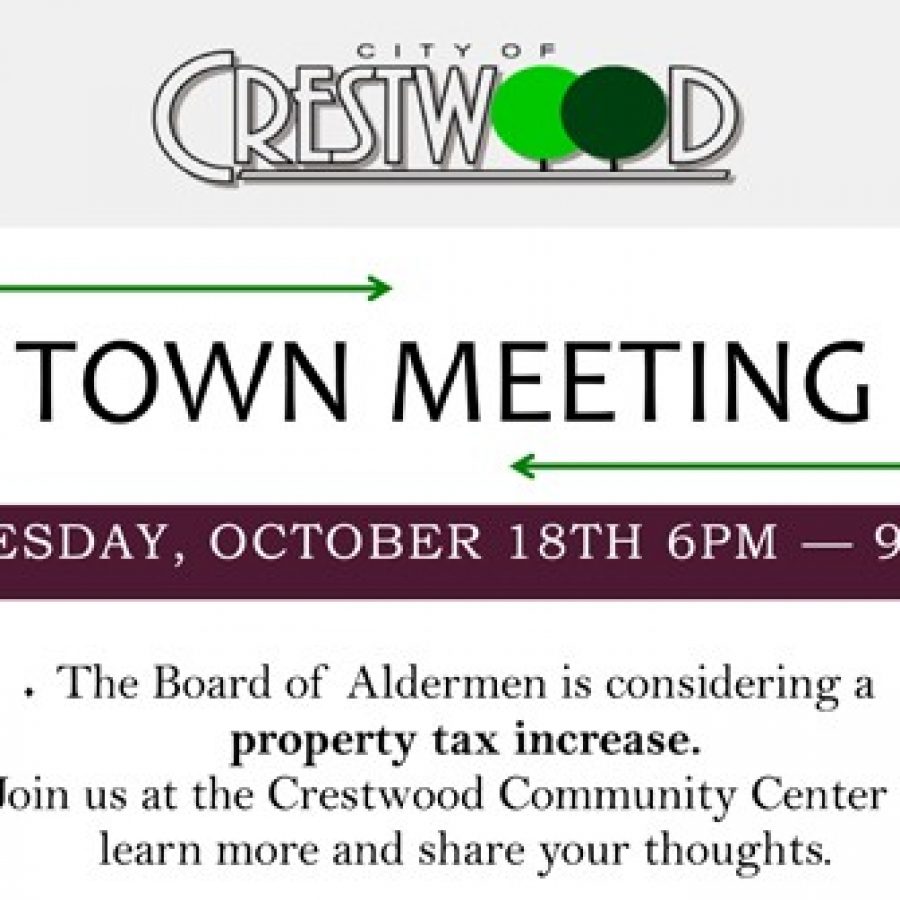 A town meeting to obtain Crestwood residents’ input on possibly placing a tax-rate increase before voters will take place from 6 to 9 p.m. Tuesday, Oct. 18, at the Community Center, 9245 Whitecliff Park Lane.

Of the meeting, City Administrator Kris Simpson told the Board of Aldermen last week, “I will be giving a brief presentation of the city’s financial condition and our options in terms of a property-tax (increase). It will be an informal-style event, where I will be giving, again, a very brief — hopefully, five-, seven-minute — presentation, giving a few minutes for questions.

“The idea is I present it to very small groups, so hopefully people filter in and out throughout the night, and then we will distribute ballots to those people with options for property-tax increases that they might be willing to support — from zero-, 25-, 50- and 75-cent increases.”

Easels with information about the various options will be on display, along with related information, and a ballot box for residents to deposit their selection, he said.

“Obviously, we’re hoping every alderman can attend, and the idea is — really the event is for the aldermen to get a sense of where the community’s at,” Simpson said, adding he hopes aldermen will meet with small groups of residents “so that you can ask questions and have some interaction and get a sense of where the community’s at. So we will tally up that ballot information, you’ll have your one-on-one interactions with people to kind of get a sense where folks are at.

“We’re also going to be live streaming the event on YouTube Live Events for anyone that’s not able to attend in person, and we have a means for them to electronically vote as well if they can’t attend. You can even attend from your cellphone if you have a wifi signal.”

As first reported by the Call, Simpson told the city’s Ways and Means Committee last month that the long-term financial outlook for Crestwood is “grim.”

During a subsequent Board of Aldermen work session, Simpson reviewed information he presented to the Ways and Means Committee that projects a $7.1 million deficit in the city’s general fund from 2017 to 2021. Among the assumptions used to arrive at that projection were providing current levels of service, employees progressing on the city’s pay plan when eligible, a 2-percent increase annually to the pay plan matrix, modest economic growth and average weather.

Those assumptions did not include any potential revenue from the redevelopment of the former Crestwood Plaza site.

Members of the Ways and Means Committee had requested that Simpson include in his projections some of the revenue anticipated from the redevelopment of the mall property. Chicago-based UrbanStreet Group, which purchased the mall for $2.265 million in 2014, plans a $104.3 million mixed-use redevelopment project for the site.

Six months later, however, Mayor Gregg Roby said he’s not ready to count on any revenue from the project at this time, as the only thing city officials know for certain about the mall site is that the buildings there are being demolished.

The city received an estimate of revenues the mall site would generate in a cost-benefit analysis prepared by its planner, Peckham Guyton Albers & Viets, or PGAV, and Simpson said he was using 50 percent of that estimate.

Anticipated revenue from the mall and a 50-cent tax-rate increase would reduce the projected five-year deficit to $1.1 million.

Fifty percent of PGAV’s anticipated revenue from the mall site and a 75-cent tax-rate increase would result in a $1.2 million surplus, according to Simpson’s projections.

However, the city administrator recommended against using anticipated revenues from the redevelopment of the mall site as a decision-making tool regarding a proposed ballot measure.