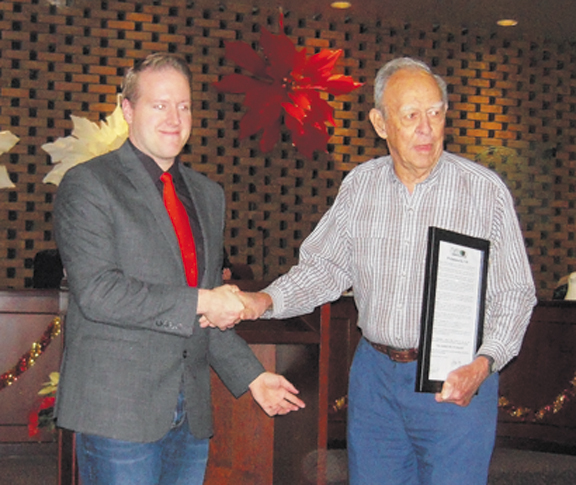 Crestwood Board of Aldermen President Justin Charboneau, left, congratulates longtime resident Robert Deutschmann on receiving a proclamation recognizing his contributions to the city over the past 58 years. Mike Anthony photo

Crestwood Mayor Gregg Roby and the Board of Aldermen last week honored a longtime resident who recently moved from the city.
Robert Deutschmann, a 58-year resident of Crestwood, was honored Dec. 12 with a proclamation recognizing his “lifelong commitment to civic engagement and service in the city of Crestwood.”
The 90-year-old Deutschmann is a former Ward 2 alderman who until recently had been a fixture at Board of Aldermen meetings, “where he frequently contributed meaningful suggestions on city issues, gaining communitywide respect, and often reminded elected officials that ‘cooperation is not capitulation,’” the proclamation stated.
He and his wife, Arline, raised six children in their Crestwood home, according to the proclamation, which also cited his service to the St. Elizabeth of Hungary Catholic Church, “where his active participation in parish life included initiating the ‘Souper Sunday’ collection for the poor, serving and ushering at Mass, as a member of the gardening committee, men’s club and parish council …”
The proclamation also noted Deutschmann’s contributions as a “civic-minded citizen,” including “displaying campaign signs in his yard and canvassing door-to-door on behalf of candidates and causes he supported, as well as always willing to help as an Election Day poll worker, ready and willing to serve lengthy shifts at his favorite place, Crestwood City Hall.”
Besides his service at St. Elizabeth, he was a member of multiple community and professional organizations, including the Teamsters union, Toastmasters and Knights of Columbus.
An Army veteran, Deutschmann served in Germany from 1945 to 1947 as a member of the post-World War II occupation force there.
On Nov. 7, with his sons’ help, he moved out of his Crestwood home to join and help care for his wife, who is currently in the Breeze Park Senior Living Community in St. Charles.
The proclamation stated, “… It is the city’s privilege to honor Mr. Robert Deutschmann for his numerous civic contributions and dedicated service to the City of Crestwood and his parish community over the 58 years he has called this city home.”