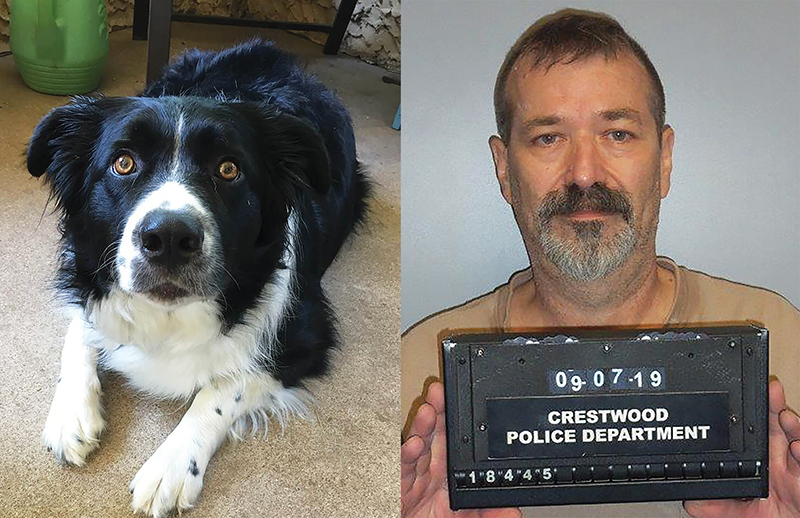 St. Louis County prosecutors charged John Conrad Ross III, 59, of the 9700 block of Greenview Drive in Crestwood, with two felonies: unlawful use of a weapon and animal abuse that included mutilation while the animal was still alive. Bond was set at $2,500.

Prosecutors allege that Ross stabbed Teddy — a 3-year-old, 75-pound black-and-white border collie — seven times Saturday with a pocket knife while the dog’s owners watched, according to a police report from the Crestwood Police Department.

Robin Steele, who lives next to Ross, went to the Crestwood Police Department around 2:38 p.m. Saturday to report her neighbor for animal abuse and stabbing her dog to death.

She said that she and her husband were in their garage around 11:55 a.m. when her stepson’s dog Raven ran out of the house, followed by Teddy, and headed to the neighbor’s property, which is not separated from their  house by a fence.  Steele said she yelled for the dogs as she saw Ross appear to go toward Raven and try to grab the dog. Raven took off away from Ross, who then chased after Teddy.

The neighbor grabbed Teddy out farther into his yard and “slammed him to the ground and appeared to punch him,” then he turned around and stabbed Teddy repeatedly while staring at Steele and her husband, according to Steele’s witness statement in the police report.

“For reasons I will never understand, the neighbor moved forward on my dog, grabbed him by the scuff and threw him to the ground and stabbed him in his jugular while he was looking back at us with a evil look,” Steele posted on Facebook that day.

Her husband told police that he saw Ross holding Teddy by the scruff of the neck, and the man yelled “No!” while Ross looked “straight at him.” He also said that Ross stabbed the dog while staring at the owners.

Teddy managed to get away and ran to the couple, “blood gushing from the stab wounds,” according to their account in the police report. ‘

Meanwhile, as for Ross, “after he stabbed my dog, he then stood on his property line with a gun” and a “cold look,” Steele wrote on Facebook.

As for Teddy, “Amazingly he responded to my call to come with his tail wagging, and happily got into my car to go bye-bye to the hospital,” Steele posted on Facebook.

Steele and her husband rushed the dog to the animal hospital, where a veterinarian found he had at least seven stab wounds, including one to his jugular vein. He had to be euthanized due to his many wounds.

The husband took photos of the blood on the driveway before washing it off, which the police took into evidence.

Steele told police that Teddy would never act aggressively toward a neighbor because he was the “sweetest dog ever” and “would only ‘lick someone to death.’”

She posted on Facebook about Ross, “I’ll never understand the ‘why’ of this crazed individual’s behavior… I would like for everyone to share this post and get the word out about this crazy bastard.”

But she said the Crestwood Police Department displayed “professionalism and empathy,” and she was satisfied with its investigation.

When Culp went to Ross’ house to ask him what happened, Ross gave a different story than Steele: He said that he was standing by the van parked behind his house when Teddy and the other dog came up to him, and Teddy started biting him on his right hand, so he stabbed the dog in self-defense.

Culp said he asked where the blood was if the stabbings happened near the van. Ross then changed his story to say that he had chased Teddy 75 feet deeper into his backyard before stabbing him.

The officer said he asked Ross to see a pocket knife clipped to his inside right pocket, and Ross handed it over and confirmed it was the knife he used to stab the dog. He told the officer that he had washed the blood off the 7.5-inch knife, which had a 3-inch blade. Culp seized the knife for evidence.

Ross also confirmed to the officer that he stabbed the dog “six or seven” times and that  he owns a black 1911 model handgun. Police said he agreed that after the stabbing, he stood and stared at the neighbors while holding his gun.

But the officer said beyond that, Ross appeared unwilling to go into more detail about the incident when asked.

When the officer questioned why the man didn’t call the police himself, Ross asked, “Why?”

Ross had two bandages on his right hand. The officer said the marks underneath appeared to be scrapes or cuts rather than bite marks.

The officer arrested Ross at the scene and put him in the back of the patrol car.

Since Bell took office, he has abolished cash bail in many cases. Police now have to spell out why a person arrested is a danger to the public or the victim if they were released on bond.

Culp said he thought Ross posed a danger to the victim in the case, Steele, because he never called police after stabbing the dog, washed the blood off the knife and admitted that he stabbed the dog “six or seven” times. Ross also corroborated Steele’s statement that he stood outside his house with a gun after the stabbing “staring down the victims, who are his neighbors,” Culp concluded.

Initially, prosecutors charged Ross with misdemeanor animal abuse since the stabbing was his first offense.

But after the dog’s owner asked members of the public to call the office of county Prosecutor Wesley Bell Tuesday and ask for a felony charge, the charge was upgraded Wednesday to the felony animal abuse charge, which comes into play when a person commits “torture and/or mutilation while animal was alive.”

The unlawful use of a weapon charge covers the knife that Ross allegedly used to stab the dog.