Crestwood mall’s plan is ‘economically viable’ and is ‘moving forward’ 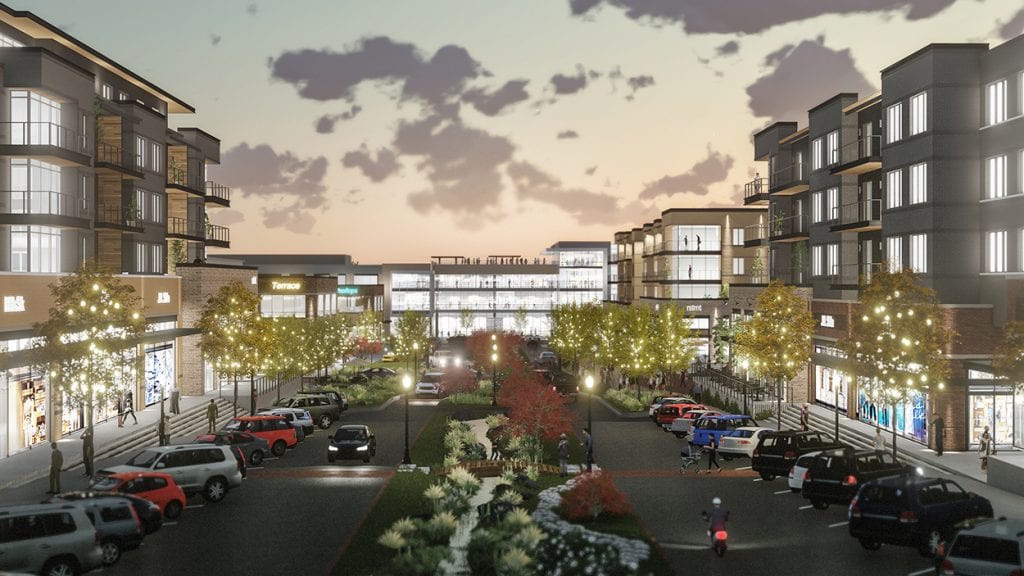 A rendering of Crestwood City Center at night.

In a meeting with city officials last week, the Crestwood mall developer said it has determined after meeting with tenants that the $300 million proposal for the site is “economically viable and ready to move forward” pending financing.

Creve Coeur-based Walpert Properties, which has the site under contract from Chicago-based UrbanStreet Group, could soon submit a tentative site plan for the proposed $300 million redevelopment of the 47-acre former Crestwood Plaza mall site to the city’s Planning and Zoning Commission, Mayor Grant Mabie said ahead of the meeting.

City staffers met with the developer Jan. 21 to make sure the plan conformed to city code.

Mabie, who is unopposed for re-election April 7, told the Board of Aldermen Jan. 14 that developments with Walpert “seem to be progressing really well” and he expects a tentative site plan to be delivered to the planning panel soon.

“They think they have their ducks in a row from a tenant perspective, and what they’re working on right now is just finalizing their financial partnerships… Once that’s done, I think we’ll be moving through a lot of things as a board,” said Mabie.

“(The site plan) may be revised based on staff comments or comments from their financial partners, but otherwise a version pretty close to that hopefully should be transmitted to Planning and Zoning subsequently.”

In a followup email with City Administrator Kris Simpson Jan. 23, Simpson said that he met with Walpert as planned and that the company confirmed it had wrapped up meetings with tenants and is working to secure enough capital funding to proceed.

“They have been meeting with potential investors for the past several weeks, and characterized those meetings as positive and productive,” said Simpson in an email to The Call. “They are confident that a partner will emerge over the next several weeks, but could not give us a specific time frame as the decision-making process is not in their control.”

Walpert did not name any specific tenants in the meeting, but said they are looking at a mix of retail, restaurants, apartments, condominiums and a large entertainment venue, Simpson said.

The developer has the mall site under contract from UrbanStreet Group since October 2018, when it unveiled its plans for “Crestwood City Center,” a high-density mixed-use development similar to the boulevard-style development at “The Streets of St. Charles.”

A year later, in October 2019, Walpert Properties partner Kent Evans told the board that the company’s plans to redevelop the vacant site have tripled in size from the previously estimated $105 million to $300 million.

At the time, Evans said the goal was to break ground in 2020 but did not elaborate when asked specifically when and how long it would last.