Crestwood firefighters come to the rescue of man in flash flood 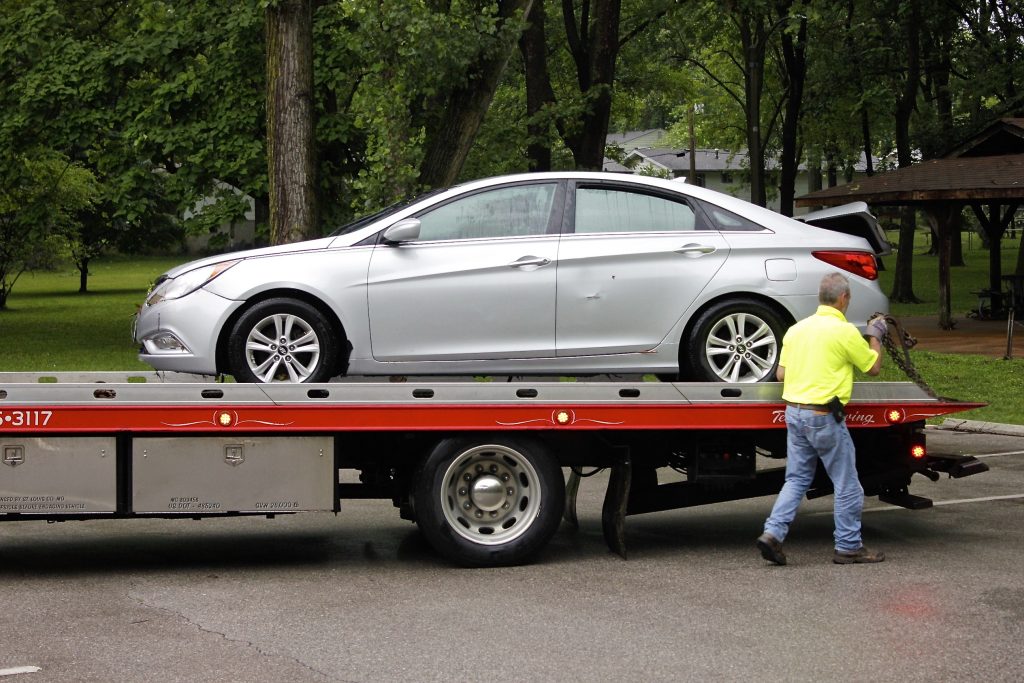 The car of the man rescued during the flash flood at Whitecliff Park is towed from the parking lot. Photo by Erin Achenbach

Flash flooding caused by heavy rains last week led to an emergency water rescue for one man in Crestwood.

The Crestwood Fire Department received the call for a rescue at 3:56 p.m. June 26 after police were called with reports of a man yelling for help in a parking lot at Whitecliff Park near Gravois Creek, Fire Chief Lou Hecht said.

Flash flooding caused the creek to spill over its banks, trapping the man near his sedan, which was beginning to float due to the flood waters.

Two Crestwood firefighters, suited up in water-rescue gear, made their way out to the man and were able to lead him back to dry ground.

A minivan also parked in the flooded parking lot prompted a search for its owner. Crews were set up along Gravois Road to see if anyone was floating down the creek and once the waters receded, crews went out on foot into the creek to see if they could locate the owner of the van.

Emergency crews also broke one of the van’s windows to make sure no one was trapped inside the vehicle. Using the van’s license plate, police tried to contact the owner but their calls did not go through.

Eventually, the owner of the minivan was located safely at Grant’s Farm with her family and a dead cell phone.

Due to the nature of the call, firefighters from Valley Park, Fenton, Mehlville, Affton, Metro West and Metro EMS and Fire responded to the scene. The rescue and cleanup, including towing the two vehicles out of the lot due to damage they incurred from the flash flood, lasted from the initial call at 3:56 to 6:30 p.m.

About 40 people stranded at Grant’s Farm did not require rescue.

The creek rescue comes on the heels of water rescue training that the Crestwood Fire Department conducted in May.

“This was probably not an area where we would ever expect to have to conduct a water rescue, but everyone was prepared and performed admirably during rapidly changing conditions,” said Mayor Grant Mabie.

Over two inches of rain fell across the South County area in the span of an hour, prompting the National Weather Service to issue a flash flood warning that lasted through that evening.

Several creeks in the South County area rose close to or at flood stage, including Martigney Creek in Oakville, Mackenzie Creek in Shrewsbury and Gravois Creek along South County.

“We always tell people never ever travel in your vehicle through any water. All it takes is a few inches for the car to float.”