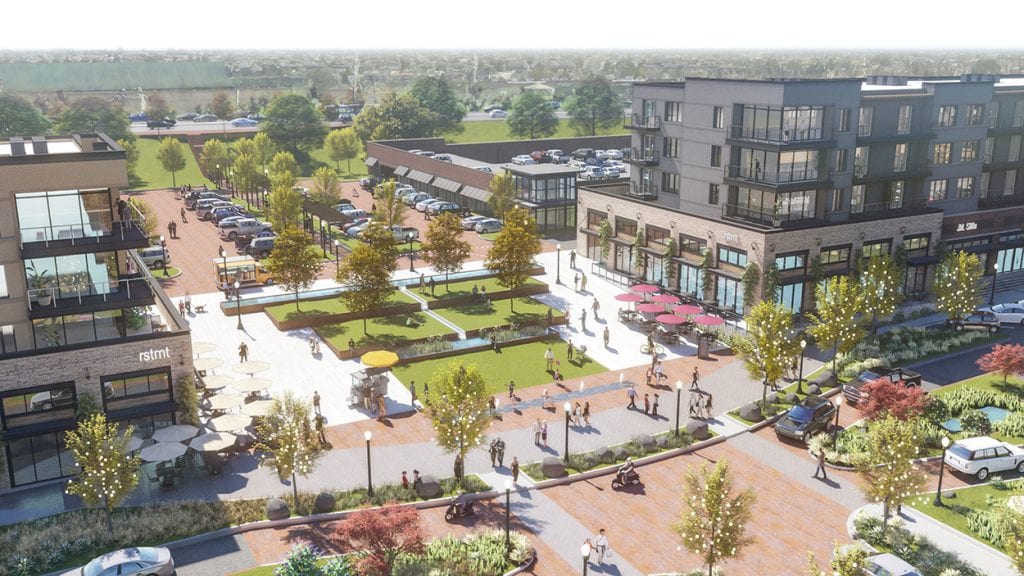 Real-estate brokers lined up last week at the old Crestwood mall site to get the first look at Walpert Properties’ new redevelopment plan for the site, which it’s calling “Crestwood City Center.”

With people living, working and dining there 24 hours a day and seven days a week, Walpert is advertising Crestwood City Center with the tagline “The center of it all.” The target date for completion of the offices is January 2020.

The plan was unveiled for the first time at the Oct. 3 broker open house, then released on the developer’s website, crestwoodcitycenter.com.

Creve Coeur-based developer Walpert has the 47-acre property at the corner of Watson and Sappington roads under contract from current Chicago-based owner UrbanStreet Group, contingent on signing up other anchor ten-ants for office and retail uses.

“I’ve got some energy for this thing,” Walpert developer Kent Evans said at the open house. “People heard about this and they’re tracking us down.”

Walpert is primarily a residential developer and plans 250 apartments for “luxury living” at the site, which is in Lindbergh Schools. The previous $115 million proposal from UrbanStreet was more of a “high-end strip mall,” while Walpert plans to have “people living and working on a site that replicates some of that urban feel,” said City Administrator Kris Simpson. “I’m excited about the density, and I’m excited about the vision.”

Anyone attending the open house without knowing who owned the mall would assume it already belonged to Walpert. The company’s developers made no mention of UrbanStreet in their presentation or on any of the signage around the mall site.

Real-estate broker Pam Hinds of the site’s broker, Balke Brown & Transwestern, detailed the history of the mall, which was known to most customers as Crestwood Plaza. But she didn’t mention the years that the mall sat vacant or covered in dirt mounds.

“It’s time to turn the page,” Hinds told the group of brokers.

Officials representing the city at the event included Simpson, acting Mayor Tony Kennedy, Planner Adam Jones, along with one alderman from each ward — Richard Breeding of Ward 1, Mary Stadter of Ward 2, Grant Mabie of Ward 3 and Ismaine Ayouaz of Ward 4.

Kennedy got a big round of applause from his fellow real-estate professionals at the event, and he noted in his welcoming remarks that 10,000 people had attended the mall’s going-away party in 2016, the Food Truck Party at the Plaza.

And unlike with Chicago-based UrbanStreet, one of those reminiscing about the mall is also helping to develop it.

Design consultant Chris Cedargreen said he was a self-professed “mall rat” during the 1980s, riding his bike along Watson to meet up with friends and hang out.

“It’s personally a little surreal to be standing here… It’s a weird thing to bring this back to life,” Cedargreen said.

Simpson said the city is taking a tone of “cautious optimism” with the new plan and believes that Walpert’s enthusiasm only helps the chances of the project happening.

“They framed the project in a really positive light, I think the right light,” he said.

The major players in St. Louis real estate were all in the crowd, including Sansone Group, Pace Properties, G.J. Grewe and Berkshire Hathaway.

“The right audience was here,” said Mabie, who is running in the Nov. 6 special election for mayor. “I haven’t seen this many Beamers or Mercedes parked in a parking lot in a long time.”

Developers noted at the event that they are choosing to focus the redevelopment around a variety of smaller mixed uses like medical offices and a movie theater rather than anchoring it around a single big-box retailer, which seems to be a thing of the past and already saturates Kirkwood next door.

The two previous proposals for the mall, “The Crest” from UrbanStreet and “The District at Crestwood” from Centrum Partners, both unsuccessfully tried to include large big-box retailers as anchors at the site, without success.

Two office buildings that total 240,000 square feet are planned, along with 42,000 square feet for entertainment. The development would have one four-story and two two-story above-ground parking decks since the underground garage at the site was filled in during demolition.