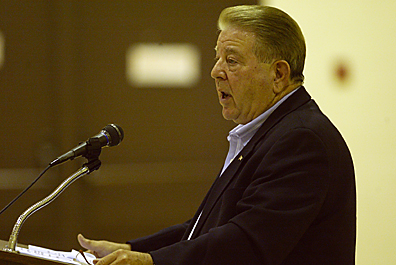 The Board of Aldermen is scheduled Tuesday to consider the city-recommended elimination of the Crestwood animal control officer position.

It’s part of a five-year plan proposed by Crestwood officials to cut costs during a period of declining city revenues.

Approved by the board in February, the plan aims to reduce Crestwood’s budgeted expenditures by more than $2 million annually over the next five years.

But Mayor Roy Robinson told residents at a town-hall meeting last week that he wasn’t willing to let go of local animal control.

“I’ll be upfront with you — I support animal control,” he said. “One of the reasons why we control our city is that we are a charter city. That’s called self-rule, self-governing. And when you provide services, you don’t go out and look for others to provide these services. You do it yourself.”

In an August memo to Robinson and the board, City Administrator Jim Eckrich wrote that the city decided to recommend cutting local animal control because the city “can obtain animal control services from St. Louis County at no (additional) cost.”

“There’s very few people that would consider it a service at all, because they just don’t do anything for you,” the mayor said of the county animal control. “On paper, they say that they will provide you with animal control services, but they surely don’t — not at the level we’re used to in this community.”

The county employs 15 animal control officers that serve 875,000 to 900,000 residents, according to information provided to Crestwood officials by the county Department of Health. However, two of those positions currently are vacant.

In his memo, Eckrich also noted that none of Crestwood’s neighboring cities provide their own animal control services.

“When they pick up an animal, and it’s got a problem and they can’t handle it or whatever, they shoot it,” Robinson said. “I mean, you don’t hear anything about this, but it’s done. There’s a report made, and they shoot the animal. And that’s how they take care of your pets that get out.

“And it’s all perfectly legal, because they make a report, and it says (the animal was) shot by a city-owned weapon, and that ends the deal with the pet. Now, most of us don’t want our pets to be shot in that manner unless they are attacking people, or the police officers feel threatened, I have no problem with that. But to get rid of animals with that method doesn’t sit well with me.”

Contacted by the Call, police officials in both Kirkwood and Webster Groves clarified that officers would shoot an animal only if it were dangerous and all other efforts to control it had failed.

“Kirkwood police handle all complaints received regarding animals, and then depending on each particular situation, if the animal is confined wherever the call would be, then we do notify (county) animal control where they can retrieve the animal,” said David Smith, Kirkwood detective and public information officer. “Otherwise it’s brought here to the station where then animal control is notified and they respond to our station where they can come pick the animal up.

“It’s like with every police department. You do what you can, unless there’s an immediate danger to the safety of the officer or the safety of other citizens, and then the necessary steps are taken to control the animal. And then as a last resort only, lethal force can be used. But all other steps are exhausted before that.”

Crestwood once employed two park rangers, one full-time and the other half-time, to assist its animal control officer. But those positions were eliminated in late 2005.

“Because of these staffing cuts it was not possible for animal control to offer its services seven days a week,” Director of Public Works Dzenana Mruckovski wrote in a July memo to Eckrich, who had asked public works staff to analyze animal control operations in the city.

Crestwood animal control’s hours, as a result, were cut back to 8 a.m. to 4:30 p.m. from Monday through Friday. City police provide animal control services after-hours and on the weekends, while Animal Control Officer Suzie Sutton remains on-call for emergencies. Volunteers also work at the Whitecliff Park shelter on the weekends, tending to animals and cleaning the facility.

Sutton is paid roughly $49,000 in salary and benefits.

In its analysis, the public works department concluded that, should aldermen decide to keep animal control local, the administration would need to adjust the city’s 2010 budget to include a few recommended expenses:

• $21,000 to hire a part-time park ranger to work roughly 20 hours a week and assist Sutton with her daily duties, “especially when it comes to off-hours and weekend work that is currently performed by our police department”

But the city also would have some adjusting to do if it ceased local animal control, Mruckovski stated. Besides repealing the animal control code and adopting the county’s rules, the city would have to vacate the Whitecliff Park shelter because the county doesn’t have the means to “manage another facility,” she wrote.

Currently, stray animals picked up in Crestwood are taken to the Whitecliff shelter and, if unclaimed after seven days, are then either put up for adoption or transferred to county animal control, the Humane Society or the Animal Protective Association, according to the city’s animal control code.

Besides the Whitecliff shelter, the city also would have to decide the fate of more than $14,500 in the Friends of Animals Fund. Established by Margie Theiss in 1979, the fund aids local animal control with veterinary care of impounded animals and injured wildlife, including vaccinations and neutering procedures.

“Since our organization has been formed to support animal control, we urge the board and everyone to keep animal control services here in Crestwood, largely because we have such a higher level of service here than St. Louis County can provide,” Wheat said.

The organization is awaiting approval of an application for not-for-profit 501(c)(3) status with the Internal Revenue Service.

Supporters also have circulated a petition around Crestwood and say they have more than 400 residents’ signatures in favor of keeping the animal control services local.

At one point during last week’s town-hall meeting, a resident asked Robinson if Crestwood could provide animal control services to Sunset Hills and ask the city to share the cost.

“I’m not sure they’d want to be involved,” the mayor replied.

“I really don’t care whether other cities around us or anybody else has it,” he said. “We’re unique, we’re self-governed and we want to keep our service to where we feel protected and our animals are treated properly.”