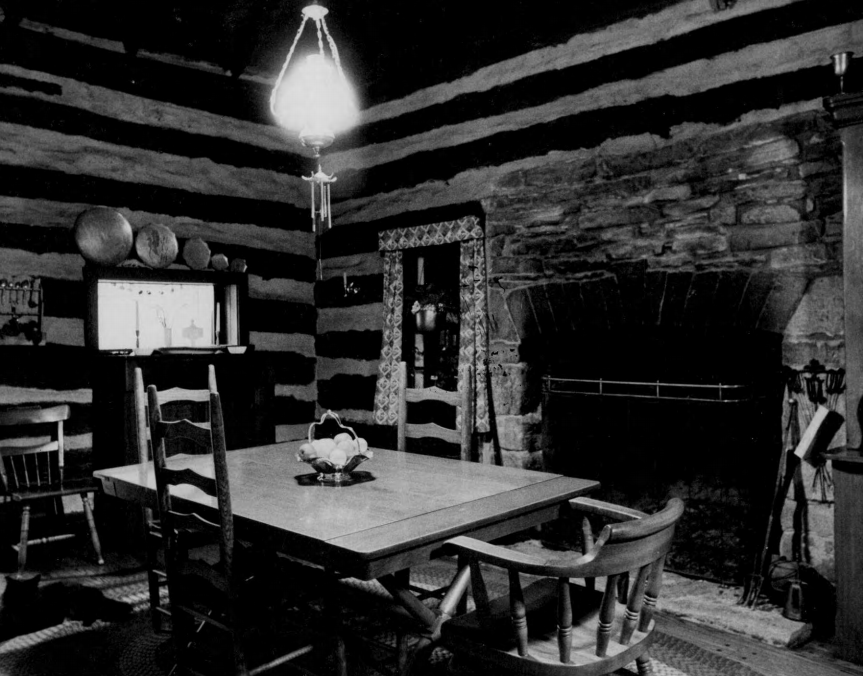 In this black-and-white photo submitted in the 1980s to the National Register of Historic Places, the kitchen in Joseph Sappington's cabin in Affton is visible through a pass-through.

Plans to move a historic log cabin from Affton to Crestwood moved ahead as the Crestwood Board of Aldermen approved a letter of intent for the $200,000 relocation plan at a special meeting Tuesday.

The letter of intent is non-binding, but shows the city is still interested in the project. Crestwood has until May 25 to make a final decision whether or not to move the two-story Joseph Sappington log cabin, built in 1816, from 10734 Clearwater Drive in Affton to Historic Sappington House Park in Crestwood, 1015 S. Sappington Road. The house must be moved by Aug. 1.

Cabin owner Jim Freund first approached the city in October to offer the house for free, on the stipulation that the city pay to move it to the city-owned property. Joseph Sappington appears to be a cousin of Thomas Sappington, whose house is currently showcased at the park and serves as the Sappington House Museum, although historic records do not document the exact relationship in the large family.

Phase 1 of the project, relocation, is estimated to cost $200,000, with additional costs to convert it into a public-facing museum during Phase 2. City Administrator Kris Simpson told The Call that some internal cost estimates show total costs exceeding $400,000. The Sappington House Foundation has been fundraising to help with the relocation and transition into a museum, and so far have raised $4,060 via a GoFundMe.

The specifics of how much the city will pay and how much the Sappington House Foundation, the nonprofit that runs the city-owned museum, will be expected to fundraise have not yet been determined.

“When you let knowledge in, great things happen. In this throwaway world, let’s champion this cause and work together to preserve and share history,” said Dyann Dierkes, president of the Sappington House Foundation. “It will set Crestwood up to be a more attractive and endearing community for citizens and businesses alike — a community that just doesn’t simply discard history but embrace it.”

The Crestwood Parks and Recreation Board recommended the relocation Feb. 16, and on March 9, aldermen voted 5-3, with Charboneau, Duncan and Ayouaz opposed, to direct Simpson to further research the cost and impact of moving the house ahead of the Aug. 1 moving deadline.

City officials said they were not aware at that time of an April 1 deadline Freund imposed on the city approving a letter of intent. When they found out about that deadline, they had to call the special meeting to come to a decision. City Attorney Lisa Stump reviewed the audio and minutes of the March 9 meeting and decided that the board vote at that meeting was not enough to approve a letter of intent.

“Apparently the homeowner has made that request but not through city channels,” said Mayor Grant Mabie at the videoconferenced meeting March 30, adding, “So while it is frustrating that we had to call a special meeting for that purpose, apparently the homeowner has made this request known through certain channels for awhile, which is why we are here today.”

Charboneau, whose ward is where the Historic Sappington House Park is located and where the log cabin would be moved, said that he felt the city was already going above and beyond to meet Freund’s deadline and did not “deal well with threats.”

“I don’t appreciate being bullied into a situation when the city has already made substantial commitment,” Charboneau said.

Stadter, who shares a ward with Charboneau, said that the benefits outweighed the risks when it came to moving the cabin.

“This is a lot of money and it’s a big investment, but I think that the benefits … to our city, the ability to save this piece of history … outweigh the risks,” said Stadter. “I think we would be remiss not to move forward with this, so it has my support.”