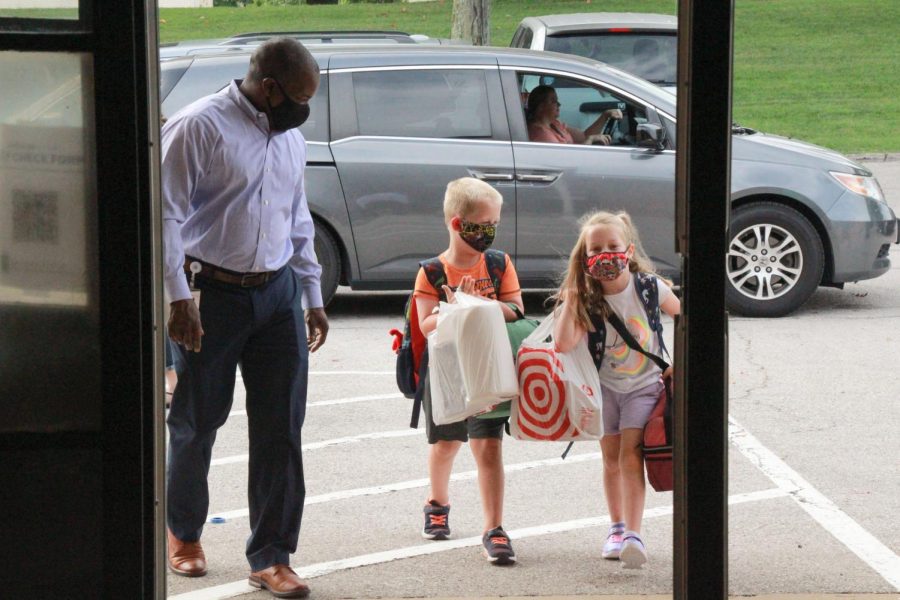 Lindbergh's Kennerly Elementary Principal DeAndre Thomas welcomes back some of the K-3 students who started class on Aug. 27, 2020.

Two Catholic elementary schools in Crestwood and Shrewsbury have reopened after temporarily shutting down in-person school for online learning after a positive COVID-19 case.

Our Lady of Providence in Crestwood and St. Michael the Archangel in Shrewsbury, which are part of the larger five-campus Holy Cross Academy run by the St. Louis Archdiocese, closed the week of Labor Day, Sept. 7, after a traveling teacher tested positive for the coronavirus. After continuing to be closed last week, the schools have now reopened, the Archdiocese confirmed.

In a change that went into effect this school year, St. Michael takes all K-2 students enrolled in Holy Cross Academy, while Our Lady of Providence teaches all students in third grade through fifth.  The former St. Dominic Savio School, now known as St. John Paul II, is the early-childhood center for all parishes in the academy.

The two campuses closed on the advice of the St. Louis County Department of Public Health, after a traveling teacher shared between both schools visited both campuses and later had symptoms of the virus.

First, a person from the St. Michael campus tested positive for COVID-19, the Archdiocese said, while declining to confirm whether the person was a teacher or a student. The traveling teacher who had been to both campuses later started experiencing symptoms and was a close contact of someone who tested positive for the coronavirus.

With that in mind, the health department directed the school leadership to temporarily close the two campuses “out of an abundance of caution.”

The Archdiocese declined to discuss what measures it is taking in its schools to prevent outbreaks because “out of respect for government health regulations, we are not discussing additional specifics related to COVID-19 at individual schools,” a spokeswoman said.

Of the private Catholic schools that are open for in-person school, less than half of the schools have had a COVID-related event, which covers positive tests and possible exposures, the spokeswoman said.

“The response, by our families, teachers, principals and presidents, has been an incredible show of unity and strength in our school communities,” the spokeswoman said. “The sharing of information and support by all of these groups has prevented the spread of the virus in nearly all instances, allowing our schools to continue to provide a quality, faith-based education in the safest possible environment.”