COVID-19 cases continue to rise in every South County ZIP code; task force singles it out as pandemic hotspot 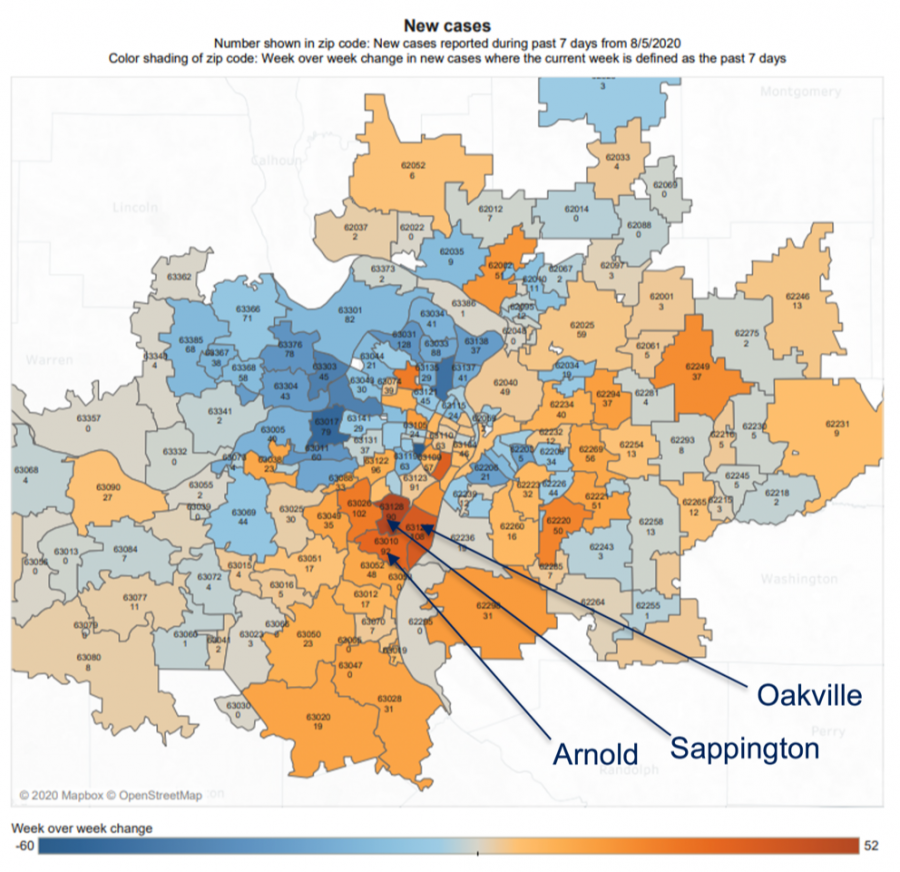 The slide shown by the St. Louis Metropolitan Pandemic Task Force last week that singled out South County as a coronavirus hotspot.

Coronavirus cases have continued to rise in South County in the week since it was singled out as a virus hotspot in the St. Louis metropolitan region, even as cases began to decline in other areas.

Reporting data on case counts and hospital admissions from the four major hospital systems that make up the St. Louis Metropolitan Pandemic Task Force, Dr. Alex Garza, the SSM Health CEO who commands the task force, applauded a seeming downturn in those numbers in most places in the region, but said at his Aug. 10 briefing that the St. Louis region’s “red zone” had switched from St. Charles County to South County.

He specifically singled out Oakville, Sappington, Fenton and Arnold as notable areas of high transmission since the beginning of August, while other areas outside of South County started to decline.

The gold standard in establishing trends in the coronavirus, the seven-day rolling average of hospital admissions, had gone down for several days in St. Louis for the first time in more than a month, an achievement celebrated by Garza — although that overall number started to trend upward again near the end of the week.

But the “promising trends in our regional data” as of Aug. 10, including the modeling the pandemic task force has been working on, “gives us a little bit of hope that we’re starting to turn the tide” in COVID-19 cases, Garza said. He attributed the lower numbers to the mask mandates in St. Louis County and St. Louis city, which went into effect in early July, and called it a “good sign that we’re starting to flatten that curve” on the pandemic.

“We’re not seeing a huge drop, but we are starting to see it turn,” Garza said, although he cautioned that “there’s so much virus circulating right now that it’s going to take a little bit of time before you really start seeing significant drops.”

But in data separated by ZIP code, South County stood out — and not in a good way, Garza said.

“You’ve seen us in weeks before where it was out in St. Charles County and Chesterfield, and now the numbers seem to be increasing down in South County,” Garza said. “I’ll point out a couple of areas here where we’ve seen some increase — Arnold, Sappington and Oakville is where we saw the increase in numbers week over week.”

He specifically cited Oakville’s ZIP code 63129, the Concord ZIP code of 63128 and the Arnold ZIP code of 63010 as trending sharply in the wrong direction. He also said that Fenton had seen a rise of 102 new cases the week before.

Mehlville School District Superintendent Chris Gaines had cited the rising cases in South County — a trend he had tracked since the beginning of July, mirroring the overall rising trend in the county — as a reason for the district to start all its classes online. Mehlville is the school district for Oakville’s 63129 ZIP code and shares the 63128 ZIP code with Lindbergh Schools.

The pandemic task force is not holding briefings this week, but the trend of COVID-19 cases has continued to rise in South County in the week since Garza singled it out as a hotspot.

But data on a COVID-19 tracking website at St. Louis University’s website shows that cases have continued to rise in South County over the last week, with the rate of cases per 1,000 residents going up in every South County ZIP code.

The best way to prevent COVID-19 transmission is to avoid large gatherings, wear a mask, wash your hands and stay at least 6 feet apart from people outside your household, Garza emphasized at all his briefings last week.