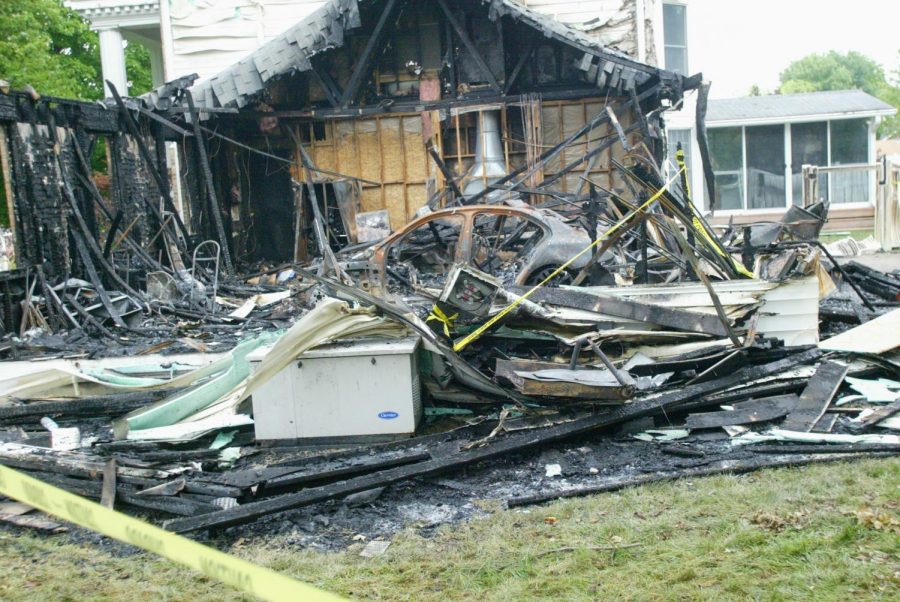 The remnants of a garage and a car inside it destroyed in a fire Monday, seen the day after the fire.

An Oakville couple and their cat are safe after a fire destroyed their garage during the storms that swept through South County Monday night, leaving some households without power for days.

The call reporting the fire at the intersection of Christopher Road and Schnell in Oakville came in to the Mehlville Fire Protection District around 6:30 p.m., said Assistant Chief Dan LaFata. When crews arrived, an attached garage was fully engulfed in flames.

“They quickly started their fire attack and prevented the fire from spreading to the living area of the home and to the neighbor’s house,” LaFata said of the firefighter response.

The couple who lived at the house made it out safely. Firefighters rescued a cat from inside, and no injuries were reported to the homeowners, pets or first responders.

The cause of the fire is still under investigation but is not considered suspicious — some at the scene believed it was caused by a lightning strike.

The couple’s car was destroyed inside the garage, and the damage extended to the side of the house and the fence too. The heat of the fire melted siding on the neighbor’s house.

The Rock crews responded to 84 calls in a 48-hour period during the storm, including a transformer explosion behind Waste Management in Arnold off Lonedell Road during a utility pole fire. No one was hurt during that fire and explosion.

Although some South County residents were still without power Thursday, the few outages reported by Ameren Friday appeared to be unrelated to Monday’s storms.