County sets a precedent for storage units to look better; Gravois up first

Storage facility would have to upgrade look of facade 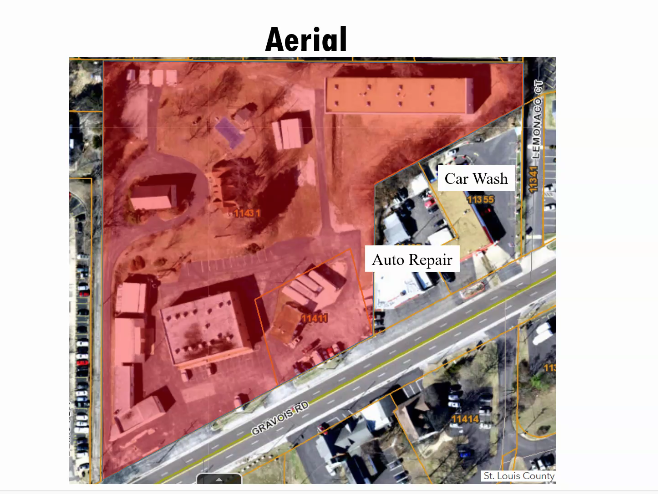 After a series of self-storage facilities have been opposed by neighbors across South County in recent years, one proposed along Gravois Road in Sappington is the first in unincorporated St. Louis County to face stricter design recommendations from county planners.

The county Planning Commission voted unanimously 7-0 March 8 to recommend approval of a plan from developer Dan Wagner for Gravois Self-Storage, a 120,000-square-foot self-storage facility at 11411 and 11431 Gravois Road. But the recommendation made by the county Department of Planning came with more strings than have been required for past self-storage facilities.

County planner Jacob Trimble said March 8 that the department recommended approval with the caveat of architectural review and “significant improvements. … Particular note and concern for staff was the visual appearance.”

Developers said the building would be made of 2.5 inches of insulated metal panel in two colors, with a brick accent.

But Trimble displayed top-of-the-line facades for self-storage facilities, none of which exist in unincorporated St. Louis County, and said that the Gravois facility should have that caliber of appearance too.

The developer will have to use “real fenestration,” or doors and windows that make a building look better, on no less than 35 percent of the front of the building as well as the first 100 feet along both sides. The rest of the building has to be brick veneer, stone or “other type of high-quality design,” Trimble said. Awnings or “some other form of embellishment” to make windows look better would also be required as part of the architectural review.

“If you notice, these self-storage facilities nowadays, it is fairly common for them to have significant amounts of fenestration — with accent lighting it can actually be quite attractive,” Trimble said while showing the commission photos of facilities elsewhere. “This is the quality of self storage facility that is out there and that staff finds would be appropriate to create that recommendation for our jurisdiction as well.”

Decorative fencing will be required around the site, with a stipulation for siteproof fencing on the border between the site and the single-family houses.

Concerned by the amount of pavement, Trimble said staffers are requiring more landscape buffering in the front and back.

The developers proposed loading bays in back and front, and Trimble said that only loading bays at the side or back will be allowed, with interior loading only. The department generally disapproves of front loading bays for any use in the county.

All signs would have to be monument signs to look better along Gravois.

But overall, the county sees a self-storage facility as a good use of the site, Trimble said. He said the nearly 5-acre site is “an oddly shaped site with a significant number of buildings currently on the site.” Most commercial that fronts Gravois nearby is brick-fronted, which is another reason the county wanted to keep a brick look.

“You’ve done a very nice job of looking at the finishes of the building, I think that’s critical for that — for that development to really be appropriate,” said commission member Bill Sneed, who lives in Oakville.