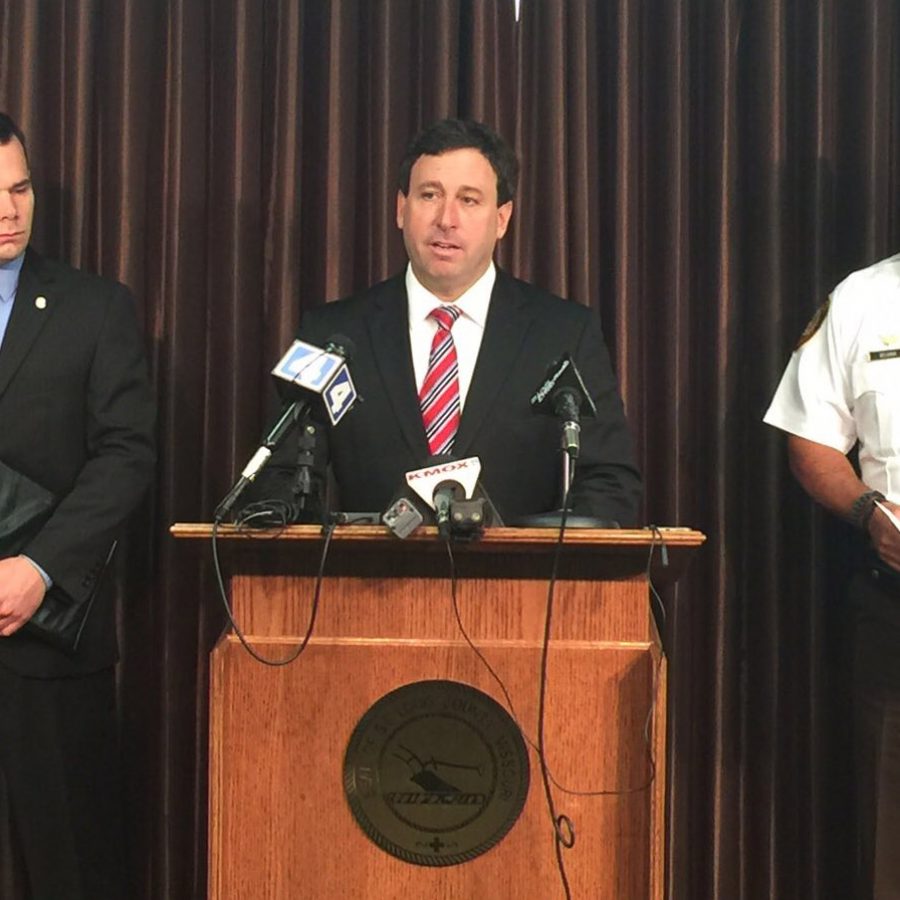 County Council members considered and rejected delaying two new police precincts promised under Proposition P so that they could give higher raises to employees.
That is one of several juggling acts they are weighing for the $696 million county budget that still awaits their approval.
Led by council Chairman Sam Page, D-Creve Coeur, council members hope they can move money around in next year’s budget to give at least a partial raise to employees who are not covered under money from Proposition P, the new countywide sales tax for police and public safety.
Police officers will see average raises of 30 percent with Prop P funds, while civilian employees in the county Police Department are slated for 3-percent raises even as all county employees in non-public-safety positions are set to see salaries frozen for the third year in a row.
To free up room for raises, Page initially advocated delaying the new police precincts proposed for south and north county.
Under the plan overwhelmingly approved by Prop P voters in April, county police Chief Jon Belmar proposes to construct a new Affton Southwest Precinct to replace the aging facility the county currently rents at 9928 Gravois Road and a new North County Precinct to replace the rented one at 11815 Benham Road.
The council approved $38 million in special-obligation bonds that includes $13 million in bonds for the new precincts 5-2 Nov. 14, with 1st District Councilwoman Hazel Erby, D-University City, and 4th District Councilwoman Rochelle Walton Gray, D-Black Jack, opposed.
The Affton Southwest Precinct is in the district of 6th District Councilman Ernie Trakas, R-Oakville, and the North County Precinct is in Gray’s district.
Page and the majority of the council originally appeared to favor delaying the precincts in exchange for higher raises for civilian employees of the Police Department. But St. Louis County Police Association President Joe Patterson of Oakville urged them to reconsider their position when he came out in favor of the precincts at the meeting.
“There’s two items in here that were part of Prop P that can’t fill this room and can’t have their voices heard because they don’t have a voice, and those are the physical facilities that our police officers and civilian employees work out of in St. Louis County government,” Patterson said.
The two precincts were unprofessional and substandard when Patterson joined the force a decade ago and are now two of the “most antiquated, energy-inefficient and very-difficult-to-access police facilities we have in all of county government,” Patterson added. “These facilities are not places I would even want my own loved ones locked up in.”
The county rents both buildings from private owners, despite maintaining the entire facilities down to repaving the parking lots, Patterson noted.
Unlike the new South County Precinct on Sappington Barracks Road, the rented precincts do not have any community meeting rooms for the public to use.
“We can’t hold a public meeting if we wanted to in those facilities,” Patterson said. “We’ve just completely outgrown those facilities.”
Trakas threw his support behind the effort to build the new precincts.
“I want to state for the record, I couldn’t agree with you more,” Trakas said. “These facilities are needed, no question about it. I have every confidence they’ll be addressed in the coming year.”
The police union is not lobbying for a specific location, and is not aware of any sites that are being considered in Affton beyond rumors about a location near Gravois and Tesson Ferry roads close to the current precinct, Patterson said in response to questions from Trakas. He was also unaware of architects or design firms signed up to plan the projects.
As outlined in Belmar’s Prop P plan approved by voters, County Executive Steve Stenger asked for the county to issue $38 million in special-obligation bonds, including $13 million for 15-year bonds for the two new police precincts, as part of a refinancing of $18 million of existing debt on the Meramec Buildings Replacement Project that predates Stenger’s time as county executive. The bonds also include $2 million for highway improvements and $3 million for maintenance of police facilities and the Justice Center.
The refinancing will save the county $800,000 but will extend the life of the bonds by three years to 20 years. That allows the county to spread out payments to make them more manageable, county Administrative Director Pam Reitz told the council. The maintenance and highway bonds would be for five years.
Pooling the bond issues together saves the county money on fees and gets a better interest rate on the smaller $13 million precinct bond, Reitz said. By moving on the bonds now, the county hoped to take advantage of a dip in interest rates since the Republican federal tax-reform bill was released to the public.
The county can’t consider buying land or hiring architects for renderings of the projects until it has the money in hand, Reitz said.
Even if the precincts are delayed six months, the county would save $50,000 on interest plus extra fees over the life of the bonds by issuing them now rather than waiting, she added.
It is possible the council could issue the bonds for the precincts now and decide not to construct the new buildings later, but that would cost the county money paid in interest on the bonds in the meantime, Page noted.
Trakas and most of the council pledged their support of the buildings, but Erby and Gray said they couldn’t support them even though they saw the need.
“As much as I would like to see the police inhabit a new building, if it’s trading off possible raises for the employees, I can’t do that,” Erby said. “I’m sorry.”
Gray noted that she was not sure that postponing the precincts would help with raises since the buildings are a one-time expense, but she still couldn’t support them.
“I’m not sure that my constituents would like those new buildings when we haven’t rectified some of these other issues yet,” she said.