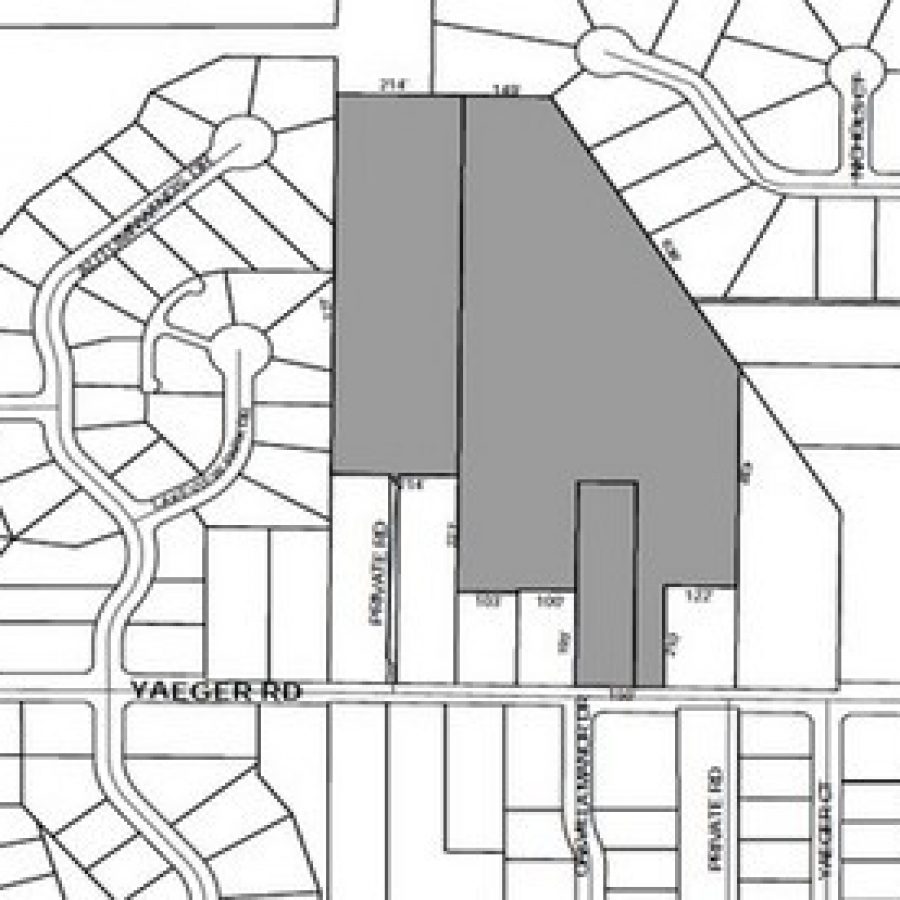 Above, a view of the Basler Tree Farm property, as outlined in county zoning documents.

The approval came over the objections of 221 neighbors who banded against Pinnacle Development’s proposed 13-acre, 41-home subdivision, Grey Oaks Estates and even formed a new group to oppose it, Concerned Oakville Residents Engaged, or CORE. The site is at Basler Nursery & Tree Farm off Yaeger Road, and residents believe the traffic will compromise the safety of the nearby elementary school.

Five Oakville residents went to Clayton to speak against the subdivision, comprising most of the night’s public speakers.

The motion to approve the development was made by Dolan and seconded by Page.

When the council approved Grey Oaks, Dolan said both residents and the developer had time to make their concerns known through the Public Improvement Committee, or PIC, process, and that he had checked with the county Planning Department to make sure the development meets county standards and laws.

Before the PIC vote, Dolan had said, “As long as they’ve got everything required by the P&Z, I personally don’t find a reason to deny this.”

The county Department of Planning, the county Planning Commission and the PIC, a council subcommittee focused on development, all recommended the plan to the council. The planning panel gave a unanimous recommendation, but the PIC recommendation was 3-1, with O’Leary opposed.

After the PIC vote, O’Leary told the Call he wanted to take a stand with the Oakville residents, but he wouldn’t necessarily stand in the way of the project’s approval, either.

“I just felt like I think it’s a good project, but to me it was more important about sticking up for the constituents, to know I’m on your side,” he said. “To me, that was the most important thing. It’s not that it’s a horrible thing, it’s going to be a good thing. I think 10 months after it’s done, they’re going to love it — but I’m just tired of some of the folks not getting heard and (county officials) not paying attention to what they’re saying.”

Some residents in Oakville still sting from the council’s 2013 approval of the National Church Residences Telegraph Road senior-housing complex at 6050 Telegraph Road despite strong opposition to the project.