Counselors team up with mom, daughter to help OMS families 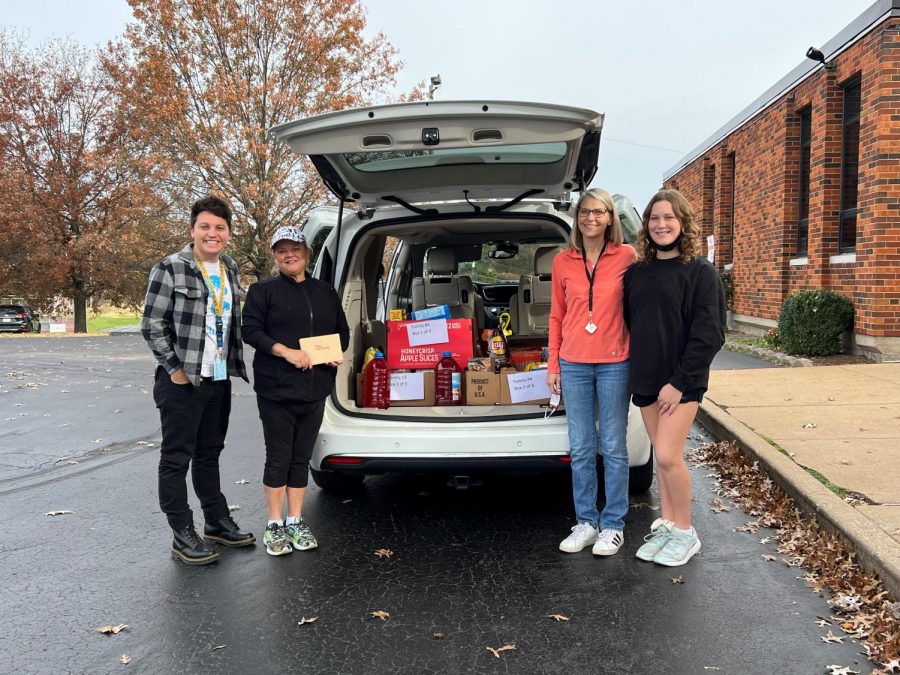 Four families with students at Oakville Middle School were able to enjoy Thanksgiving dinners thanks to the efforts of the OMS community and parent Suzi Ruth.

Ruth and her daughter Chloe collected 13 large boxes of food and over $1,500 in donations to stock each family’s pantry over the five day Thanksgiving break. Ruth has been collecting money and food/clothing items for families at her children’s schools for the past five years, and she said the $1,500 raised this year was by far the most donated at one time.

“In the past I would say ‘Donations can be left on my porch and here’s my address,’ and tons and tons of food would be dropped off,” Ruth said. “Since Venmo has become so popular, and people are busy, I think that’s why we ended up with so many donations. It was just easier to send me money.”

Any left over money was used to provide gift cards to grocery stores for the families and the amount can still cover gift cards for winter break. Ruth estimated there were around 50 contributors to this year’s donation, and around 20 percent of those people didn’t have students at OMS.

Most of the alerts and communication about donations happen through the OMS Food Collection Facebook group, which Ruth started to organize donation efforts. The link to the page can be found at callnewspapers.com and Ruth’s Venmo account is Suzanne-Ruth-1. There won’t be any specific items requested for winter break, but Ruth said Venmo donations are always welcome.

Ruth began her charitable efforts for students while one of her children was at Pointe Elementary school.

“I found out that a young man was in need of clothing — he had come to school wearing his father’s shirt and it was visibly much larger than the little boy,” Ruth said. “So I went home and posted on Facebook asking if anyone had any whatever size it was shirts … and donations started flooding in.”

She said the group organizing the donations became known as the “Mom Brigade.” As more donations came in, she would ask the school counselors to help identify specific clothing items students would need and items “would show up within an hour of posting them.”

“We have a really generous, wonderful community in Oakville,” Ruth said.

The donation process for this year’s efforts began with OMS counselors Emily Lehr and Nick Santoro, who each identified two families in need. Lehr said they know for the most part which families are in need based on relationships with students. Both agreed the amount of donations and how quickly everything was collected says a lot about the generosity of the Oakville community.

After everything is collected, Ruth and Chloe sort the food based on the needs of each family — for example, families with more small children will get more sweets like fruit snacks. Ruth said the families ranged from four to nine people this year.