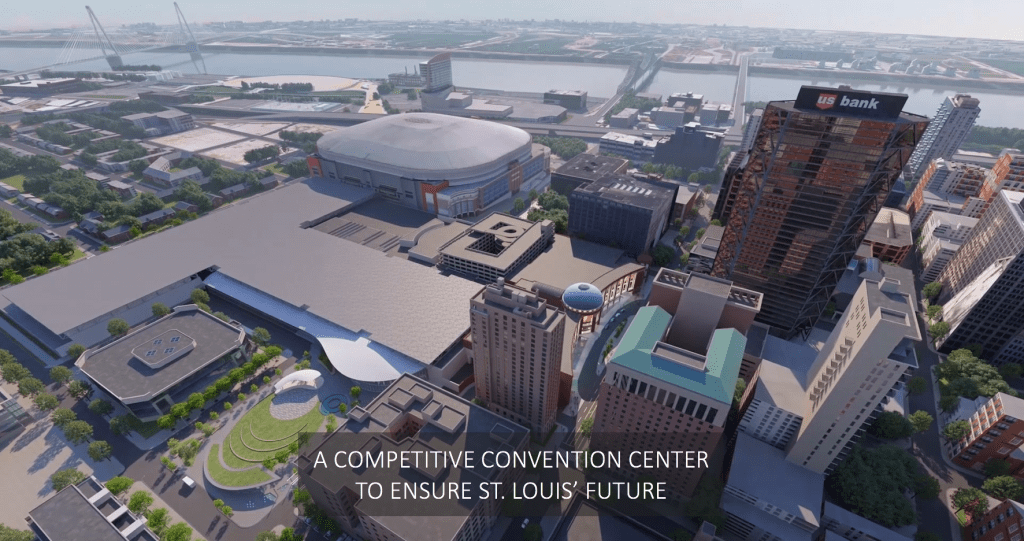 Rendering of the renovated and expanded America's Center.

The St. Louis County Council last month approved funding the $175 million renovation of America’s Center convention center in downtown St. Louis for the next 40 years, to the tune of $240 million.

The county and St. Louis city both currently pay $6 million a year, or $12 million combined, from a 3.75-percent hotel-motel tax to fund the construction of The Dome at America’s Center football stadium.

Those bonds will mostly be paid off in 2021, and the $6 million will be redirected to pay to expand the convention center that surrounds The Dome. Taxpayers will continue to pay $1 million a year on the football bonds through 2023 and $500,000 in 2024.

The council has also previously committed $1.4 million a year through 2028 for a soccer complex in Creve Coeur Park.

Altogether, the $175 million project will cost $400 million in city and county tax dollars combined. The plan adds 180,000 square feet of exhibit space and meeting areas to America’s Center, which was built in 1977 and expanded in the 1990s when the adjoining football stadium was built for a team the city didn’t have yet.

The plans created by the St. Louis tourism bureau, Explore St. Louis, are meant to keep the city more competitive in bids for national and international conventions. St. Louis has been losing out lately to other cities that have invested hundreds of millions of dollars in their convention centers.

Backers of the plan say that it’s necessary to keep St. Louis in the running for major conventions and compete for even larger ones that have outgrown the aging convention center facilities. But critics like 6th District Councilman Ernie Trakas, R-Oakville, say that the expansion is just another in a long line of taxpayer ripoffs perpetrated by St. Louis tourism officials, dating back 30 years to the initial vote to fund The Dome football stadium that the Rams played in until they moved away.

But the plans had to be approved by both the county and the city.

In a party-line vote, council Democrats voted for the convention center expansion and Republicans voted against it. The 4-3 vote capped weeks of contentious debate on whether the county should be funding tourism initiatives in the city at all.

The vigorous debate in the county couldn’t be more different than the vote from the St. Louis Board of Aldermen, which approved its half of the money with little dissent 21-3 in December.

The county vote saw some of the most extreme infighting ever seen at the council, between Trakas and the bill’s primary backer, 1st District Councilwoman Hazel Erby, D-University City, with each accusing the other of bullying.

One of the key disagreements was whether the money from two taxes county residents have approved on hotel and motel stays can be used for general revenue in the county or whether they are tied to tourism purposes. Trakas argued that the money should go to county employee raises or fixing roads. But Erby said she searched for legal language that would allow that and never found it.

Trakas said the idea that the money must be used for tourism is “on thin ice at best.”

When council Chairman Sam Page, D-Creve Coeur, called for a final vote, Erby said she was moving the bill for final passage because “it will give certainty to the future possibility of a healthy hospitality industry,” which employs workers that are roughly half African American.

A second key disagreement was a change to the county bill a week before the final vote that specifically earmarked 35 percent of the funds remaining from the hotel-motel tax after the convention center bonds and other commitments were paid to a recreation/entertainment complex in North County (see article, Pages 1A and 19A).

Erby told The Call after the meeting that she recognizes the need for the convention center because she attends conventions and sees what St. Louis doesn’t have. It’s a rare time she aligned with Stenger.

“Somebody said last week we’re not in favor of it because it’s a beat-up center, you have to go from one place to another place to get to another place,” Erby said. “And I said but that’s what this is for, so we can correct all of that.”

She took a tour a year and a half ago of the convention center with Explore St. Louis Executive Director Kitty Ratcliffe, although the plan for expansion wasn’t unveiled until October.

Among the problems identified by convention officials is that the America’s Center kitchen is far away from the ballroom facilities, which increases the time it takes to get food to an event and limits the food that can be offered. There are not enough loading-dock facilities, and they are inconveniently placed. The facility’s facade leading to the streets of St. Louis is also unattractive.

Those problems will be fixed by the renovation, officials said.

“America’s Center is the front door for St. Louis,” Ratcliffe said, with the majority of convention attendees never having visited the city before.

Trakas asked if he could speak before the vote and angrily said, “Can you smell it? Can ya? Because I can smell it from up here and it stinks. This is an abomination. A quarter of a billion dollars of St. Louis tax money to fund a project? What project? We don’t know anything about what your plans are.”

In the council’s hearing on the bill, Trakas came in near the end. But he confronted Ratcliffe about what the “return on investment” for the building was.

Ratcliffe said that the convention center was never intended to be a moneymaker, but to be a “loss leader” bringing in convention-goers that become customers for private businesses.

“You’ve got a public building that is causing private development,” she said.

Read more about how plans for the convention center dedicates funding to North County here.