Council overrides three Stenger vetoes, can now fund its own outside attorneys 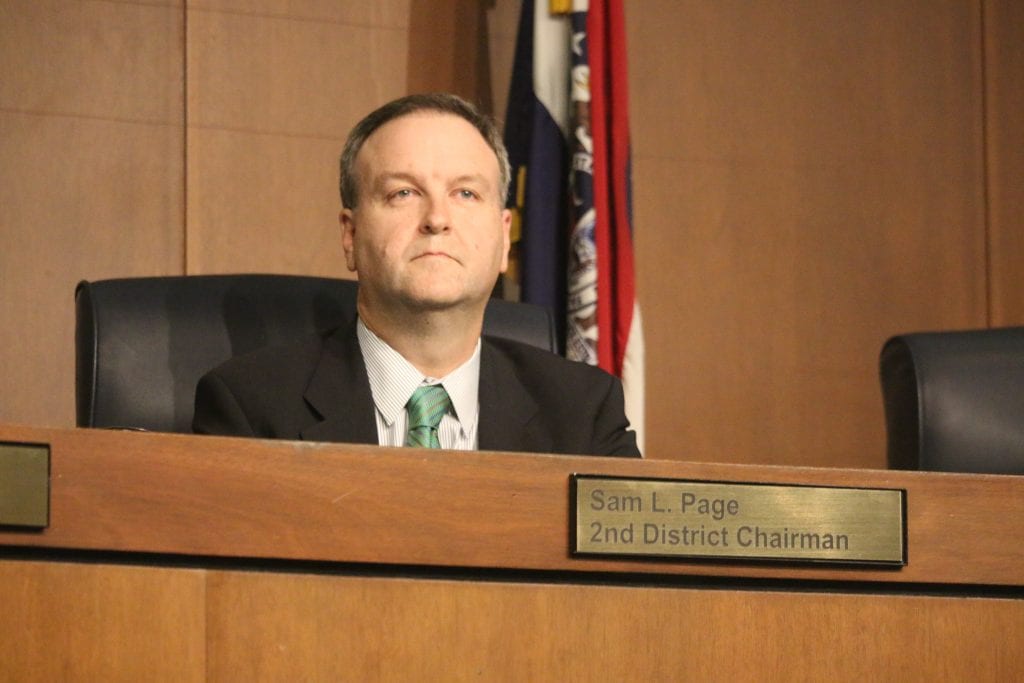 The relationship between County Executive Steve Stenger and the County Council continued to deteriorate last week as the council overrode three of Stenger’s vetoes and 6th District Councilman Ernie Trakas, R-Oakville, promised to launch another investigation of Stenger just before the Democratic primary Tuesday, Aug. 7.

This summer, Stenger has rarely attended council meetings, choosing to appear at blood drives or deliver air conditioners despite the county Charter language that the county executive “shall” attend.

The council welcomed him back by overriding Stenger’s rejection of ordinances the council passed to contract with its own private attorney, fire all the members of the board of the county Port Authority and take more power over who Stenger can appoint to certain boards and commissions.

The only unanimous override was a bill from 3rd District Councilwoman Colleen Wasinger, R-Huntleigh. It grants the council approval power over who is appointed to certain county boards and commissions, requires all boards and commissions to publish their meeting minutes on the county website and “will allow the public much better access,” Wasinger said. “I spent quite a bit of time with the legal department to prepare that bill. I do not believe it violates the Charter in any way, shape or form.”

But Stenger disagreed: “This is just the plain black and white letters of the Charter,” Stenger said. “It’s just basic, plain English, so you can’t argue with it.”

The council asked every board member of the county Port Authority to testify about the organization’s operations at a hearing of Trakas’ Ethics Committee Tuesday — after the Call went to press. It will be the committee’s second investigation after it concluded a monthlong probe into the county lease to create a new North County Government Center at the former Northwest Plaza mall. That investigation ended with Trakas and most of the council calling for state and federal investigations into the deal at the mall, which is owned by Stenger’s largest campaign contributors, brothers Robert and David Glarner.

Funded by money from River City Casino, the Port Authority has been used to buy land for a new Affton Southwest Precinct on Gravois Road and redevelop another shuttered mall, Jamestown Mall in north county. It works closely with the St. Louis Economic Development Partnership and even shares a CEO with that organization, Stenger ally Sheila Sweeney.

“There’s a storm brewing, let’s put it that way,” Trakas said. “A majority of the council believes that it should have more influence, oversight and, frankly, management of the Port Authority.”

A bill that removes all the Port Authority board members who are serving on expired terms — which is every one of them — is either legal or illegal, depending on if you’re asking Page or Stenger.

Page said all board members are now former board members. But Stenger said the action had no effect because it was illegal, and the board will continue to meet as usual.

The council is suing Stenger and placed a Charter amendment on the Aug. 7 ballot to try to hire its own permanent attorney on staff to counter the legal advice they get from County Counselor Peter Krane, a Stenger appointee.

The amendment, one of three, is the subject of a lawsuit from a Kirkwood resident that claims the ballot language on the amendments is illegal and the amendments should be thrown off the ballot. A judge could decide the issue as soon as this week.

The council also wants to use county funds to pay a private attorney representing it in that court case. Stenger vetoed a bill for a contract to hire the council’s preferred private law firm, Bick & Kistner, to represent it in the court battle. The council overrode the veto 6-1, with 5th District Councilman Pat Dolan opposed.

The contract, which has no cap or spending limit, allows the council to use public dollars to pay for Bick & Kistner to represent council members in the Charter lawsuit, in which a judge allowed them to intervene as private citizens.

“As I’ve explained in the past — whether it’s reported or not — I don’t believe the taxpayers should be burdened with paying for outside counsel,” Dolan said.

But the latest council move appears to allow the law firm to start charging the county for its service in the council’s various court battles.

“They want to spend unlimited amounts of money on an attorney,” Stenger said. “They actually are having the audacity to have county taxpayers pay for that. I can tell you two things — the judge isn’t going to allow it, and I will never write a check for that. It’s just not going to happen. It’s just a complete waste of taxpayer money.

“I have never seen a member of St. Louis County government ask taxpayers to pay their lawyer bills for manufactured cases that they’re putting together. It is the — I’ll just say it in common parlance — it’s the craziest thing I’ve ever seen. I’ve never seen anything like it.”

Now seemingly armed with the ability to pay lawyers, Page also noted last week that the council was returning to court in August for its lawsuit against Stenger on separation of powers and Stenger’s cuts to the council budget.

“They’re a very litigious group,” Stenger said. “I’m not going to write checks for needless, wasteful and, frankly, abusive things, and they’re abusing tax dollars by wanting to hire and expend unlimited amounts on unlimited attorneys. And for some reason it’s one law firm. And this same law firm has given Sam Page money, so it’s even more reason to not write a check for this law firm.”

As Page called for Stenger to make the county executive’s report at the July 17 meeting and tell the council about his meeting with the governor last month, Stenger said, “Sam, I’m not going to engage you this evening with political shenanigans, so you can stop now.”

“Is following up on your promise to us a shenanigan?” Page asked.

“In your case, yes,” Stenger said.

Stenger later said that he would not provide a written report to Page at all, and that he gave several media interviews at the time about what was discussed.

“I’m under no obligation to answer Sam Page’s interrogation,” he said.