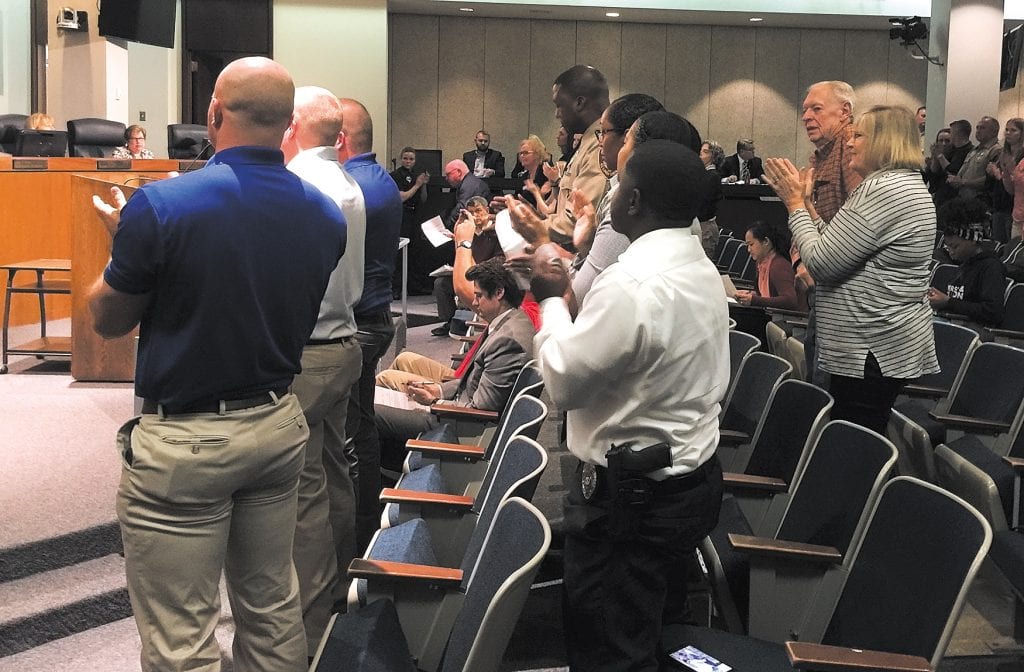 Police officers and the mother of three police officers, right, give a standing ovation to the County Council at the Oct. 17, 2017 meeting after the council unanimously agreed to give preliminary approval to raises for the St. Louis County Police Department approved by voters through Proposition P. Photo by Gloria Lloyd.

Greenlighting raises for county police officers that voters already overwhelmingly approved seemed like a sure thing to sail through the County Council, but instead got mired in the political back-and-forth now synonymous with county government.

The raises are the centerpiece of Proposition P, the half-cent countywide sales tax that went into effect Oct. 1 and could bring in an estimated $80 million annually — $46 million for the county and $34 million for all its cities.

After hours of pleading during days of hearings from police officers and union representatives who believed the council might not grant the raises, council members finally announced publicly at the Oct. 17 council meeting that they never intended to vote against the raises. Final approval could come when the council next meets at 3 p.m. Tuesday, Oct. 31.
The holdup stemmed from a concern about the increased cost to fund pensions after pay hikes averaging 30 percent go into effect Jan. 1, said council Chairman Sam Page, D-Creve Coeur.
Although voters ostensibly approved the raises at the ballot box, under the county Charter every financial decision has to be recommended by County Executive Steve Stenger and approved by the council to go into effect.

Stenger contends he is the biggest proponent of the raises, backed by the union representing officers, the St. Louis County Police Association. Many of the officers asking the council for raises thanked Stenger for his support.

After hours of comments by police officers, their mothers and supporters like Rep. Bob Burns, D-Affton, the council unanimously agreed to grant preliminary approval to the raises. The vote was 6-0, with 6th District Councilman Ernie Trakas, R-Oakville, absent.

In a compromise suggested by Page, a new version of the bill will keep 15 percent of the total $46 million in county Prop P funds in reserve until May in case more money needs to be contributed to police pensions. But that reserve is less than the 20-percent reserve Stenger suggested from the beginning, or $10 million of the total Prop P funds.
Police Chief Jon Belmar also built in a reserve of almost $5 million for benefits on top of the $12 million in extra salary included in his Proposition P spending plan that voters approved. That money will go directly as pension contributions into the county retirement fund, Stenger said.

Stenger plans to stay with his original plan of holding back $10 million of Prop P funds to address any unexpected costs arising from Prop P spending, including extra pension contributions. The other $36 million will go to the Police Department for $17 million in salaries and benefits, two-officer cars, training and two new police precincts.
“I think in an odd way that that may have been a compromise proposal that was made tonight, and it worked,” Stenger said. “And the bottom line is the police will receive their raise, which is desperately needed.”

Although Trakas has allied with the three council members who were most concerned about hastily approving the police raises, Page, 1st District Councilwoman Hazel Erby, D-University City, and 4th District Councilwoman Rochelle Gray, D-Black Jack, he said he would not have supported a delay.
“No. 1, there’s no greater supporter with respect to first responders than me, whether it’s police or fire,” Trakas said. “I was never against the raises, and I fully expect to support it when it comes up for a final vote.”

Letters traded back and forth between Stenger and Page earlier in the week implied that Page planned to hold the raises until the pension situation was resolved.
The week before, he told reporters that he “couldn’t move forward” until he knew more about how the higher salaries would affect the pension.
The same day, he wrote to Stenger that he intended to hold up the raises until he received more answers on how they would affect pensions and hinted that he may direct money from Proposition P toward solving the larger issue of fully funding the county pension fund.

In a letter responding to Page, Stenger wrote, “Prior to your correspondence, I was unable to discern the possible justification for your obstruction. Now that you have made your intentions clear, let me take this opportunity to state in the strongest terms possible that I will use every means at my disposal to stop your plan to divert Proposition P funds from their intended purpose.”

The showdown between the county executive and council chairman continued into the council meeting, when county Officer Matt Crecelius, a union representative with the St. Louis County Police’ Association, accused Page of a “personal vendetta” against Stenger.

“We’re not pawns to play in your political game,” Crecelius said.

The bill to set aside 15 percent of Prop P funds is probably the best the council could do, Page told Earls, who is serving as one of his advisers.
“Otherwise we are just making Stenger look like a hero,” Page wrote.

Page laughed about the texts after the meeting and preferred to focus on the importance of the raises to county officers.

The many county officers who spoke backed the raises. A crime scene detective said that he could make more money managing a McDonald’s than managing the county’s crime scene unit.
But other citizens said the police don’t need more money and should not be rewarded with raises after their actions during recent protests.

Looking at statistics, policing is not as dangerous as trash collection or other jobs that are paid much less, Ferguson resident Nick Kasoff said.

“This isn’t a crisis that needs to be solved by putting all that Prop P money in the hands of police officers,” he said.

However, Elizabeth Snyder, the widow of slain Affton Southwest Precinct Officer Blake Snyder, said that some of the speakers were trivializing the experience of being a police officer.
“They’re not bad, they’re humans and they have lives,” she said. “If you want to make a difference, go be a cop.”

It was in response to Snyder that Erby said she would vote for the raises and added that she had not heard any council member object to the raises during their discussions.