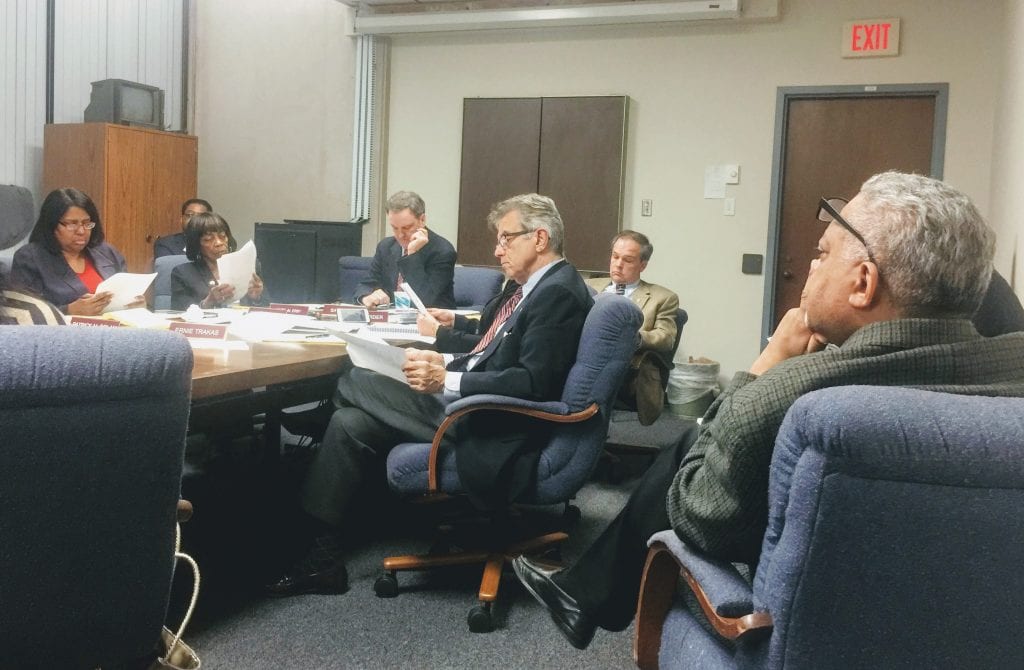 The County Council is considering implementing quotas for minority and women contractors on county construction projects, a move the sponsoring council member believes is necessary to even the playing field among contractors.

What a county minority-contracting program might look like is still up for debate, but a bill sponsored by 1st District Councilwoman Hazel Erby, D-University City, echoes similar policies already in place in the city of St. Louis. St. Louis NAACP President Adolphus Pruitt and MOKAN, a group that advocates for minority contractors, presented it to council members for the first time Feb. 20.

Pruitt and Erby said they hope to fast-track the bill. As other council members questioned the program’s potential cost and logistics, Erby said those details shouldn’t matter as much as getting the program up and running.

“I do know about being fair, I know what it means for us to be fair,” Erby said. “I thought we’d come here today and go through the bill. I didn’t know that we’d have to sell people on being fair in 2018. So I hope the people who I work with, my colleagues, will be fair.”

Erby’s legislation comes on the heels of the first disparity study ever conducted in the county, initiated by County Executive Steve Stenger and issued in December.

Atlanta-based consultant Griffin & Strong reviewed county contracts from Jan. 1, 2012, through Dec. 31, 2015, and concluded there is “substantial evidence to find an inference of discrimination in the county’s purchasing, such that remedial program(s) are legally supportable and warranted, provided that, if they are race- or gender-conscious, they are narrowly tailored to the findings of the study.”

Across the board, the consultant found that all the listed groups of minorities and women, commonly referred to as MWBE, received contracts at rates lower than they should, which the firm attributed as “likely due to race, ethnicity and gender status.”

The lone exception is female firms, which are underutilized as prime contractors but overrepresented among sub-contractors.

Even after controlling for both individual and firm characteristics, a pattern of exclusion remains and would likely persist in the absence of some type of “affirmative measure,” the study noted.

Those outcomes come despite an existing county minority-inclusion ordinance that sets goals for minorities to receive 20 percent of large construction projects, with an additional 5 percent for firms owned by women. The bill was first adopted in 2012 under then-County Executive Charlie Dooley, and became a flashpoint in 2014 during the Dooley-Stenger race for county executive. But the disparity study found those goals have had little impact on who is awarded construction contracts.

No council member voiced opposition to the bill outright, and comments from groups advocating for contractors focused on how a program might function rather than whether the bill should be passed.

“Potentially it’s not only a good idea, it’s probably something that needs to happen,” said 6th District Councilman Ernie Trakas, R-Oakville. “That said, the bill as presented I think leaves something to be desired and has a lot to talk about, so I don’t think we’re close to the end yet … I don’t want to speak for other members of the council, but I think it’s conceptually perceived as a good idea, broadstroke, and the devil’s going to be in the details.”

One of the key questions surrounding a possible program is which minorities would be included. In the first version, the group includes African-Americans, women, Hispanics and Native Americans.

Other groups like Asian-Americans were not included in the draft of the bill reviewed at the first hearing.

The council can also choose whether to institute strict percentages for contracts with the bill’s listed minorities, and whether those percentages should be goals or requirements.

The disparity study suggested a more general goal, said 3rd District Councilwoman Colleen Wasinger, R-Huntleigh. As an attorney, she also wondered what types of disparity measures would hold up in court if challenged.

The study found that African-American contractors’ availability for construction projects in the county is 20.17 percent of the total population of contractors, but those contractors are only receiving 0.11 percent of available prime contracts.

The current total of women and minority-owned businesses used for prime construction contracts is 0.2 percent.

Given that disparity in ability to work versus actual construction awards, Pruitt argued that the county needs to implement strict percentages for certain minorities when awarding contracts, especially when it comes to the county’s highest minority population, African-Americans, which made up nearly a quarter of the county’s population in the 2010 census.

Since the study found that African-American availability for construction jobs is 20.17 percent, the county should set that exact goal for African Americans, Pruitt said. Otherwise, contractors will “play games” by using other minorities, he said.

Any provision that sets out quotas by race is opposed by the Associated General Contractors of Missouri, which represents construction companies. The council set a hearing Tuesday — after the Call went to press — to hear those concerns.

“The curing of past discrimination by ethnicity is inappropriate based on the results of the St. Louis County disparity study,” the AGC wrote in comments to the council, encouraging more general MWBE goals. “Separate goals by ethnicity are exclusive and do not encourage inclusion.”

Trakas said he hopes to steer away from strict percentages that prioritize certain minority groups over others.

“This idea that we’re going to parse out contracts based on representative groups, certain percentages?” Trakas said. “It should just be open to competition.”

Cost is another concern. The disparity study recommends hiring three employees to kick off the administration of any MWBE program, but the bill the council is considering creates a new sub-department in the Department of Purchasing with seven new positions in county government that 7th District Councilman Mark Harder, R-Ballwin, estimated could cost $500,000 annually in salaries and benefits.

One of the reasons the existing inclusion ordinance may have failed so far to increase minority participation is that the county is required by state law to accept the lowest bid for contracts. To create more opportunities to bid, MOKAN suggests a rotation program: After bidders win contracts, they would go to the end of the line and wouldn’t be able to bid on the next project.