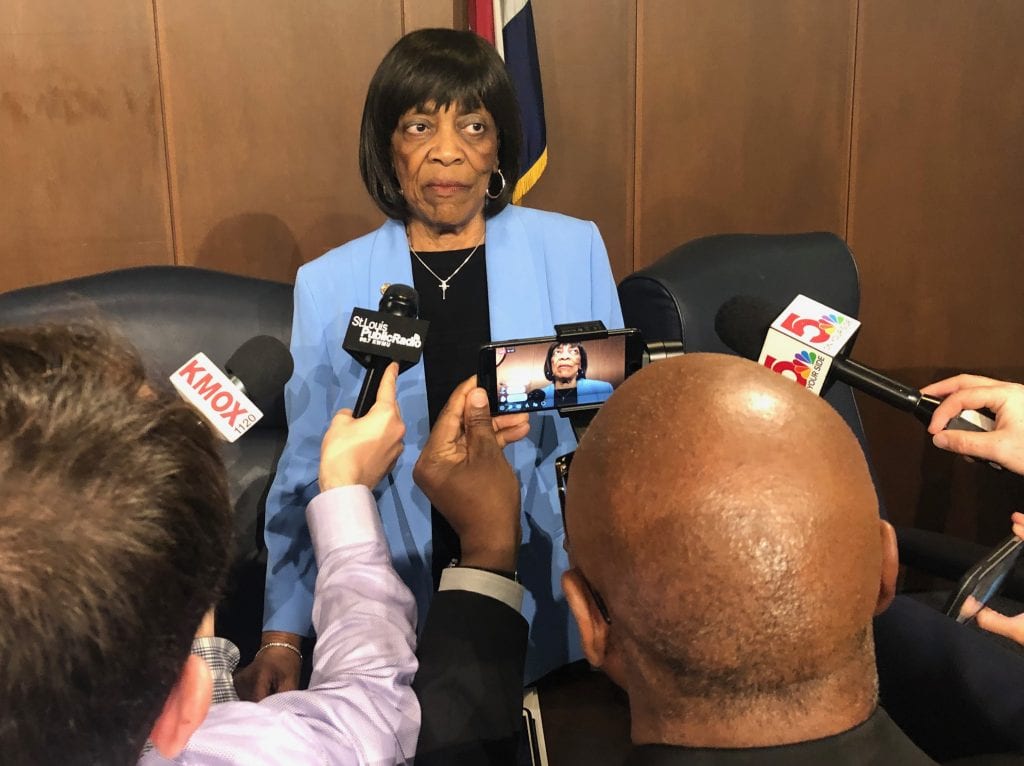 Council members said they had to act quickly so county government could move on from Stenger, and they felt they couldn’t wait even a day until the council’s next regularly scheduled meeting. Typically emergency council meetings don’t have public comments, Page said.

Directly following the vote, a large group of black mayors and elected officials from North County stormed out of the meeting in protest at the decision to not take public comments before the vote. Paul Berry III, the Republican candidate who lost to Stenger in the November election, yelled “See you in court, Page!” as a large group of North County mayors, including James McGee of Vinita Park and Viola Murphy of Cool Valley, walked out.

The vote to name Page as county executive was 5-1-1, with Page abstaining. The one dissenting vote came from 1st District Councilwoman Hazel Erby, D-University City, who was the choice of much of the audience. Erby, the longest-serving council member, criticized the decision not to hold a public forum.

After the meeting, she also criticized the council ignoring tradition of choosing the longest-serving council member, as it had at the last vacancy, when the council chose Charlie Dooley as county executive after Buzz Westfall died in office in 2003.

Then-County Counselor Peter Krane, a Stenger appointee who submitted his resignation at Page’s request the next day, advised the council during the meeting how the county Charter authorizes them to fill the vacancy of the county executive.

Section 3.020 outlines what should be done in case of vacancy, stating that the vacancy “shall be filled by the council” and that the person selected must be a member of the same political party as the previous occupant. In the case of Stenger, a Democrat, that left the options of Page, Erby, 5th District Councilwoman Lisa Clancy of Maplewood and 4th District Councilwoman Rochelle Walton Gray of Black Jack.

Before the vote, Erby questioned Page about why the council was not taking public comments, earning applause from her supporters in the audience. Page replied that there would be public comment at the regular Tuesday night meeting.

“How will we take a vote tonight if we don’t have public input? It seems to me that we’re following the same legacy that we just came from under,” Erby said to cheers from the crowd. “Is everyone in agreement to not allow the public to speak?”

No one on the council replied to that question.

Page said that he was acting on the advice of the county counselor to appoint a council member as interim county executive.

“I object to this meeting. I object to the fact that we’re rushing… It hasn’t been 24 hours yet,” said Erby. “I don’t know what the rush is. I don’t know why we can’t have public comment. Our county has been through a traumatic experience today… I think that our county citizens should be able to weigh in on that.”

Clancy, while agreeing that she was upset by Monday’s events as well, voiced concerns about the county not having an acting county executive, and said that it was a decision that needed to be made quickly since it was impacting residents.

“I will also add that I have been hearing from people for weeks about who they would like to be in this position,” said Clancy, who appeared to be making her remarks to Erby’s supporters in the front rows.

Page opened nominations for county executive. Audible gasps could be heard from the audience when Gray — Erby’s strongest ally on the council for the last two years — nominated Page. No other nominations were made. An initial voice vote was taken, with Erby appearing to be the only council member to vote against Page’s nomination.

Krane recommended that the council conduct a roll call vote instead of a voice vote.

“It’s a shame not to have public comment on something so important for this county,” a member of the audience said before storming out of the council chambers.

“This is a time for somber reflection. The days ahead will be difficult, but there’s an opportunity to right the ship and this opportunity demands bold leadership,” said Trakas. “Sam Page has demonstrated that for the last two years, so my vote is ‘aye.’”

Page told the council and the audience following the vote that he would treat the council with the respect that it deserves.

“I want to assure everyone in St. Louis County from the very beginning that we will have absolutely no tolerance for pay-to-play politics. No tolerance,” said Page. “We will strive to set a new standard for ethical government, and we will be open and transparent so you can hold us accountable.”

Erby would have been the first female county executive. Page has served on the council since a 2014 special election to replace former 2nd District Councilwoman Kathleen “Kelly” Burkett, who died in office. He was first nominated chairman of the council in 2017 and has been elected as chairman every year since.

As county executive, Page will be giving up his lucrative career as an anesthesiologist for a position that pays $140,000 a year.

“I don’t want to be negative. I plan to stay in my seat, work hard, work with Sam. We’ve worked these past couple years together. I just hope we don’t have what we had in the past,” Erby said after the meeting. “This, who was chair tonight, who was county executive, isn’t the important thing. The important thing is we’ve watched a man descend from power because of some terrible mistakes, and that’s always sad.”

The councilwoman also told reporters that she was hoping to become county executive that night because she said her community had asked her to step up to fill the role.

But she implied that she didn’t like the behind-the-scenes decisionmaking about who would be county executive that had gone on even before the indictment was handed down.

“I just hope we don’t have what we’ve had in the past. And that’s what I saw this week. I saw promises and commitments,” Erby said. “You know, you have to be careful about the promises you make.”

Speaking to a group of journalists, she said, “I just ask you all to stay woke and pay attention.”

Page said in his first remarks as county executive, “The best interests of St. Louis County have taken a backseat to the selfish, personal desires of our past county executive.  And so now we will move forward together. We can only change things in our county government if we work together, and that’s exactly what we’ll do.”

The next day, he said that Erby has probably always been his “closest friend” on the council, and he hopes to continue to work with her on the interests of North County.

“It’s difficult to be in a position where we have a different opinion, it’s a rare event,” he said.

Erby also struck a more conciliatory tone with Page at the regular council meeting that night, smiling as she called for the county executive’s report. Like county executives before him, Stenger typically never delivered a report, something the council had complained about in the last year. And in his report, which Page promised he’d deliver every meeting, he thanked Erby for being the first to “sound the alarm” on corruption in St. Louis County and said he looked forward to working with her as county executive.