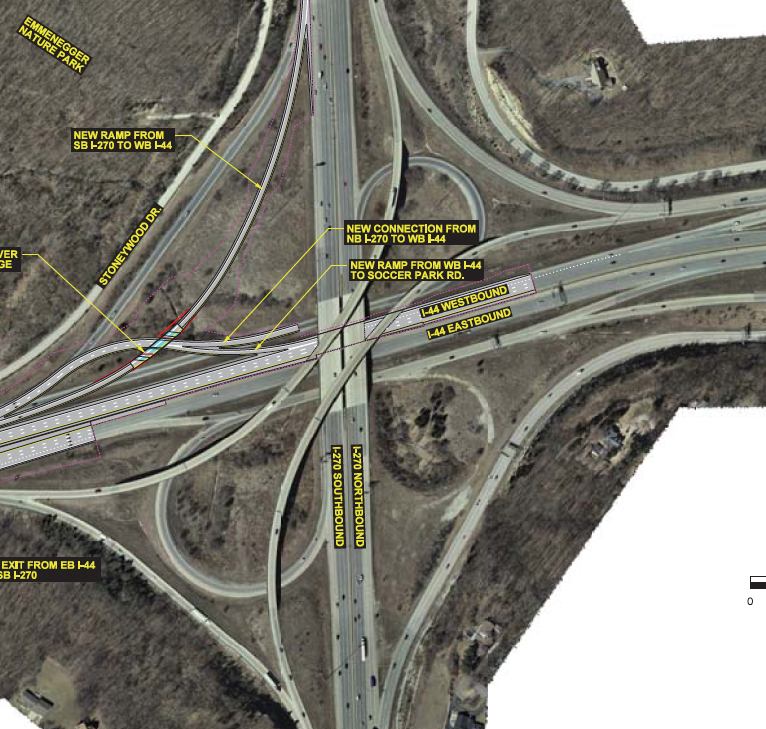 Whether residents like it or not, Interstate 44 is going to be under major construction for four years at the Interstate 270 interchange, starting next year.
The Missouri Department of Transportation, or MoDOT, held an open house on the project last week where engineers and designers outlined what commuters can expect from a project that they say will be worth it in the end.
The roughly $68 million project will replace four bridges — two Interstate 44 bridges across the Meramec River from Sunset Hills to Fenton that will cost a combined $63 million to replace, and two ramp bridges from Watson Road in Sunset Hills to Interstate 44 that will cost a combined $5 million to replace.
Anyone who was unable to attend last week’s open house can attend a virtual open house at TinyUrl.com/I44Bridges2018 where they can see the same exhibits that were displayed at the public meeting, read the documents handed out and give their feedback online.
MoDOT plans to build one bridge at a time starting in the fall of 2018, with each taking two years. That will allow the interstate to remain open throughout most of construction, although drivers should expect one lane to be closed around the clock for much of the project, mostly on I-44 West.
At first, traffic will see little impact as the new westbound bridge is built nearby and traffic continues as normal on current bridges. But once the new westbound bridge opens, construction will start on the eastbound bridge, which is being built in the same spot as the current eastbound bridge. It will be demolished to make room for the old bridge, and eastbound traffic will shift onto the new westbound bridge.
MoDOT will try to minimize the impact to traffic, but the 130,000 people who drive that area of Interstate 44 each day will be slowed down, MoDOT Southwest St. Louis County Area Engineer Karen Yeomans said.
They may be able to avoid the worst of it by leaving 15 minutes earlier or finding another way to work, she added.
All lanes heading in one direction could possibly be closed on some weekends or for more long-term closures as crews rebuild or reconnect ramps to the new bridges.
The ramp from westbound Watson Road to westbound I-44 will be closed for a significant amount of time during construction, but drivers will be able to use Lindbergh Boulevard to detour around the closed ramp.
Replacing all four bridges together should save money when bids come back next year, Yeomans said. The agency plans to bid out the projects in May.
The westbound and eastbound Meramec River bridges will each take roughly two years to replace. The older westbound bridge was built in 1954 and will be replaced first, but the eastbound bridge built in 1972 is also closing in on the typical 50-year life expectancy for bridges. The two Watson Road bridges were built in the 1970s and will each take three months to replace.
All the bridges are still safe to cross today, but are nearing the time when they will no longer be, Yeomans said.
“Our state bridge engineer who’s the one who oversees everything says if he won’t drive his family across it, it’s not open,” she said. “If we don’t feel a bridge is safe, it’s not open. But they’re bad enough that they need to be replaced. At some point, it won’t be, and we don’t want to keep putting money into it when we know it’s reached that point.”
Ultimately, Interstate 44 should be wider, safer and better built to handle congestion, especially for people trying to go to the World Wide Technology Soccer Park in Fenton, officials said.
The project adds wider shoulders and lanes, which expand from the current four to five on the new bridges.
Right now on westbound I-44, soccer traffic shares a lane with traffic from Watson and from both directions on 270. The project will add a dedicated “flyover ramp” or collector-distributor road that keeps soccer park and 270 traffic separated from the interstate with barriers until after the river and also raises it a few feet higher from the flood plain to minimize flooding in those lanes, as has happened in the last few floods.