Coleman is among the record number of women, black and LGBTQ lawmakers serving in Missouri Legislature 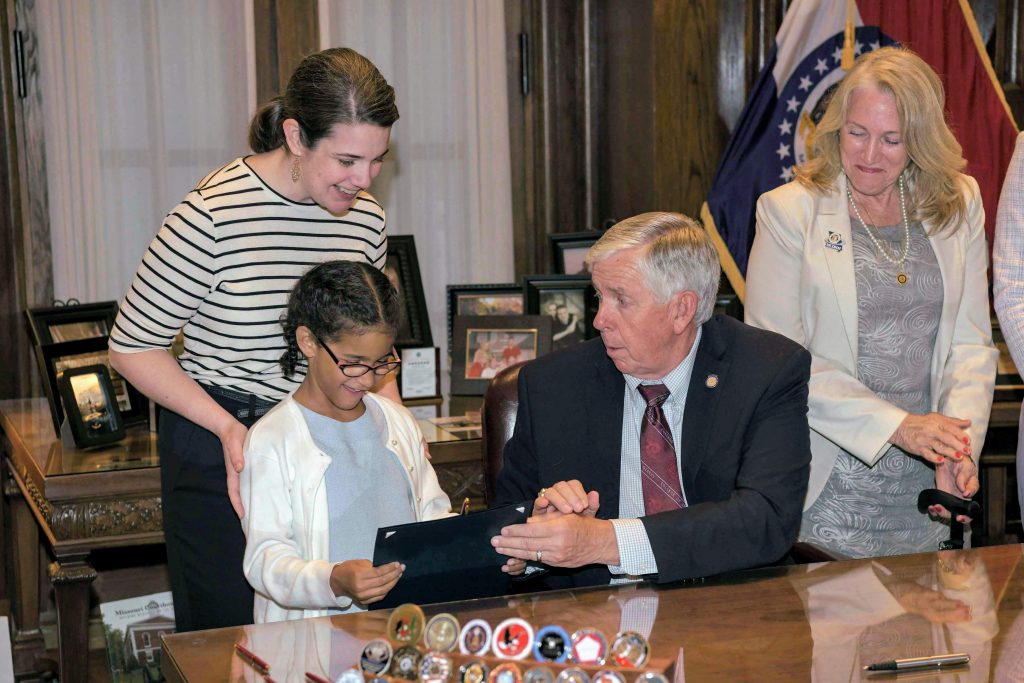 The number of women serving is at an all-time high with 52 female lawmakers. It will have the most ever Black lawmakers serving with 25. There will be five openly LGBTQ lawmakers — which is believed to be another record.

And the first Asian American woman was elected to the Legislature.

It’s a long way from the historic firsts achieved roughly a century ago, when Walthall Moore, a Republican from St. Louis, became Missouri’s first Black state lawmaker in 1920 and two years later in 1922, when Sarah Lucille Turner and Mellcene Smith became the first women elected to the Legislature.

Now in 2021 — for the first time — the Missouri Legislative Black Caucus will be led by an openly gay person, Rep. Ashley Bland Manlove. While Manlove says she’s proud the state Legislature is seeing more diversity in its ranks, it’s “sad” that it’s taken this long, she said.

“Honestly in Missouri, it’s not fun being the first — and normally means you have the most work to do,” said Manlove, a Democrat from Kansas City. “Being the first is normally more of a hindrance in the Missouri House.”

African Americans represent 11 percent of Missouri’s overall population, and Black legislators make up about 13 percent of the 197 state lawmakers.

Despite the state’s gains, Missouri has still often lagged behind the rest of the nation. In 2021, the state ranks 37th nationwide for the number of women serving in the Legislature, according to the Center for American Women and Politics at Rutgers University.

“The Legislature having people from different backgrounds, different races, different genders — all those things make for healthy debate,” said Jean Evans, the former executive director of the Missouri Republican Party and a former state representative.

“Increased gender and racial diversity leads to bills that better reflect the interests of the full population, making government by the people, for the people more of a reality,” Shoaf said.

A rise in women

As a child, Manlove remembers the sacrifices her grandmother, Mary Groves Bland, made serving as a legislator — or as the “guardian of the community” — for 30 years, first in the House and then the Senate. Manlove never imagined that she would one day follow in her grandmother’s footsteps.

But Manlove had what many other women do not have — an example of a female politician in her life.

In just two years, the percent of women who served in state legislatures nationwide increased by nearly 4 percentage points in 2020 to 29 percent, according to the National Conference of State Legislatures. 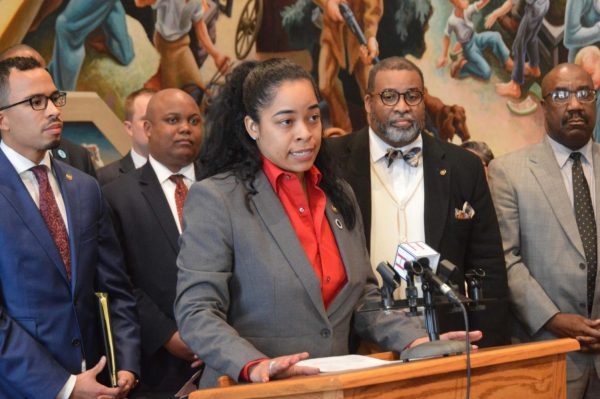 But in Missouri, gains have been more stagnant.

In 2015 and 2016, 49 women served in the state House and Senate, making up roughly 25 percent of the Legislature, according to the Center for American Women and Politics.

It wasn’t until this year that over a quarter of the Legislature was once again women, with 41 in the House and a record 11 in the Senate.

Altogether, 31 Democratic women will be serving in the Legislature this year.

Of the eight Republican women the House lost in 2021, three were elected to the Senate and four were term-limited out.

From March to September, more than 2.6 million women over 20 years old left the workforce compared to about 1.7 million men. While November was the first month during the pandemic that the majority of job losses were felt by men, in December women accounted for more job losses.

It’s unclear if this year’s gains will be stymied in the long run after women have disproportionately left the workforce compared to men amid the pandemic. But Shoaf thinks it could also have an unintended impact and spur more women to get involved.

“It is possible that we may even see an uptick in women running for office as they have been disproportionately impacted by the pandemic and the government’s inadequate response,” Shoaf said, “in the same way that Black Lives Matter and the election of President Trump inspired waves of women and minority candidates.”

For Rep. Mary Elizabeth Coleman, a Republican from Arnold who also represents part of South County, her kids have gotten an up-close view of the political process from the start.

“I campaigned knocking doors with my youngest on my back in a baby carrier,” Coleman said. “And largely because I didn’t want to pay for childcare.”

A mother of six, Coleman’s kids have been with her on the House floor and helped gavel in committee hearings. Coleman said there’s been a large amount of support from leadership who recognize that lawmakers are parents, too.

Studies have shown it’s often harder to convince women to run for office and it takes repeated recruitment.

Coleman wasn’t recruited by a specific mentor to run, but she has words of encouragement of her own for women considering elected office.

Evans said continuing to develop a bench of women candidates has to be a priority.

“Sometime in my lifetime, I would love to see a woman as governor and more women running for statewide office, certainly,” Evans said.

It’s a pipeline that United Women’s Empowerment, or United WE, a nonprofit that works to advance women’s economic growth and civic leadership, is hoping to build with its Appointments Project that aims to increase gender diversity on boards and commissions.

“Part of that initiative is really encouraging women to build their network and their support systems so when they are ready to run for elected office, they have some components of it put into place,” said Wendy Doyle, United WE’s president and CEO.

And part of attracting quality candidates also means ensuring the Capitol has policies that make it supportive of candidates’ with different occupations and a more family-friendly environment, Evans said. She would also like to see stronger action taken on recent allegations of harassment, noting it’s difficult to encourage more women to run if women aren’t stood up for in the building.

It was an experience in the wake of President Donald Trump’s election in 2016 that propelled Rep. Emily Weber, a Democrat from Kansas City, to get more politically involved.

“The day after the 2016 election, I was told at a grocery store to, ‘Go back to where I came from, China doll,’” Weber said.

It wasn’t the first time Weber has experienced racism, and she knows it won’t be the last.

“It was one of those realizations that I really needed to do more than vote,” Weber said. “And I really wanted to make sure that minority voices were heard too, especially in the Asian population.”

Weber’s first experience working on a political campaign was for Sharice Davids’ 2018 run to represent Kansas 3rd Congressional District. Davids’ victory made her one of the first two Native American women to ever serve in Congress, and it was her win that imbued Weber with a realization that she too could serve in elected office.

Born in South Korea, Weber grew up in rural Kansas after being adopted at about 3 months old. She’s lived most of her life in the Midwest, and now she’s the first Asian American woman elected to the Missouri General Assembly.

While complete historical records on Missouri lawmakers’ race and ethnicity are not available, records from the National Asian Pacific American Caucus of State Legislators also have Weber as the first AAPI woman elected to the Legislature.

Hispanics make up 4.4 percent of the state’s population but less than 2 percent of its legislators — which is a similar gap for Asian Americans as well.

“I do think Missouri has a long way to go until voters are truly represented in the statehouse,” said incoming state Rep. Ashley Aune, whose mother is Hispanic and Native American.

Aune, a Democrat from Kansas City, said she has been talking to other Hispanic legislators about creating a multicultural caucus to ensure minority voters are represented in the legislature.

Meanwhile, the Missouri Legislative Black Caucus is now the largest it’s been since the organization’s inception in 1989. It now has 24 members — 19 Black state representatives and five senators. Rep. Shamed Dogan from Ballwin is still the only Republican member.

Rep. Raychel Proudie is currently the only Black legislator not part of the Caucus.

The five Black senators sworn in last week are the most to ever serve in that chamber simultaneously.

“We now have the most Black representation in the Senate in our state’s history,” Roberts said.

“There hadn’t been a Black man in the Senate for 20 years before Brian Wiliams, and they are both from the same fraternity,” he said, referring to Kappa Alpha Psi Fraternity Inc.

Sen. Brian Williams, a Democrat from University City, was elected in 2018. He’s joined this year by Roberts, 32, who will be the youngest Black state senator in Missouri history — a title last held by Raymond Howard, who was 34 when he took office in 1969.

With Rep. Chris Sander’s election to the House, there will now be five openly LGBTQ members across the House and Senate, including two Republicans.

In addition to priorities like education issues and a balanced budget, Sander, a Republican from Lone Jack, hopes to see protections for LGBTQ Missourians make progress this session. In 2003 as a member of the University of Missouri’s student government, he helped with the effort to get the entire University of Missouri System to add sexual orientation to its nondiscrimination policy.

“Fifteen years ago I was helping LGBT people in the University of Missouri System not be discriminated (against),” Sander said, “so I hope to do the same thing in the state of Missouri for everybody.”