Cliff Cave trail will be enjoyed for many years to come, officials say 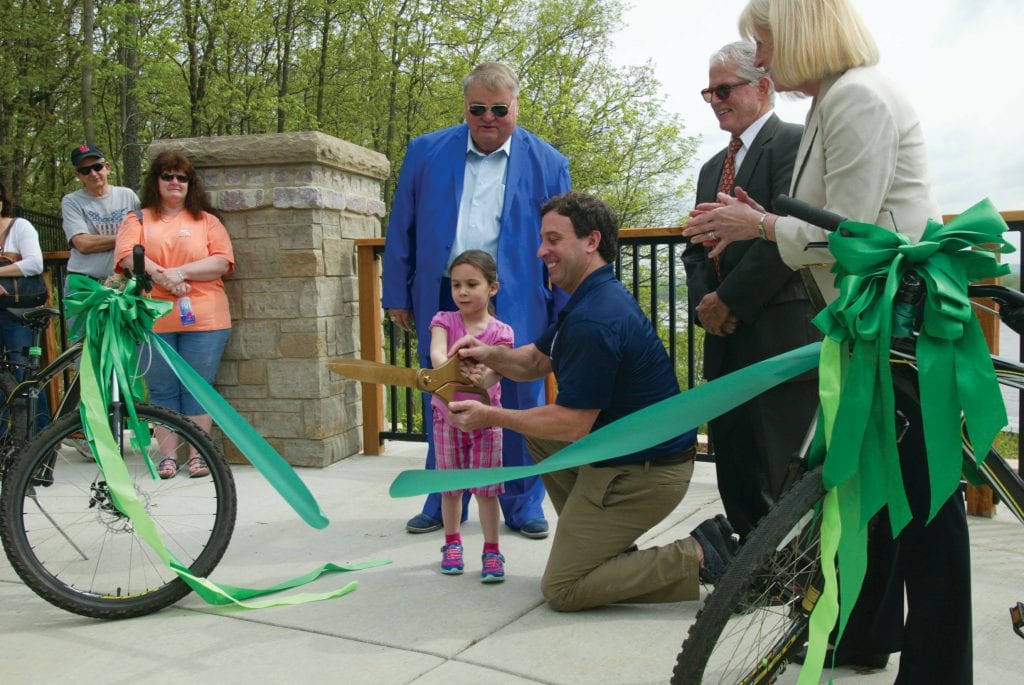 To see more photos of the trail, click here.

With the existing five miles of trails, the park now has seven miles of walking paths.

Notably absent from all the festivities was 6th District Councilman Ernie Trakas, R-Oakville, who was invited by GRG.

He blocked the trail’s construction last year and pushed for a pedestrian bridge over Telegraph Road to the new trail entrance. The trail was built despite a lawsuit filed by neighbors.

In Stenger’s remarks at the ribbon-cutting ceremony, he emphasized the importance of working together as a team.

“It was challenging in the beginning,” Stenger said. “But when you look at the breadth and the scope of this project and you just look at this tremendous view, it’s easy to see how we were able to move this forward and be here today.”

Trautman later added, “It was hard – it was hard.”

The project added bathrooms and a new parking lot at Cliff Cave Road and New England Town, in addition to the existing lot at the end of Cliff Cave Road, plus a pedestrian-only entrance at Telegraph Road.

The trail to Telegraph is about 1 mile, and the distance from the overlook to the cave is about 0.4 mile.

The Telegraph entrance will allow neighbors to access the trail without having to drive to the main park entrance on Cliff Cave Road.

GRG downsized the Telegraph entrance from its original plans so that people would not mistake the new entrance for the trailhead and drive there expecting to find a place to park. The entrance will not have any parking.

Considering the scope of directly linking Telegraph Road with a trail to bike or walk along the Mississippi River and the fact that the money for the trail came from Great Rivers Greenway instead of the county, Stenger said, “Aren’t we fortunate?… We hope you enjoy it for many years to come.”

The regional trail system being built by GRG will “rival any in the country,” the county executive added.

The existing unpaved trails at Cliff Cave and mountain-biking network are still there for those who want to use them, but more people will be able to enjoy the park than in the past, Trautman said.

“Any time we lay a trail, people are on it. They just enjoy,” she said. “You wouldn’t have been able to be here (next to the cave) unless you were a mountain biker.”

The new paths also open up the park to people with mobility issues, bicycles and children in strollers.

“The new trails will allow access to everybody – you notice the grade coming down here,” county Parks Director Gary Bess said.

“I’m kind of a fat guy. I can walk up and down this, it’s OK. But it also allows our friends that don’t have the mobility that we do, in wheelchairs or walkers, for example, to come down here and enjoy this beautiful view.”

The trail was built by an Oakville-based contractor, Ideal Landscape, owned by Oakville resident Dave Buckel.

Trautman brought him up as she spoke at the ribbon-cutting. Stenger hugged him.

“I don’t usually do this, but is Dave Buckel in the crowd?” Trautman said. “We don’t usually call the contractors out, but here is a man who had challenges here in every way. So I just want to thank you personally. From the geology to the politics to the massive effort it took to build a project like this, it’s stunningly beautiful, and Ideal Landscape did an amazing job.”

Contractors ran into issues building the many steep retaining walls required for the switchbacks to keep the grade up the bluffs at 2 percent, Trautman said.

The ground in the park was more challenging than a typical project because it is karst and riddled with sinkholes.

At one of the early public meetings on the project held at Oakville High School in 2016, a planner said that visitors to the overlook on the bluffs would be able to see Kentucky on a clear day.

Trautman said she’s not so sure, but what visitors can see is beautiful.

“I don’t know about Kentucky, but you can see a lot of Illinois,” she said.

Trakas pushed for a safety study to look at whether the project needed a pedestrian bridge over Telegraph Road to keep bikers and walkers out of the way of traffic at the intersection of Telegraph and Erb roads below.

The safety study found that the crossing would be safe, and the original plan was built without a bridge.

But with an influx of parents with strollers trying to cross at Telegraph, some residents have questioned the study’s findings.

“I understand and appreciate people’s concerns, but we’ve done a lot of work in these areas and if you look at Grant’s Trail, for instance, it has a dozen crossings over roads bigger than or equal to Telegraph,” Trautman said. “If we thought it was an unsafe crossing, we would have done it differently.”

The Telegraph entrance has no sidewalk linking with other sidewalks in the area because it is surrounded on both sides by private property, Trautman said.

Most people who enter the park will be crossing from Erb Road.

“What this really does is allow the neighborhoods on the other side to connect into the park and not have to get in a car to drive there,” she said.

Editor’s note: In a future issue, the Call will look back at the neighbors’ lawsuit.