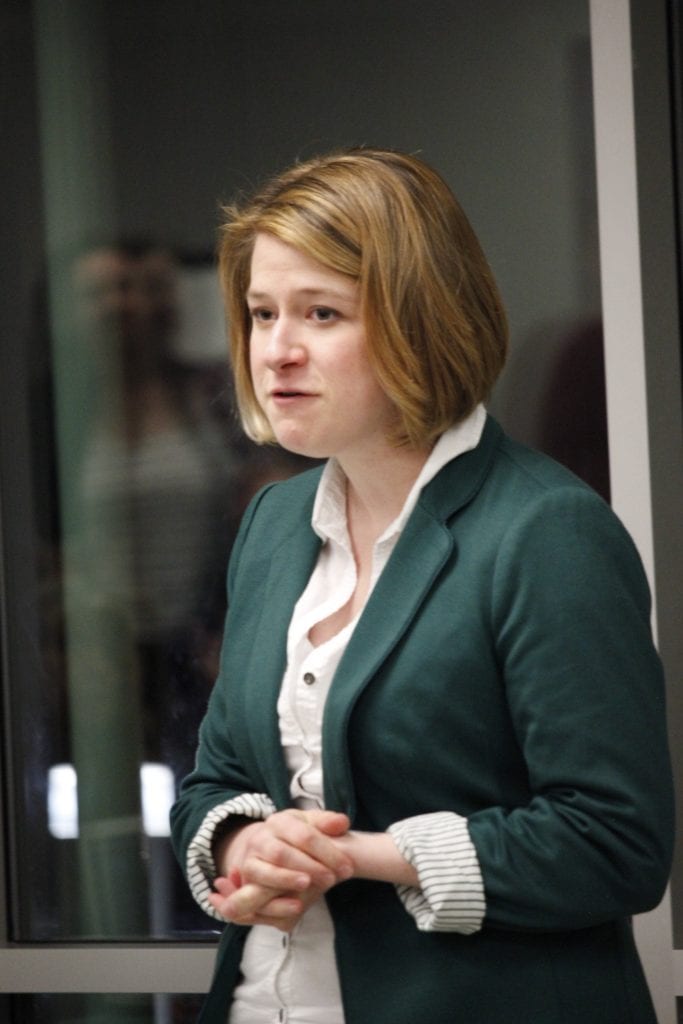 Fifth District Councilwoman Lisa Clancy speaks at her town hall over the fate of Tower Tee at the Affton Community Center March 20, 2019. Photo by Erin Achenbach.

St. Louis County Councilwoman Lisa Clancy, D-Maplewood, said she will drop a proposal to ask voters to approve a half-cent sales tax for early-childhood education from the agenda at Tuesday’s County Council meeting, after pushback about the timing and behind-the-scenes crafting of the bill.

Clancy introduced legislation for the tax at the Aug. 11 meeting — just a week after the Aug. 4 Democratic primary, in which Dunaway and County Executive Sam Page both won their races — but held it at the Aug. 18 meeting after Days said she could no longer co-sponsor the new sales tax after learning more about it. The fourth Democrat on the council, the 4th District’s Rochelle Walton Gray, D-Black Jack, lost her seat to challenger Shalonda Webb in the primary and will serve until Dec. 31.

The deadline to place a measure on the Nov. 3 ballot is Aug. 25, or possibly another week or so beyond that if the county was willing to go to court to request that the tax be placed on the ballot.

The half-cent sales tax would have raised roughly $85 million a year — double the annual haul of last sales-tax hike county voters approved, the quarter-cent sales tax Proposition P approved in April 2017. That took in roughly $46 million before this year’s COVID-19 economic downturn. The county also has a quarter-cent sales tax for the Children’s Service Fund, which pays for children’s services in 10 specific behavioral areas.

“The revenue generated by this tax will be used to promote and implement high quality early childhood education as a long-term economic development strategy,” Clancy wrote in her request to Associate County Counselor Genevieve Frank that the legislation be drafted, noting that she is a social worker and a former elementary teacher. She also made the connection between “quality child care, labor productivity, and the economy, especially during our current global pandemic,” calling the connection between early-childhood education and economic outcomes “compelling.” Approving the tax would make St. Louis County a “national leader” and “innovator in supporting the needs of working families and our economy in the face of a continued pandemic and beyond.” She also included data from an early-childhood group that said touted the tax’s potential payback in hours worked by parents, higher property values and lower crime and incarceration rates as children become adults.

Those statistics were also included in the since-dropped legislation itself, along with language not in the proposed ordinance from the Ready by 5 coalition that the funds could be used outside of St. Louis County if a volunteer oversight board agrees. Additional language in the county bill said that 20 percent of the tax had to be used for an economic development purpose, including, but not limited to, acquisition of land; infrastructure for industrial or business parks; improvement of water and wastewater treatment capacity; extension of streets; public facilities directly related to economic development and job creation; and providing matching dollars for state or federal grants relating to such long-term projects. The remaining revenue could be used for marketing or job training, according to the language of the ordinance.

The Ready by Five group, which raised $160,000 in a single day in July for the effort, said in a statement Monday that the changes in the St. Louis County bill “veered from our original intent.”

In explanation, the group said, “Our community members have waited for too long for change; however, the urgency we felt to deliver them the opportunity to vote for this change in a historic election, intensified by the effects of a public health disaster, led us to lean too heavily into relying on existing political relationships and hasty decision making. We are grateful to our critics, particularly the Black leaders who spotlighted insecurities in the new bill.”

Ready by Five Executive Director Gloria Nolan said she visited Days at her home with “masks tight and hearts open.”

The three council members said in their statement Monday that they would continue to work on the issue of early childhood education.

“We acknowledge the need for continued exploration of revenue options, as well as the need to build a broader consensus among community stakeholders about the pathway forward,” the three councilwoman said in the statement. “How best to provide and ensure quality early childhood education, especially for our most vulnerable children, is one of the most important policy discussions that our region and state can have.”

The council members went on to say, “Moving forward, we are eager to continue to collaborate with community members on this issue and with other elected officials across the region and state. This is a common-sense economic development issue, as well as a moral one, for all of Missouri. The well-being of children and families will always be a priority for us.”

“This is an economic development issue, and a moral one,” Clancy and Dunaway wrote. “While we will continue to work on this issue locally, families and childcare providers across our state desperately need your leadership in Jefferson City.”