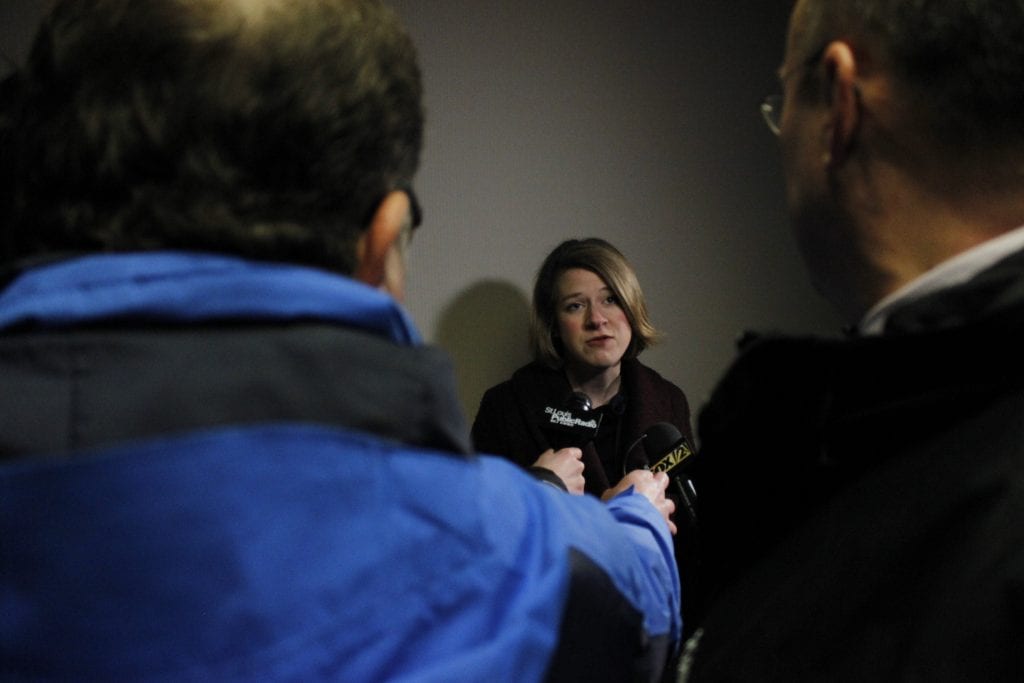 5th District Councilwoman Lisa Clancy takes questions from reporters after being sworn into office on Tuesday, Jan. 1, 2019. Clancy, a political newcomer, beat two-term incumbent Pat Dolan in the August 2018 Democratic primaries before going on to win the council seat in November. Photo by Erin Achenbach.

A bid by a County Council member to ban landlords from being able to reject renting to tenants who receive federal housing subsidies like Section 8 has been abandoned for now, in the wake of opposition by several South County residents who spoke at the council.

Fifth District Councilwoman Lisa Clancy, D-Maplewood, introduced “source of income” affordable housing legislation in May, which was one of the proposals out of the county’s Affordable Housing Task Force that issued a report around the same time.

But she dropped the legislation last week — for now — after a series of residents spoke out against it over the summer. When she first introduced it, affordable housing advocates said the new law was sorely needed.

Under the proposal, landlords would be banned from not renting to a prospective tenant solely based on the fact that the tenant has a Section 8 housing voucher or other subsidies. Vouchers would be treated like any other source of income when deciding whether a renter qualifies to rent a home or apartment.

The source-of-income ordinance seemed like it might be one of the first initiatives the newly restored Democratic majority could take up.

But without any council discussion, Clancy dropped the legislation instead.

She told The Call the move was a “good compromise” she came to after many discussions with council Presiding Officer Ernie Trakas, R-Oakville. They will look at ways to create an affordable housing trust fund, as the task force recommended.

Clancy, who joined the council Jan. 1, said many people had misconceptions about the law.

“They can’t say no Section 8,” she said, but that doesn’t mean that landlords would have to say yes, either.

They could still reject an applicant after a background check or because they preferred another candidate. But they could no longer reject a tenant solely because they have Section 8 vouchers. The legislation would also protect Social Security, veterans’ pensions and other such legal income from discrimination by landlords.

“I heard a lot of ‘this forces, this mandates’ — it doesn’t force or mandate anyone… It merely means that they are not going to be turned away from having a fair opportunity to apply for renting that property,” Clancy said.

A series of South County residents appeared at the council over the last few months, urging Clancy to drop the legislation and saying it’s unfair that she pursued a bill that only affects unincorporated St. Louis County when she lives in a city.

But she said several cities in her district like Clayton and Webster Groves are pursuing the legislation, and she thought the county should “lead the way.”

Real-estate broker Dennis Daniels of Lemay, who said he was a residential home leasing specialist but doesn’t own any rental property himself, said he wanted to speak about the bill that “would force housing vouchers onto all landlords living in unincorporated St. Louis County… I believe to mandate the proposed voucher system… is not only not wanted, it’s not needed, and if it occurs, it’s gonna have direct, as well as indirect, negative consequences over all of the community. In short, the proposed bill is simply folly….

“Government legislation and involvement often can become excessive and this is an unfair burden on landlords and property owners in a targeted area, which is just pretty much unincorporated St. Louis County. The proposed legislation would mandate that everyone in this particular area accept housing vouchers, no matter where income is derived from, even if that income is derived from laundered cash money, drug deals and the like… What is the driving force for this discriminatory legislation? It excludes upwards of 85-plus other municipalities in St. Louis County and just targets the unincorporated portion. The targeting of unincorporated St. Louis County with this proposed legislation is a violation of our freedoms and also unconstitutional. So please do what is necessary to prevent this from happening.”

Concord resident John Struckhoff, the husband of Concord Republican Committeewoman Chris Struckhoff, pointed out that the bill would not affect municipalities. But he felt it would change things in unincorporated South County.

“This bill is targeting South St. Louis County — 95 percent of District 6 in South County is unincorporated,” Struckhoff said. “Bill 102 would affect the makeup of our neighborhoods… Bill 102 is overreaching and undemocratic. It takes away our property rights.”

Behind the scenes, the legislation faced opposition from Trakas, who is serving as the council’s acting chair.

If Gray had been on board, Clancy could have perfected the legislation with the new Democratic majority cemented last week.

Trakas said he opposes the source-of income law as both an “equity issue and a liberty issue.” First, he objects to imposing new housing regulations on unincorporated areas of the county that don’t have to be followed by cities.

“There’s an inherent inequity and unfairness about that,” Trakas said. “If we’re going to go down this road, it should be countywide.”

He also noted that the ordinance would go above and beyond state and federal anti-discrimination protections in what it requires landlords to do. As an attorney, he has specialized in representing school districts in federal discrimination cases.

Federal housing legislation “doesn’t require any property owner to accept any kind of voucher, it allows you to opt into a program that if you qualify, then you can accept them, but it’s the property owner’s right to choose to do so — so the bill as proposed would fly in the face of that very concept,” Trakas said. “ And then it begs the question if I accept vouchers … do I violate the Fair Housing Act because I’m not a qualified property owner under Section 8? There’s a whole host of very intricate legal issues as well as the equity and liberty issues.”