Region turns out in honor of 'a great man,' Stenger says 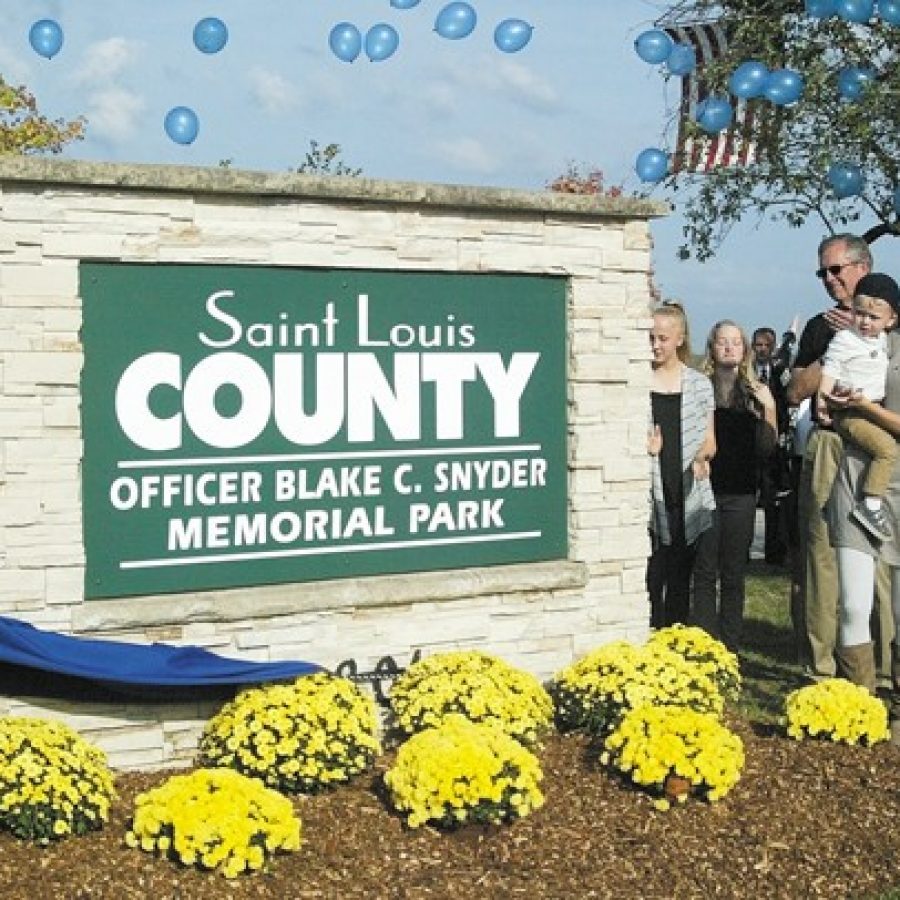 Elizabeth Snyder and her son Malachi, right, are pictured last week after the unveiling of the sign for Officer Blake C. Snyder Memorial Park. Hundreds of county officers and dignitaries attended the Nov. 2 ceremony in Green Park.

When Affton residents Kathy Bosch and Dawn Oppy started an online petition to rename Clydesdale Park after fallen Officer Blake Snyder, they figured he might have sometimes patrolled the park.

But they had no idea that it was one of his favorite places.

The St. Louis County Affton Southwest Precinct officer, 33, was shot and killed a street over from the 117-acre park while responding to a disturbance call in Green Park Oct. 6. An 18-year-old from Affton is charged with first-degree murder in what might have been an ambush.

Snyder took his wife, Elizabeth, and their son Malachi, 2, to parks all over the region, but Clydesdale Park was always their favorite, she said after speaking last week at the official dedication ceremony for Officer Blake C. Snyder Memorial Park. The couple lived in Edwardsville, Ill.

“The first time Blake took me here, it was just us,” she said. “And I’ll always remember that, because he would always take me to different parks and this one just stood out. We really liked this one the best, so this is crazy.”

After Bosch and Oppy gained thousands of signatures on their petition to rename the park for Snyder, County Executive Steve Stenger signed an executive order Oct. 18 immediately renaming it, and the signs were switched out in record time two days later.

But hundreds of county officers and dignitaries gathered Nov. 2 to make it official and once again honor a man whom many county residents have come to regard as a hero.

Stenger stepped in to help Elizabeth, holding Malachi, as she struggled one-handed with a rope to officially unveil the new sign. As the blue fabric fell after a few tugs from Stenger, students from nearby Margaret Buerkle Middle School in the Mehlville School District released blue balloons to the sky.

As Elizabeth and the crowd clapped, Malachi joined in. He soon traded his baseball cap for a firefighter’s hat and went off to explore the Affton Fire Protection District ladder truck, which flew a flag high over the park for the ceremony, as his mother spoke to reporters.

“Thank you so much,” Elizabeth said to Stenger.

Standing in front of the sign with her husband’s name, Elizabeth recounted how she woke up nervous that she would not be able to convey her immense gratitude for the monetary assistance to BackStoppers and other support that the entire region, most of them strangers to her before Oct. 6, have extended to her in the wake of her husband’s death.

Her nails sported blue polish, the color of law enforcement, matching the bows and porch lights that have sprung up throughout Green Park and the region since her husband’s death.

“I feel like my family has grown by thousands, and I’m overwhelmed,” she said. “Thank you from the bottom of my heart — I love you all.”

Malachi, or “Chi” as he is nicknamed, doesn’t understand what happened to his father yet, she said. Some days are better than others for each of them.

While on an errand a few days before the ceremony, the difficulty of explaining death to a 2-year-old hit home.

“He just said ‘Daddy’ the entire time, and it was really hard because I’m not quite sure how to explain where he is right now,” she said. “But eventually I think he’ll understand, and he will definitely understand because of the community support and what they’ve done for him.”

She plans to bring her son to his father’s park so often that they’ll have to be considered local residents, she said. On the family’s previous trips to Clydesdale Park, the trails were Malachi’s favorite thing to explore because “he likes to run around,” she said.

Like the park, those trails are now known as the Blake C. Snyder Memorial Trails.

As for what her husband would have thought of the honor, she laughed thinking about how he would have turned “five shades of red.” He was so humble, but he would have loved it, she said.

“I love that there’s a place to forever remember him, and that the community has been amazing in making that happen,” she said. “I just am so happy that I have such a big family now.”

The appreciation residents have displayed for law enforcement in the month since Snyder was killed is unlike anything police Chief Jon Belmar has ever seen, he said in his remarks to the crowd.

“In 30 years of law enforcement and far too many funerals, I have never seen anything like what we saw two weeks ago,” Belmar said. “That is a testament to the commitment of this community, and thank you for that.”

The county executive commended the residents who signed the petition, and residents from throughout the nation who have shown support for St. Louis County and its officers.

“I think it was a great day for St. Louis County and really our whole region,” Stenger told the Call. “We came together today to honor a great man.”