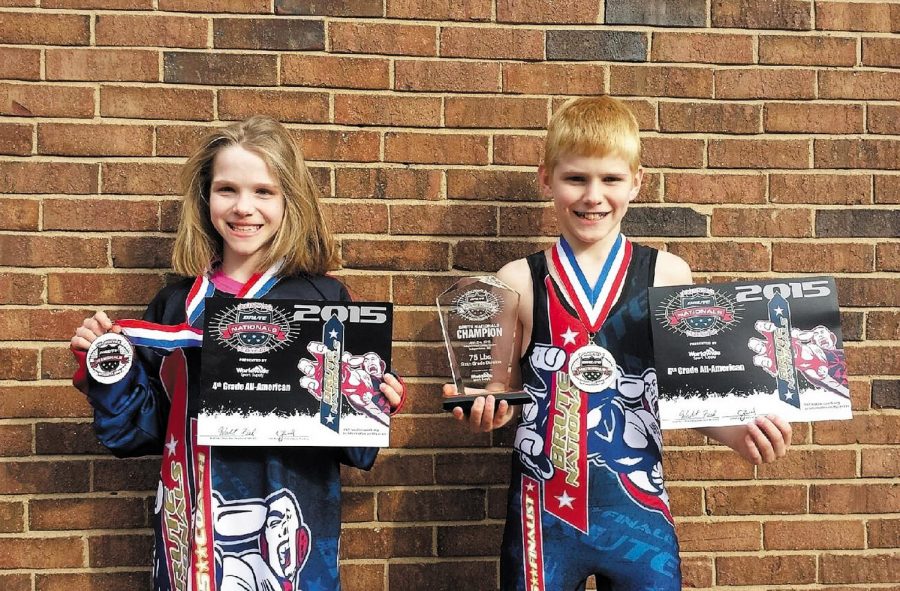 Kaylin Homfeld and her brother JP display the awards they won earlier this month at the Brute Nationals Wrestling Championship. In February, the two won state wrestling championships on the same day.

JP Homfeld, a sixth-grader at Bernard Middle School, and his sister Kaylin, a fourth-grader at Oakville Elementary School, each won a state title in late February. JP, 12, who wrestles for Rockwood Lindbergh Youth Wrestling, defeated four opponents to earn first place in his 32-man bracket and become the AAU State Champ in Novice 75 pounds.

Kaylin, 10, who also wrestles for Rockwood Lindbergh Youth Wrestling, had her sights set on something bigger.

She is a member of G-Force Elite, the first all-female wrestling club in Missouri.

Kaylin and 10 teammates participated in the Missouri USA Girls State in Mexico.

This was the inaugural year for this all-female wrestling tournament with roughly 100 participants.

Kaylin won all her matches in a four-girl round robin to become the Missouri USA Girls State Champ in 10U 55 pounds, her first gold medal.

Of the 11 G-Force participants, the team earned five golds, three silvers, and two bronzes. G-Force Elite is a free club based in Festus, and is open to any girl up to 12th grade.

Earlier in February, JP and Kaylin both brought home silver medals at the USA Missouri Nationals in Lebanon.

In April, JP won the championship at the Brute Nationals Wrestling Championship, while Kaylin finished third.