Boy Scouts throughout south county collect for Scouting for Food 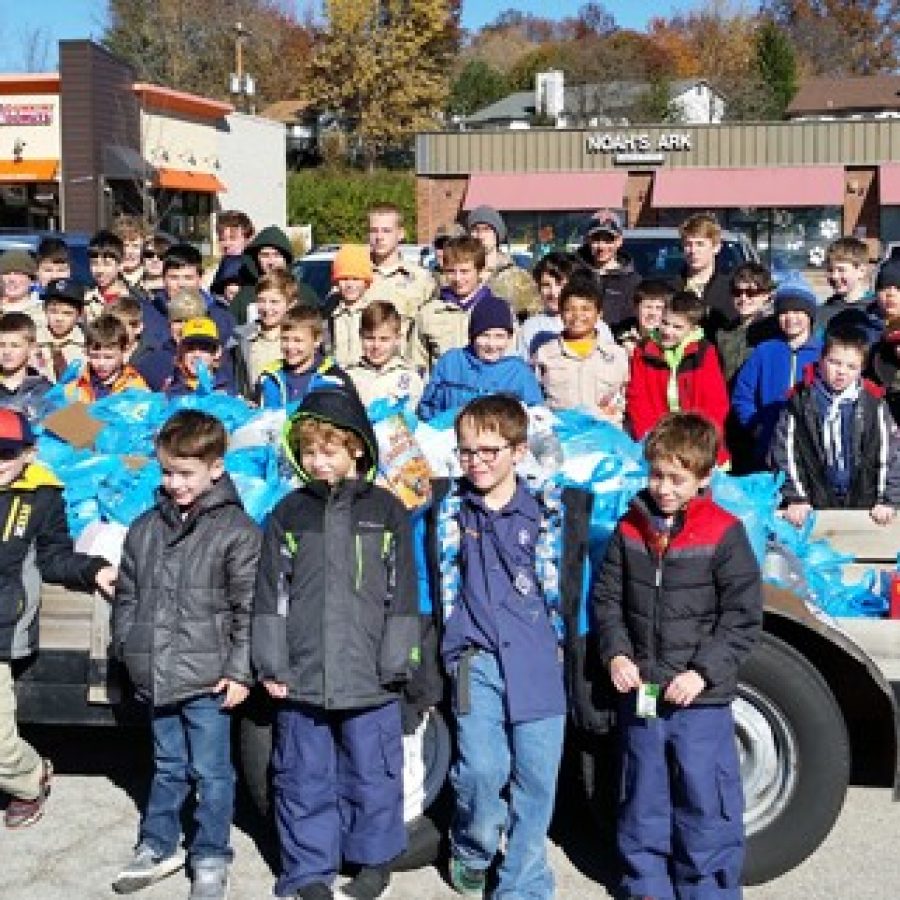 Boy Scout Troop 752 and Cub Scout Pack 267 of Beasley Elementary gather in Oakville Saturday with the food items they collected from their neighborhood.

Among the participants in the annual Scouting for Food tradition were Boy Scout Troop 752 and Cub Scout Pack 267 out of Beasley Elementary.

After meeting at the Dairy Queen in Oakville, the boys went door to door and collected donated food from their neighborhood.

The Greater St. Louis Area Council estimates that over 2.2 million items were donated, with more to be collected over the holiday week. That equates to 582,500 meals. The total is the third-highest collection ever recorded and the highest total since 2008, the Greater St. Louis Council posted on its Facebook page.

Besides the visits to houses, Troop 585 of the Gravois Trail District Boy Scouts annually organizes a food drive to collect cans from area senior-living facilities. Residents of the facilities donated 1,800 items of food this year.

The Greater St. Louis Area Council, Boy Scouts of America announced before the 32nd annual event that MERS Missouri Goodwill Industries would serve as the 2016 Scouting For Food sponsor.

Due to the windy weather on Saturday, not every troop was able to get back to every house where they had dropped off bags. If your bag went uncollected, you can drop it off through Nov. 26 at any Goodwill store.

Scouting For Food is the Boy Scouts’ annual service project. Thousands of Scouts deliver approximately one million bags to area neighborhoods each November and return one week later to collect the bags filled with food donations. Each year, Scouting For Food collects about two million food items. Nationally, it is the largest one-day food drive in the Boy Scouts of America.

From its inception in 1985, Scouting For Food has grown to become the St. Louis region’s largest single-day food drive. The Greater St. Louis Area Council has collected more than 50 million food items in the 31-year history of the campaign. To learn more, visit sff.stlbsa.org.

Goodwill’s mission is changing lives through the power of work. Veterans, single parents, people trying to re-enter the workforce after an injury, and people who have been unemployed receive help from various programs that Goodwill creates or partners with, such as Scouting For Food.

“Partnering with MERS Missouri Goodwill during our annual food drive will undoubtedly allow us to help even more families in need,” Ron Green, Scout executive/CEO of the Greater St. Louis Area Council, stated. “With their help, we can amplify awareness around Scouting For Food thus increasing the amount of canned goods donated. The Greater St. Louis Area Council is grateful for the support of Goodwill and the generosity our community has continued to show during this annual food drive.”

“We are honored to sponsor the Scouting for Food initiative and support the thousands of Scouts from the Greater St. Louis Area Council in their push for food donations,” stated David Kutchback, president and CEO of MERS Goodwill. “The annual food drive shows the impact of bringing communities together for a cause and reflects MERS Goodwill’s commitment to supporting Individuals in their path to employment and independent living.”

The food drive takes place as the winter months approach and when many families are forced to cut their food budget in order to keep their heat on, increasing the demand on local food banks and pantries.

With the help of Sunset Transportation, canned good donations in the St. Louis area are delivered to the St. Louis Area Foodbank for further distribution through a network of more than 500 partner agencies. In southeast Missouri and Southern Illinois, Scouts take donations directly to local food pantries. Scouting For Food is responsible for supplying more than 500,000 meals each year to families in need.