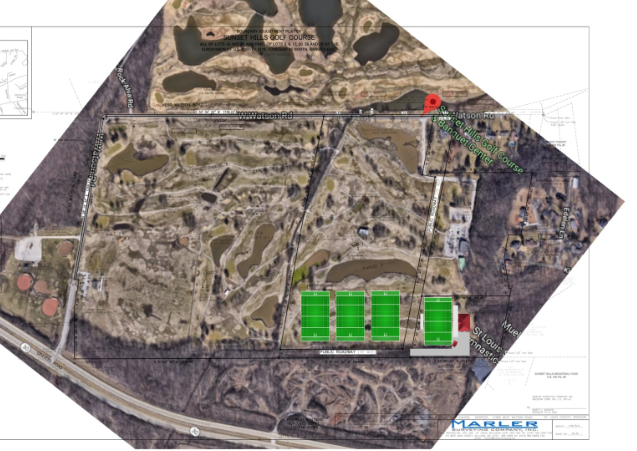 The St. Louis Bombers Rugby Club scored a successful pitch to the Sunset Hills Board of Aldermen at a Feb. 26 work session as the board unanimously approved a 25-year lease with the rugby club to use part of the city-owned Sunset Hills Golf Course as the team’s new rugby facility.

The rugby club initially approached the city about leasing part of the golf course to build its playing fields at the October board meeting. The proposal received overall positive reactions from the aldermen but no further action could be taken at the time because any use of the land was prohibited until the spring, when the city could officially decide what to do with the property.

The city closed on the 122-acre course in November after Steven Bander, a physician from Des Peres, donated it in September.

The Bombers will pay annual rent to lease 15 acres in the southeast corner of the course. The club would cover costs and maintenance of developing the fields and facilities, at no cost to the city. The lease also stipulates that the Bombers have to come to the city for all permits and approvals as they develop the facility.

The Bombers will pay $1,000 for the first year of rent, $2,000 for the second year and $3,000 for the remaining 23 years of the lease. After that, the club will have the option of extending the lease an additional 25 years under the same terms, except rent would increase at $4,000 annually for the first 10 years and then at an annual rate of $5,000 for each of the remaining 15 years. The rent increases are not cumulative.

“This would be a nice amenity to bring to the community and to residents, and it would bring in folks from all over St. Louis or even the Midwest to Sunset Hills,” said City Administrator Eric Sterman. “It fits in with the use of that land… I think this is something the board ought to consider.”

The facility the Bombers plan to build would have three fields — or pitches as they are known in the sport — along with bleachers, parking, restrooms and concession stands and lighting for at least one of the fields.

“Our plan is to develop a gem of a facility, not just some field mowed down,” said Bombers founder Ron Laszewski. “This is going to be something that everyone will take pride in…the residents of Sunset Hills, the rugby community and everybody.”

Rugby is the fastest growing sport in the country and is being driven by youth and high-school leagues, Laszewski said. Lindbergh High School’s rugby team would use the facility for practices.

Sunset Hills residents would receive a 10-percent discount to use the facility.

The team already has $250,000 committed from alumni and other donors to put toward funding the new pitches, with half of that already in the bank. The project is estimated to cost $320,000 for the initial three fields and other amenities.

When Ward 4 Alderman Thompson Price asked for a timeline, Laszewski said the team hopes to break ground in late spring following environmental studies on the property and that “we could be playing by the fall season.”

Following the Bombers presentation, aldermen focused on what to do with the remaining 100-plus acres of the donated land. A portion will be the city’s driving range, which Sunset Hills will operate and maintain.

Some aldermen were concerned about allowing the rest of the golf course to return to its natural state. Sterman said that the plan was to keep the golf cart paths clear as walking trails, but that “at this point there are not the resources to proactively keep the entire 100-plus acres manicured, mowed or things of that nature.”

The property will be dedicated as the Steven J. Bander Park at the request of Bander. The city will hold a ribbon cutting ceremony sometime later in the spring when the weather is better, Mayor Pat Fribis said.