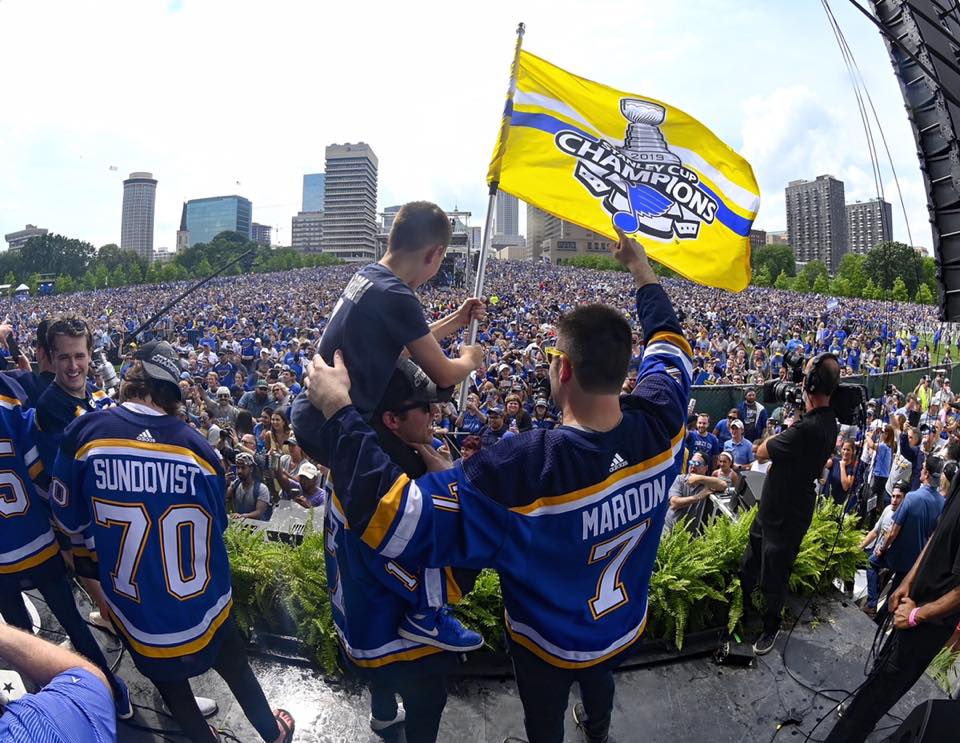 Oakville native Pat Maroon (No. 7, right) waves at the crowd of hundreds of thousands under the Arch and down Market Street at the Blues’ Stanley Cup parade Saturday. Maroon’s son Anthony, 10, sits on the shoulders of player Jaden Schwartz, and Oskar Sundqvist (No. 70) is also pictured. The night the Blues won the Cup, Anthony said his father would bring it to Telegraph Road in Oakville.

In a storybook ending 52 years in the making, the St. Louis Blues won the team’s first-ever Stanley Cup last week, defeating the Boston Bruins 4-1 in a Game 7 that was the most-watched hockey game in history.

The Blues celebrated Saturday with a victory parade that brought an estimated 500,000 to a million fans to line Market Street in downtown St. Louis and then rally under the Gateway Arch.

The team is the only major-league sports team to ever go from last place in the standings so late in a season to win a championship. The team was dead last in the NHL Jan. 3, and two days later rookie goalie Jordan Binnington debuted with a shutout, turning the tide along with the new victory song “Gloria.”

One of the most inspiring stories from the team is that of Oakville native Pat Maroon, who took less money so that he could be closer to his son Anthony, 10. All the players were ecstatic to win hockey’s ultimate prize. But for 2007 Oakville High graduate Maroon, it was his childhood dream to hoist the Stanley Cup in a Blues uniform.

“I’m a hometown hero, baby!” Maroon said at the rally under the Arch, with fans lining downtown as far as the eye could see.

The Stanley Cup was originally supposed to be pulled by the Clydesdales accompanying team captain Alex Pietrangelo on the last float in the parade, but Maroon carried it down much of Market Street.

The only high-school bands in the parade were from South County: The Oakville High School Tiger Band, the OHS Golden Girls dance squad and cheerleaders, and the Lindbergh High School Spirit of St. Louis Marching Band, Flyerettes dance team and cheerleaders.

Lindbergh kicked off the parade, and Oakville marched among the players, directly before Maroon.

Smiling and shedding his ice-cold image, Binnington danced with the OHS band and the Golden Girls’ pom poms, even borrowing a tuba from OHS’ Jakob Geldmacher.

Other players like Ryan O’Reilly, the MVP of the playoffs, may not be from St. Louis. But they said it’s now home.

“This is a city of amazing hockey fans, amazingly nice people, and amazing drinkers as well,” he said while gazing out over the Arch crowd, wearing a cowboy hat. “They can really hold their stuff.”

The team also credited Laila Anderson with inspiring them to victory. The 11-year-old superfan and St. Louis Children’s Hospital patient with a rare disease started attending games as soon as her doctors allowed it after chemotherapy.

It was almost too good to be true, from the team to the weather to the parade itself.