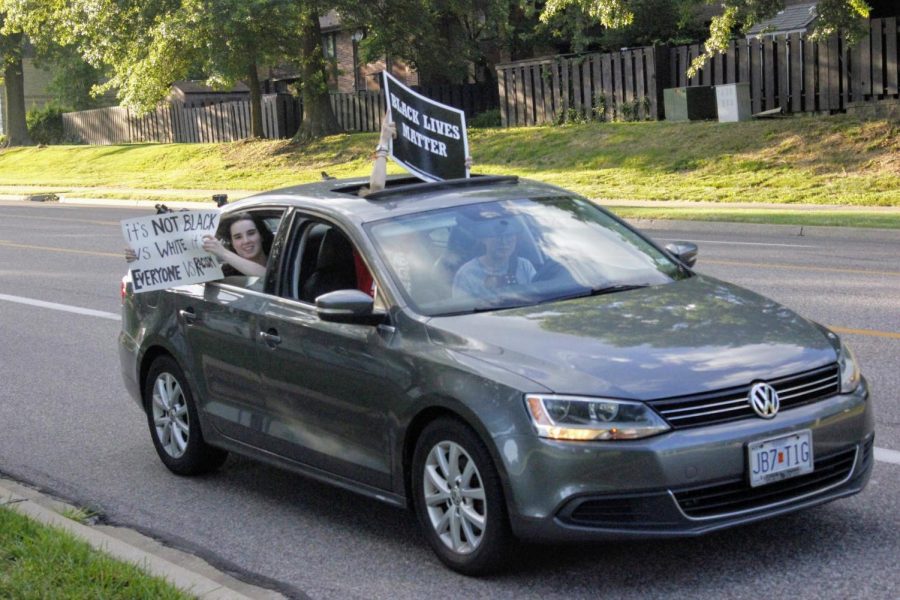 It was the second Black Lives Matter event to happen in South County, as similar events are sweeping the country after the death of George Floyd in Minneapolis on Memorial Day. In final moments captured on video, Floyd, a black man, died after a white police officer held him on the ground, the officer’s knee on his throat, as three other officers stood nearby.

Another Black Lives Matter event was held June 6 along in Affton, where sign-holders lined both sides of Gravois Road and peacefully protested racism.

The June 17 drive through Oakville’s roads was organized by Thomas Schartner, a 2020 OHS graduate and son of Mehlville Board of Education President Kevin Schartner. A parade of nearly 70 cars met at Oakville Middle School before heading down Telegraph Road and concluding at Bernard Middle School.

“That was really cool and really inspiring to see many people that really wanted to support the black community,” Thomas Schartner said.

Participants in the drive decorated their cars using signs and window paint, with slogans such as “Black Lives Matter” and “I can’t breathe.” Due to the ongoing coronavirus pandemic, most participants donned masks.

“The people in Oakville want to change things for the better and stand up for those who need help, who need support,” the younger Schartner said, adding, “The biggest takeaway I heard from other people was how happy they were to be a part of something in our community and showed how our community wanted to be.”

Thomas Schartner said he was inspired to host the drive after considering what else he could do to support the movement beyond signing petitions and donating money — and without having to physically attend a protest due to concerns about the coronavirus pandemic since a member of his family is immunocompromised. The idea of a “peaceful and safe” drive seemed like a good way to show support while also keeping everyone safe from COVID-19, just as other Oakville residents have used the drive-by parade concept to celebrate birthdays and graduations.

Some of Thomas Schartner’s former Mehlville teachers participated in the drive, including his first-grade teacher, who left him with some parting wisdom.

“I got in trouble all the time in first grade for speaking out without raising my hand. My report cards would say, ‘He doesn’t remember to raise a quiet hand.’ But she told me Wednesday, ‘Speak out, don’t worry about waiting,’” he said. “That’s a lesson that I think I am going to take with me for the rest of my life… That motivation to continue to speak up because the worst thing anyone can say is that they disagree with you, and that shouldn’t be a reason not to share beliefs or speak up.”

“The police were awesome,” said Schartner. “I have to give them a shout-out.”

Initial feedback from the community ahead of the drive was largely positive, “especially considering that South County is predominately white,” Schartner said. “The only thing that I’ve really seen in the negative feedback that we’ve gotten is that people see this as an anti-police event but it’s not, it’s a pro-black life and pro-black community event… The two don’t have to be mutually exclusive.”

Kevin Schartner initially posted the event, since Thomas wasn’t a member of the Oakville Facebook groups at the time.

In response to criticism from a few of that, the board president wrote, “This is not a school district event, it is a community event to show support for black people. It is not protesting anyone or any group. My support is that of a proud father and free thinking citizen… The issues are complex and I am proud to see our younger generation stepping up to take them on.”