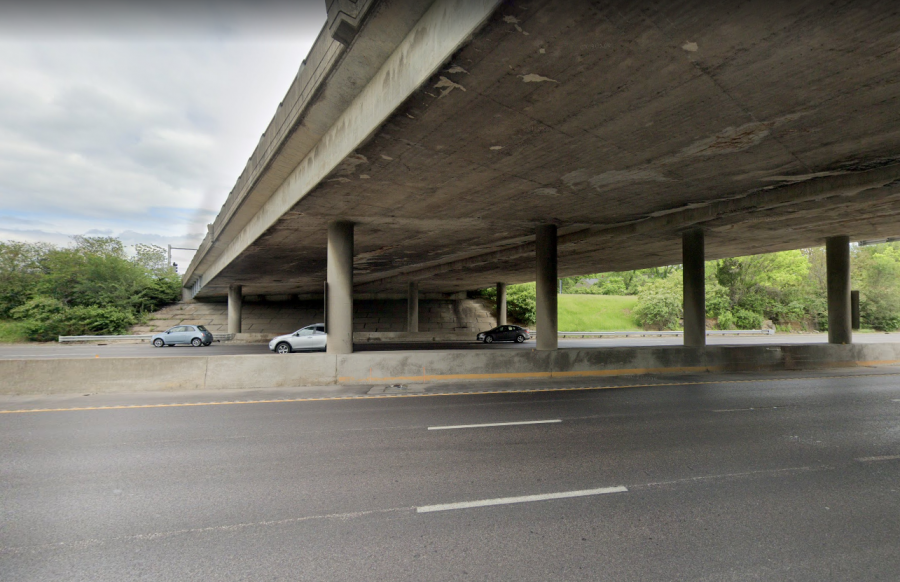 The Big Bend Bridge over Interstate 44.

Drivers who use the Big Bend bridge over Interstate 44 in Oakland will have to find an alternative route starting in the spring next year, when the Missouri Department of Transportation is slated to replace the bridge.

While the bridge is technically in Oakland, it is close to Crestwood city limits and the closest interstate exit is to Crestwood.

The bridge was built in 1967 and requires constant maintenance, MoDOT engineers said at a virtual town hall on the project last Tuesday. Because maintenance is so routine, it would be cheaper in the long run to replace the bridge all together.

According to the timeline provided by MoDOT, project bids would go out this fall, with construction anticipated to begin in spring 2022. Big Bend itself will be closed approximately four months and I-44 will be closed at least one weekend to demolish the bridge. During the project, I-44 will be reduced to three lanes for about 60 days.

Even when the bridge is out, the on and off ramps from I-44 will remain open during the day. There will be overnight closures of the ramps between eastbound I-44 and Big Bend and westbound I-44 and Big Bend for 10 days, although the 10 days the east side will be closed will differ from the 10 days the west side will be closed, said Burns & McDonnell civil engineer Dennis Koscielski. One side will always remain open and the overnight closures will be from 8 p.m. to 8 a.m.

“It’s just better for all at this time to replace this bridge in full,” said MoDOT engineer Ryan Pearcy. “We’re going to utilize the majority of the summer months that come up around there.”

Virtual attendees at the town hall were able to submit their questions via a question and answer chat box. MoDOT representatives and engineers then answered the questions out loud.

Most questions were about what detours would be utilized the four months Big Bend was closed and for the weekend that the interstate would be closed. Because MoDOT is a state-entity, it can only use assigned detours through MoDOT-controlled roads and not municipalities, said Pearcy.

“As far as local detours, we’ll try to work with some of the local folks around there. Obviously we’ll have traffic controls set up letting folks know the bridge is out. There’s always some kind of growing pain right off the bat,” said Pearcy . “Like I mentioned before, regarding detours, we can only do assigned detours on our own specific MoDOT routes. We can’t make assigned detours through other local city and municipality areas.”

Pearcy added that during the weekend the bridge would have to be demolished, MoDOT was looking at utilizing detours via Interstate 64 and Interstate 270.

While the interstate is closed, drivers will be routed up the ramps on either side of the bridge and back down to the interstate, similar to when the Watson Road bridge was replaced over Interstate 44 in 2019.

The project strictly deals with the bridge and not the interstate itself. Some attendees  of the town hall asked if there were plans to widen the on-ramps from Big Bend to I-44, but MoDOT representatives said that the project would focus solely on upgrading the bridge.

The bridge will be raised to updated interstate standards, which will reduce the amount of the times the bridge is struck. The bridge is being made slightly wider to accommodate updated Americans with Disabilities Act-compliant sidewalks and extra left turns are being added on the ramps from eastbound and westbound I-44.

The traffic signals will be moving to the near side of the bridge, also making the left turn lanes on the bridge shorter to accommodate for the stop lines moving back.

MoDOT spokesperson Andrew Gates said via chat that because the signals were moving to the near side of the bridge, a certain amount of space was required between the stop and the signals.

Crestwood resident Jim Zavist asked via chat if there were plans to include dual left turn lanes from Big Bend onto westbound I-44 but Pearcy said that was out of the scope of the project.

“The purpose and scope of this project is to replace the existing Big Bend bridge just regarding its serviceability. We looked into … whether to maintain … (or if) rehabbing this bridge was appropriate or replacement. It’s that replacement of the bridge, not widening of 44 that’s included in this area,” said Pearcy. “That’s kind of what we had budgeted and that’s what we’re estimating to work on. And that’s the end goal. There is no additional scope in this project to widen any additional lanes or receiving lanes around 44.”

MoDOT will continue to make any final design changes to the project throughout the spring before putting the project out to bid, estimated to occur in fall 2021. Construction is slated to begin in spring 2022 and will wrap-up in the fall the same year.

One attendee, Cheryl Rolfe, asked by way of the chat if it would be possible for construction to start earlier while most schools were still in some manner of virtual learning, and while traffic is reduced.

“It will need to be closed for four months based on what we looked at and the amount of work that needs to be completed, so we’re going utilize the majority of the summer months that come up around there but being a four month closure obviously it’s going to kind of bleed into one of the school year,” said Pearcy. “Regarding it going just a little bit sooner. Obviously that’s something we can discuss to see if it’d be adequate. … School is obviously something we’re always thinking about. .. I can see that being open to discussion.”