Missouri Gov. Mike Parson says more than 124,600 doses have been administered throughout the state 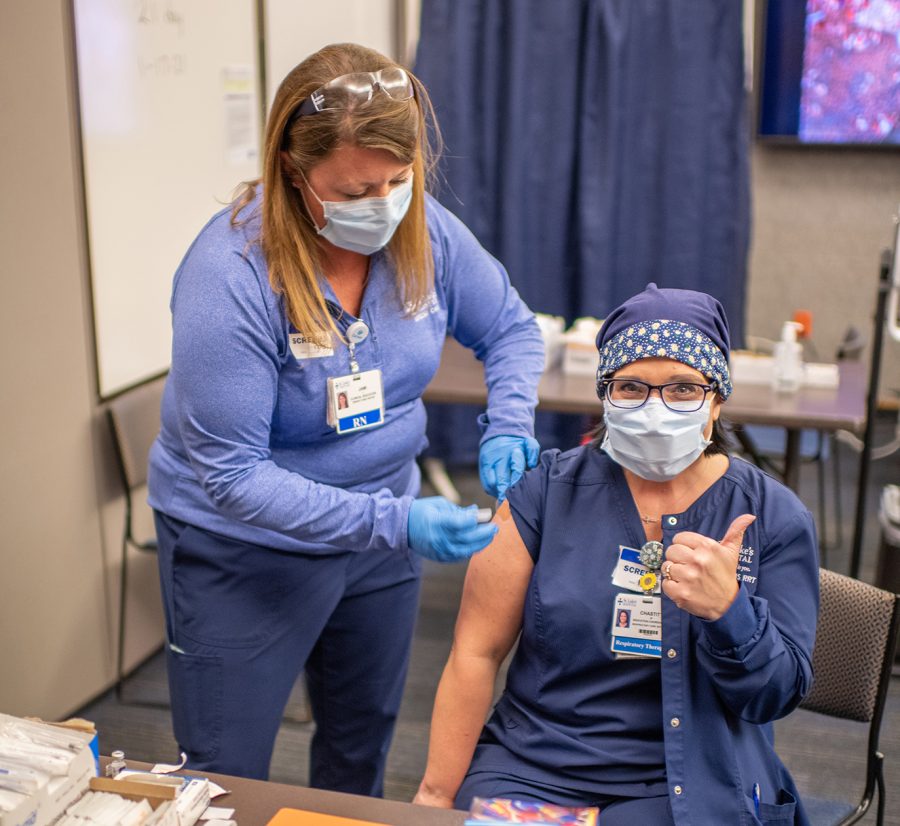 Respiratory therapist Chastity White, pictured above, is the first health-care worker at St. Luke's to get vaccinated against COVID-19.

WASHINGTON — More COVID-19 vaccine doses will be available to states sooner under changes that the incoming Biden administration is expected to make to how the Trump administration has been allocating those shots.

That’s according to comments a Biden transition spokesman made to CNN on Friday, indicating that President-elect Joe Biden will shift to “releasing available doses immediately.”

News of the policy shift comes after a group of Democratic governors — including those from Michigan, Kansas, Minnesota and Wisconsin — this week called on federal officials to accelerate distribution of the available vaccines from Pfizer/BioNTech and Moderna.

The Trump administration, through its Operation Warp Speed working group, has held back the second dose of the two-shot vaccine regimens, saying the approach is to ensure that the follow-up dose will be available for each person who receives the initial shot. The data on whether the current vaccines are effective is based on taking two doses over the course of two to three weeks.

But the vaccine rollout has gone slower than some have hoped. Of the 21.4 million doses distributed to states since federal health officials approved the first vaccine in mid-December, only 6.25 million doses have been given, according to a state-by-state tally by Bloomberg.

Friday morning, Missouri Gov. Mike Parson tweeted that more than 124,600 doses had been administered throughout the state. According to the Centers for Disease Control and Prevention’s data as of Thursday morning, about 401,050 doses had been distributed to the state with 113,369 receiving their first dose — about 28 percent of the total doses received.

Missouri is still working through its first phase of eligible residents, which include long-term care facility residents and staff and frontline healthcare workers. It’s unclear when more residents will be able to receive doses as changing estimates at a federal level have stymied Missouri’s efforts to allocate doses to hospitals as previously scheduled.

Last month, hospitals in Clay County described confusion and delays after they were told their vaccine shipments would not be arriving as expected. Another hospital redistributing some of their doses ensured they received some, and it’s a model state health department officials have said will be “likely the only successful path forward.” State health officials have urged providers to contact the federal government and request the state receive more reliable allocation estimates at least a month out to better plan.

In a letter to Health and Human Services Secretary Alex Azar and Operation Warp Speed Chief Operating Officer Gen. Gustave Perna, eight Democratic governors argued that the agreements in place with vaccine manufacturers should give officials certainty that the distribution pipeline is “robust” and that they do not need to reserve doses.

“While some of these life-saving vaccines are sitting in Pfizer freezers, our nation is losing 2,661 Americans each day, according to the latest seven-day average,” the governors wrote. “The failure to distribute these doses to states who request them is unconscionable and unacceptable.”

“Our states are ready to work around the clock to ramp up distribution, get more shots in arms, and save more American lives,” they added.

Biden transition spokesman TJ Ducklo said in the statement to CNN that more information about how the incoming administration would shift distribution efforts would be announced next week.

“The president-elect believes we must accelerate distribution of the vaccine while continuing to ensure the Americans who need it most get it as soon as possible,” Ducklo said. “He supports releasing available doses immediately, and believes the government should stop holding back vaccine supply so we can get more shots in Americans’ arms now.”