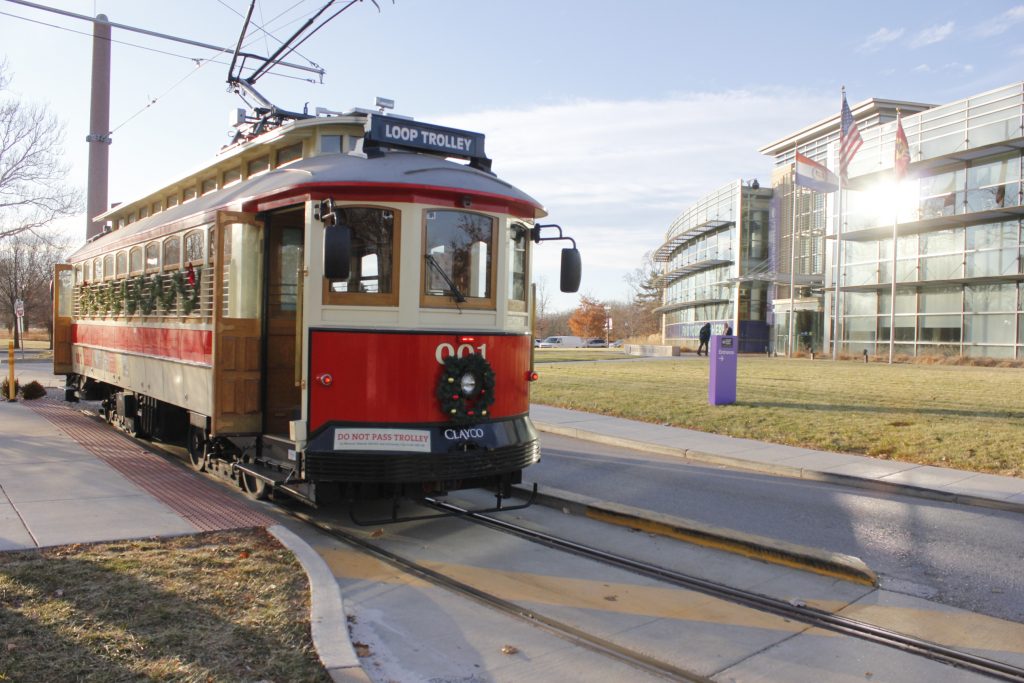 The Loop Trolley completes a run, with the last stop outside the Missouri History Museum at Forest Park back in December. Photo by Erin Achenbach.

A committee of Bi-State Development Agency commissioners hit the brakes on a plan from city and county officials for Bi-State to take over the failed Loop Trolley Jan. 24, and it is unclear if the trolley will ever ride again.

A plan to take over and operate the Loop Trolley, which shut down Dec. 29, had been in the works for the last few months, promoted by what Bi-State CEO Taulby Roach called “the electeds” — County Executive Sam Page and St. Louis Mayor Lyda Krewson. They wanted him to come up with a plan that would save the $52 million trolley without using local tax dollars.

Roach said he did just that, gaining special permission from a regional administrator at the Federal Transit Administration to use $1.9 million in unused federal dollars from previous Metro projects to subsidize the operation of the trolley for four years, including an $800,000 emergency capital fund for any repairs needed.

The full board voted for Roach to examine the issue in December, but when St. Louis County commissioner Rose Windmiller made the motion Jan. 24 to recommend the full board approve the takeover, she didn’t get a second.

It was unclear whether the trolley will now be revived. Theoretically, Roach could modify the plan and bring it back, possibly to the full board. But he told The Call he didn’t see that happening.

“For now my Board of Commissioners have looked at what I’ve done to date, and there’s no reason for me to move forward based on their vote,” Roach said.

Between the December rollout of the plan and the Jan. 24 decision, Roach had changed the plan so that Bi-State wouldn’t take ownership of the trolley and its properties. Instead, it would enter into a management agreement and operate the trolley for four years.

After four or five years, depending on sales tax growth, Roach projected that the trolley could become self-sustaining off its special sales-tax district, the Loop Trolley Transportation Development District or TDD. The TDD’s statute requires that the head of Bi-State sit on its board, along with the county executive and city mayor.

Saving the trolley was an important enough initiative for the federal government that FTA Region 7 Administrator Mokhtee Ahmad drove from Kansas City in the snow to attend the Jan. 24 Bi-State meeting. Ahmad said that if Bi-State didn’t take over the trolley, the federal government would file a lawsuit against the Loop Trolley TDD and the East-West Gateway Council of Governments to get the money.

If taken, that action appears unprecedented in FTA history: Asked if that had ever been done before, Ahmad mentioned that elsewhere in the country the government once had to write a letter to a city to make sure that a project was finished and funds were used as a grant required.

The city complied, and no lawsuit had to be filed.

One of the reasons that regional officials might want to save the trolley is to not have to pay back the competitive federal Urban Circulator grant that the St. Louis trolley was awarded over 60 other competing cities.

They also worry that if the trolley goes into default owing the FTA money, the federal government will hesitate to give the entire St. Louis region federal road money and grants in the future.

At stake would be about $25 million of the $52 million total cost of the trolley. The rest of the money funded infrastructure improvements along the route of the trolley that would not be clawed back because they were made and are in use, and the roads needed them anyway, Ahmad has said.

But while Ahmad declined to outright say that the federal government would go after the money, he said a “failure to perform” would be taken into account by federal officials.

“Outwardly we would tell you that no. it has no effect,” Ahmad said. “But that certainly would be a factor.”