Better Together changes after Stenger subpoena: ‘Metro Mayor’ elected in 2022, not 2024 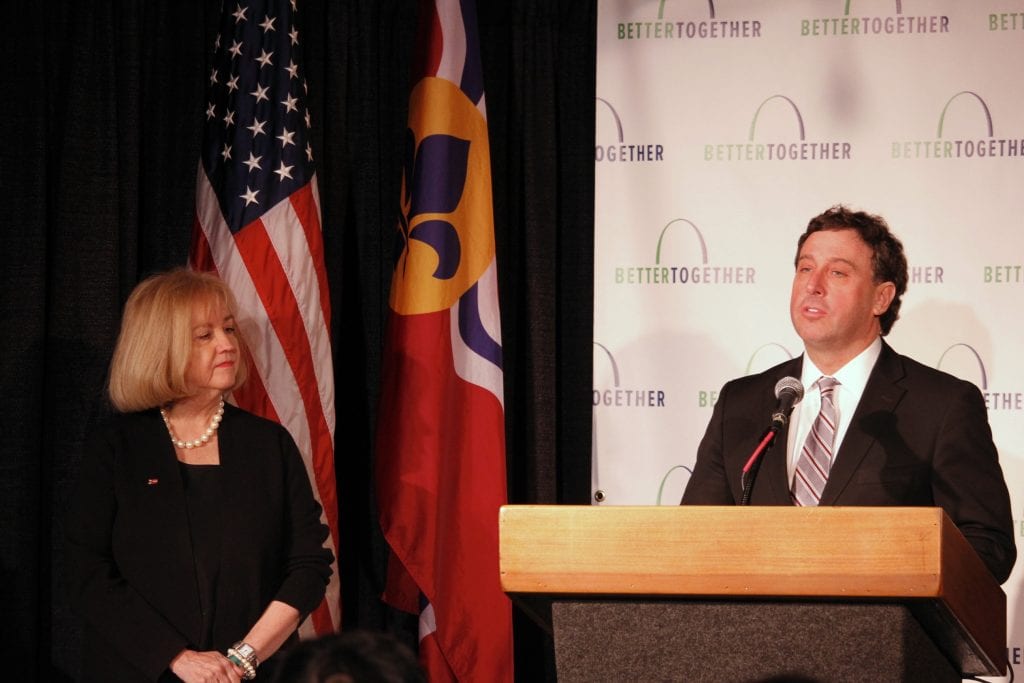 A day after County Executive Steve Stenger, the choice for the St. Louis city-county merger’s “Metro Mayor,” said he was issued a federal subpoena, Better Together planned to resubmit its petition to the Missouri secretary of state Monday to change a key part of its plan for a merger — who would serve as “metro mayor” for the first official years of the metro city.

The nonprofit advocacy group hopes to merge St. Louis County and St. Louis city into one “metro city” government under a single “metro mayor” and police department through a statewide vote on an amendment to the Missouri Constitution in November 2020.

Originally, Better Together said that Stenger would serve as metro mayor for the first two transition years of the plan if voters approve, starting in 2021 through 2023. That matches Stenger’s current four-year term as county executive, and he would serve alongside “transition mayor,” St. Louis Mayor Lyda Krewson.

But in a clause that stirred strong opposition, Stenger would become the sole, powerful “metro mayor” under the plan at the official start of the city Jan. 1, 2023, serving through Jan. 1, 2025. The 33-member “metro council” would be elected in 2022.

Under the plan, all county officials — Stenger, Prosecuting Attorney Wesley Bell and Assessor Jake Zimmerman — would serve in their same roles for the first two years of the metro city. It ensured stability and continuity, they said, but critics said it was undemocratic, especially for city voters who had never elected any of them. The plan essentially does away with the existing St. Louis city government, even dissolving the St. Louis Board of Aldermen while other municipalities can keep their existing government officials by converting to “municipal districts.”

Rev. Starsky Wilson, chair of the Ferguson Commission, called the prospect of city residents living under an unelected government “apartheid.”

But Unite STL, the campaign committee for the merger amendment, announced Monday that the amendment will now be amended so that the metro mayor is elected in 2022: “Obviously, this is not a decision you make rashly or quickly. Rather, we have come to believe over time that the concerns expressed were reasonable, well-taken and needed to be addressed.”

In another change, the “transition mayor” from St. Louis city would also serve as co-metro mayor for those two transition years.

The announcement came the day after news broke that a federal grand jury had issued a subpoena against Stenger for documents related to the relationship between county contracts and his campaign donors.

The plan will also be modified to note that the first “metro mayor” taking office during the transition will be whoever is county executive as of Jan. 1, 2021, not Jan. 1, 2019, and the same for the “transition mayor” from the city of St. Louis. The previous language opened the possibility that if Stenger was indicted or forced from office, as some members of the County Council hope, he would still come back as metro mayor.

The question of why Better Together set Stenger up for an unelected two years in office was posed at the press conference after the plan was announced Jan. 28.

“In other cities who have done the very same thing that we’re doing, there is always a transition period and in order to stand up a government and have continuity, that is necessary from a legal perspective,” Stenger said.

Better Together Director of Community Studies Dave Leipholtz said the inspiration came, like so many other aspects of the plan, from looking at other cities that have been through a merger.

“We looked at other regions, and that continuity is an important piece so you’re not bringing in that 33-member council at the same time you’re bringing in an all new executive,” Leipholtz said. “So staggering that over a couple years provides an extra layer of stability. We have the two-year formal transition period, but it also goes on for a few years after that as well.”

It’s the largest change made so far to Better Together’s plan, which was submitted to the Missouri secretary of state the same day it was unveiled. A refiling last month made more minor changes clarifying some finer points of the plan.

At Better Together’s third of eight town halls last week, held in Des Peres, 3rd District County Councilman Tim Fitch, R-Fenton, asked Better Together Deputy Director of Community-Based Studies Marius Johnson-Malone if any changes would be made to the plan, and if not, why was the group wasting residents’ time with town halls?

Johnson-Malone said no changes would be made to the plan.

Now with the news that changes would be made, 6th District Councilman Ernie Trakas, R-Oakville, who opposes the merger and has said Stenger would be its “monarch,” called the reasoning “very, very convenient spin” that he’s not buying.

“It’s hardly an accident that literally the day after the story breaks all of a sudden they’ve decided that they’ve heard from the people and they’re no longer going to crown Mr. Stenger king without an election,” Trakas said. “I’m confident that Better Together likely had every indication that the investigation was ongoing and that the county government was the target.”

Fitch agreed, pointing out that Wilson made his comments in January, and residents have been speaking out against Stenger as an unelected mayor ever since.

“I can’t believe that they would even say it and think people will believe it,” he said.