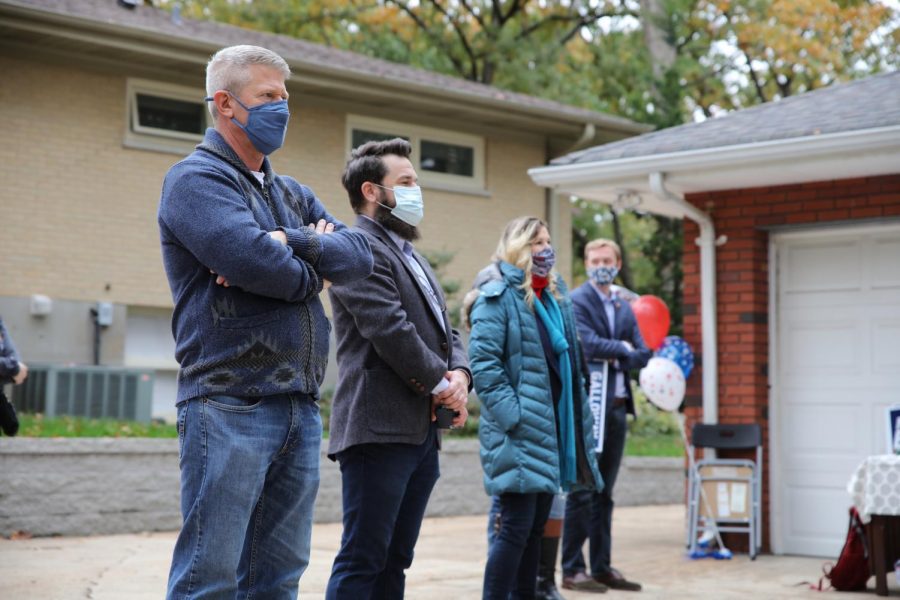 From left,1st District senator-elect Doug Beck and his successor to the 92nd District House seat, Michael Burton. Beck and Burton were two of just three Democrats to win their races in South County, joined by Bridget Walsh Moore who took the 93rd District.

Doug Beck will bring his emphasis on working-class issues and unions to Jefferson City next year to represent South County, but this time he will be in the state Senate instead of the House of Representatives.

Beck, an Affton Democrat who since 2016 has represented the 92nd House District that includes Affton and Concord Plaza, will be sworn in as senator for the 1st Senate District in January 2021. He will succeed Sen. Scott Sifton, D-Affton, who was term-limited and could not run for re-election. Like Sifton, Beck  served on the Affton Board of Education for many years.

Even as Republicans won up and down the ballot across the state and in South County, Beck defeated Republican rival and political newcomer from Oakville David Lenihan, 55.35 percent to 44.65 percent, or 53,274 votes to 42,980. He was one of three Democrats in South County to win their legislative races, and is the only Democrat statewide who won a Senate race in a swing district.

“We had some great candidates down here, but with COVID I think some of them struggled with name recognition. It’s hard to get the message out without getting to talk to people. That’s how campaigns work,” Beck said to The Call. “I think a lot of it came down to messaging. My campaign’s message was straightforward: Standing up for workers’ rights and public education. Simple messages that I think do well in this area.”

When Beck announced that he would be running for Sifton’s seat in January 2019, the COVID-19 pandemic and subsequent economic crisis were issues no one could have foreseen, but the issue soon became the overarching theme of Beck’s campaign. He cited the pandemic as his No. 1 priority during the election.

“Since last spring it’s been the only thing on our mind,” said Beck of COVID-19. “We decided early on that we were not going to knock doors and talk to people … because of public health reasons. … We didn’t get the one-on-one time with voters and we were frustrated by that, but we were successful.”

While phone banking and speaking with constituents, Beck said that most of them expressed fear of the unknown and what would happen with the pandemic.

“A lot of folks were just fearful of not knowing what’s next and what’s coming and how their lives are going to be,” said Beck. “We also heard people want us to protect public education, public safety … but for the most part the No. 1 issue was COVID.”

COVID continues to cause interruptions to Beck’s pathway to the Senate. While the House is in special session, a special session for the state Senate that was scheduled to begin Nov. 19 was postponed after several Senate members tested positive for coronavirus after attending a GOP retreat in Branson with Gov. Mike Parson, where few senators or Parson wore masks. Pictured without masks were Sen. Paul Wieland, R-Jefferson County, and Sen. Andrew Koenig, R-Manchester.

“It slows my (Senate) orientation. … Now they’re gonna do that in December which cuts it close to session,” said Beck, who has been a vocal supporter of a statewide mask mandate (see Page 20A).

“St. Louis County is surrounded by counties that don’t have mandates. They come to St. Louis County to work. They take stuff with them and bring stuff back. The virus doesn’t know these invisible lines,” said Beck. “It would be really nice to have a unified policy across the state and across the county. We’re talking about folks not being able to have Thanksgiving or see their grandchildren. … It didn’t have to be this way if we had policies in place in the first place. … Calling on people to take personal responsibility to wear a mask just is not working and it needs to be mandated.”

Masks for lawmakers at the Capitol in Jefferson City are optional, and Beck says that usage among legislators largely falls along party lines. Few of the GOP senators at the retreat in Branson wore masks.

“The vast majority of Democrats wear them, if not all,” 162 people plus staff, Beck said. “All the Democrats have theirs on, with 15 to 20 percent of Republicans wearing them. It feels like when we’re in Jefferson City no one wants to talk about COVID. People don’t talk about it, they act like it’ll go away. We have to deal with it — it will destroy the economy and the state. It’s already wreaking havoc on our hospitals and I fear what it will look like in two weeks.”

Beck told The Call that he has a number of priorities when he takes the Senate seat come January, but the first bill he plans to file would allow school districts to have lactation rooms to give teachers and students a space to breastfeed or express milk. He previously filed legislation for the same thing in the House last year, but the bill died before making it to committee.

Beck said he was inspired to sponsor the legislation after serving on the Early Childhood Commission in 2018 and speaking with a teacher who was also a parent.

“We had a great conversation about it and I thought it was a great idea. … It was going to get a hearing, but then COVID cut the session short,” said Beck. “It was kind of frustrating, but I think it’s a great bill.”

Other priorities for the lawmaker include sponsoring legislation that provides more worker training and workforce development opportunities, especially in light of unemployment from the pandemic.

“People lost their jobs and those jobs aren’t coming back,” said Beck. “We need to train people in new jobs.”

Beck also wants to focus on implementing Medicaid expansion and passing legislation that would better prepare the state to handle an emergency like COVID in the future.

“We found out when this pandemic hit we weren’t ready. We didn’t have the PPE (personal protective equipment), et cetera. What I would like to see what we do is have a stockpile and rotate that stockpile out and keep it fresh and new,” said Beck. “That way we can try and be ready so we aren’t out buying masks that aren’t effective. It would also be nice to see those (the PPE) made in Missouri.”

As for his final thoughts on an unusual election season, Beck can only stress one thing: “Please, please wear a mask and be smart during this time. We need to keep social distancing and wearing a mask. These are the minimum things we can do.”