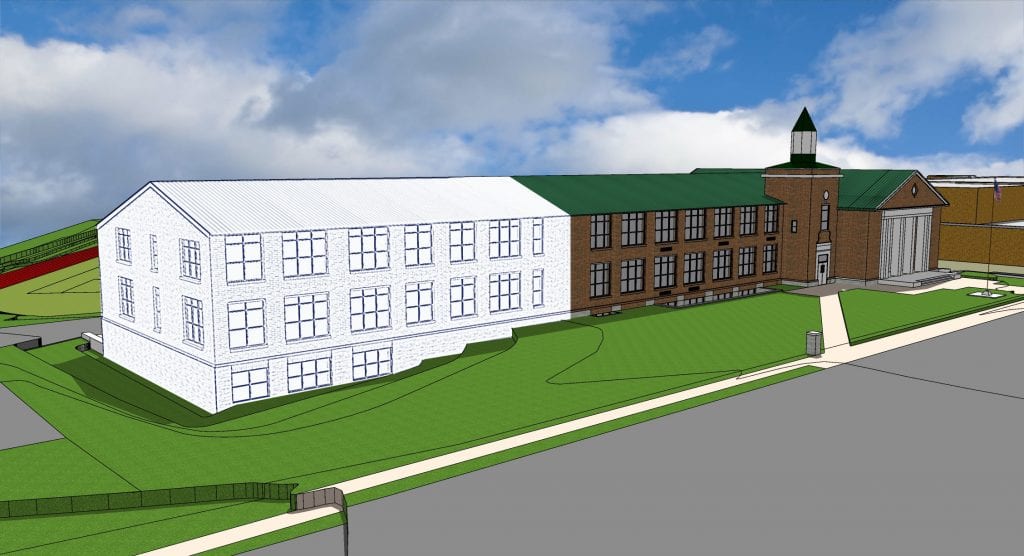 Pictured above: A rendering of the middle school expansion. Image courtesy of Bayless Schools.

Proposition 1, if voters approve it, would be used to expand the middle school to help alleviate overcrowding in both the middle and high schools. Currently, junior-high students have to walk to Bayless High School in rain, snow or sun to use the cafeteria, library and some classrooms.

This is not the first time that Bayless has attempted to address the issue of overcrowding at the middle school. In April 2018, voters approved an operational tax increase, which only has to get 50 percent of the vote. But Proposition A, a 34-cent tax-rate increase to bring in $10 million and do what Prop 1 will do and more, failed after it did not receive the 57.14 percent of yes votes necessary to pass a bond issue. It received 54 percent of the votes — more than the operational tax hike, but not enough to pass.

This time, the district took out a $3.5 million multi-use building proposed at Bayless High School that was included in last year’s failed ballot measure. That allows the district to offer Prop 1 to voters as a no-tax-rate-increase bond issue.

The middle school, originally built in 1934 as the district’s first high school, was constructed to accommodate 230 to 250 students. Enrollment now is 410.

“At any given time, half the students are being served in the high school,” said Assistant Superintendent and Chief Operating Officer Michael Hawkins. “It’s creating pressure on the high school as well, so they’re starting to feel the burden of overcrowding because their enrollment has increased to 525. And the largest class isn’t even here yet — it’s coming through the elementary.”

Prop 1 would fund 18 new educational spaces and classrooms in the middle school, as well as a new cafeteria and library, in addition to other scheduled maintenance and renovation work throughout the district.

By adding the additional classroom spaces, cafeteria and library, junior-high students would no longer have to travel to the high school, alleviating security and safety issues as well as making things more convenient for students. Since the high school’s cafeteria is not large enough to accommodate both the high-school students and junior-high students at once, some middle-school students eat lunch as early at 10 a.m.

“If we could build onto our junior high, we can free up space at the high school. There’s a lot of people moving into Bayless,” said Superintendent Ronald Tucker, who was principal at the junior high for six years. “Enrollment is increasing, and it will be a domino effect on our high school.”

A self-contained middle school where students would no longer have to travel back and forth between the high school would address significant supervision and safety issues, he said.

The district’s 53-cent debt-service tax rate would remain unchanged if Prop 1 passes. It would bring in $7.3 million over the course of 20 years. Construction would begin immediately on the junior-high expansion.

In addition to that expansion, Prop 1 would also fund renovations for the men’s and women’s locker rooms at the high school, allow for Bayless to place a gravity flow sewage line and connect it to the MSD system south of Bayless High School, renovate the elementary school’s restrooms and replace the elementary school’s water fountains, among other needed fixes around the district. These needs would be addressed over the course of three to five years.

The district does plan to reintroduce the multi-use building again sometime in the future, as well as addressing the weight room at the high school since it is not ADA compliant, but those are issues that would be looked at six to seven years from now.