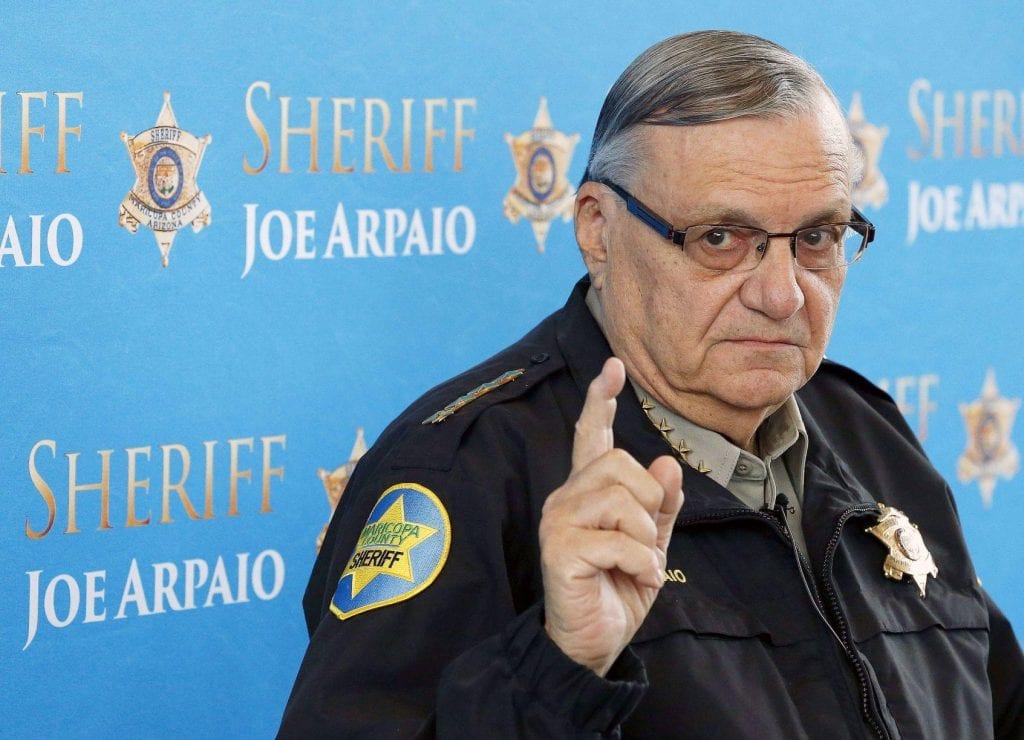 The St. Louis County Republicans are hosting their annual Lincoln/Reagan Day Dinner on March 23 and one of their keynote speakers, Joe Arpaio, has raised some eyebrows.

The Lincoln/Reagan Day dinner will be held from 6 to 10 p.m. on Saturday, March 23, at Orlando’s Event Center, 4300 Hoffmeister in Affton.

In addition to Arpaio and Mary Ann Mendoza, there will also be a speaker on the city-county merger. Funds raised from the dinner will go to local candidates to help them win their elections.

Joe Arpaio was the sheriff of Maricopa County, Arizona for 24 years. His tenure as sheriff saw multiple civil lawsuits levied against him from citizens arrested by Arpaio and his deputies, including wrongful death and entrapment. The U.S. Department of Justice filed a suit against him for unlawful discriminatory police conduct after determining that as sheriff he oversaw some of the worst racial profiling by a police department in history.

Arpaio was also the subject of several federal civil rights lawsuits. In one 10-year long suit in which he was the defendant, an injunction was issued against him by a federal court prohibiting him from conducting anymore “immigration roundups.” In July 2017 he was convicted of criminal contempt of court for continuing his immigration roundups despite the injunction, however in August of the same year, President Trump pardoned Arpaio.

“Arpaio has been a staunch advocate for sealing our southern border. His sheriff’s office was on the front lines of this issue for decades. His record speaks for itself…These are all issues that are incredibly relevant for St. Louis County and our Nation as a whole.”

The decision to invite Arpaio as the keynote speaker drew criticism from the Kansas City Star’s editorial board, which published an editorial on why the St. Louis County GOP’s decision was a mistake.

“Arpaio’s disregard for the rights of criminal suspects in his custody was legendary. He was a horrible public official, credibly and repeatedly accused of mismanagement, corruption and abuse of power. And, of course, ‘Sheriff Joe’ became the national symbol of improper anti-immigration enforcement, which got him in trouble with the law,” wrote the Star’s editorial board. “All of this is bad enough. But the St. Louis County GOP wants Arpaio to speak at a dinner named for Ronald Reagan and Abraham Lincoln. President Reagan signed one of the biggest immigration amnesty bills in American history. Lincoln’s civil rights record is pretty clear, too. Arpaio’s appearance besmirches both presidents.”

The St. Louis County GOP defended its decision to invite Arpaio, stating that the bipartisan criticism levied against Arpaio is the exact reasons conservatives celebrate him, because he “is a defender of our Constitution, and he enforces the law.”

Immigration is a the theme of this year’s Lincoln/Reagan Day Dinner. In addition to Arpaio, Mary Ann Mendoza, the mother of Sgt. Brandon Mendoza, will also speak at the event.

She is billed as an “angel mom” for being the mother of a person killed by an illegal immigrant.

Sgt. Mendoza was killed when his police car was hit by a drunk driver in May 2014. The driver, Raul Silva-Corona, who was in the country illegally, had a previous criminal record spanning back to 1994 but had not been deported despite those crimes.

More information for those wishing to attend the event or find out more – click here.