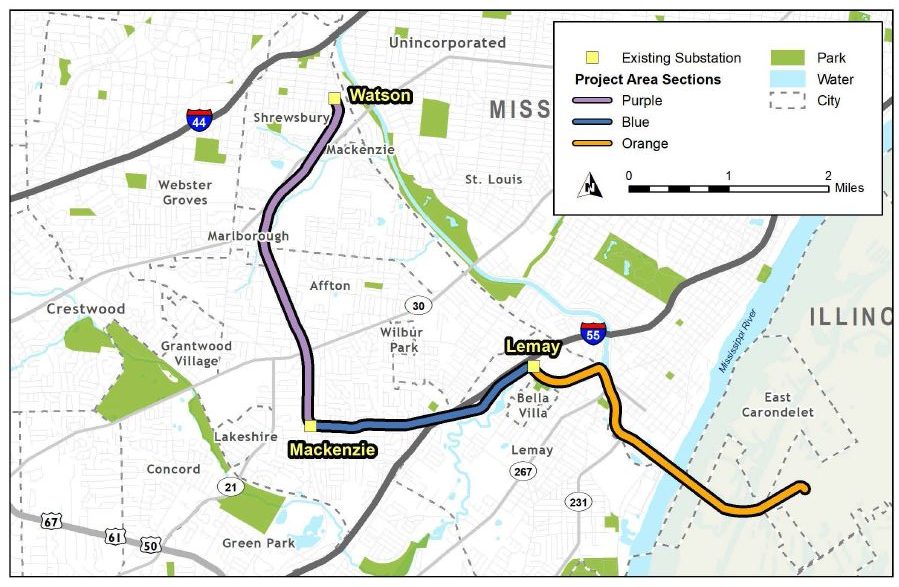 A map of the Metro South Reliability Project, showing the current easements and where the updates will be taking place. The project is scheduled to be completed by winter 2021. Image courtesy of Ameren Missouri.

Ameren Missouri is planning to rebuild nearly 10 miles of transmission line in South St. Louis County centering on Affton and Lemay in an undertaking known as the Metro South Reliability Project.

At an open house Ameren hosted in October at the Affton White-Rodgers Community Center, area residents were able to come and learn more about the project and how their power services or property could be affected.

The $30 million project upgrades 10 miles of existing transmission lines in south county to 138 kilowatts using the easements installed by Union Electric in the 1950s. The path of the project starts at Watson Road in Shrewsbury and goes through Affton, Mackenzie and Lemay along Interstate 55, before crossing the Mississippi River and ending in Dupo, Illinois.

“The project will improve the grid to better meet energy needs,” Ameren spokeswoman Lori Light said at the open house, while citing the age of the existing transmission lines as a factor in the upgrades.

The new grid will utilize smart technology and incorporate cleaner sources of energy, such as wind and solar.

As part of the upgrades, Ameren will be replacing their four-legged lattices with monopole structures that have bases two-and-a-half times smaller than the current lattices.

“We will be reducing the footprint for property owners along the stretch,” said Light. “They’ll be gaining room with the project upgrades.”

Some residents had concerns about right-of-way acquisition along the line.

“There may be instances where personal property will need to be removed from the right-of-way area prior to construction. A land agent will work through this process with property owners adjacent to the line,” Ameren said on its Metro South Reliability Project website.

“Other concerns we’ve heard from residents is if they’re going to be without power,” said project engineer Suzanne Pohlman. “The answer is no.”

Customer rates will not be immediately impacted by the project, since rates are frozen through 2020 after legislation passed by the Missouri General Assembly during the 2018 legislative session.

“We don’t really have any concerns, but we came to be more informed,” said open house attendees Rhonda Kottemann and Nancy Ulrich of Affton. “So far it all sounds positive. Progress is always good.”

The project is slated to begin in fall 2019 and be completed by winter 2021, a year before Ameren’s Meramec Energy Center, the coal plant in Oakville, is scheduled to close. Ameren plans to host more open houses in summer 2019 and continue community outreach until the project is completed.