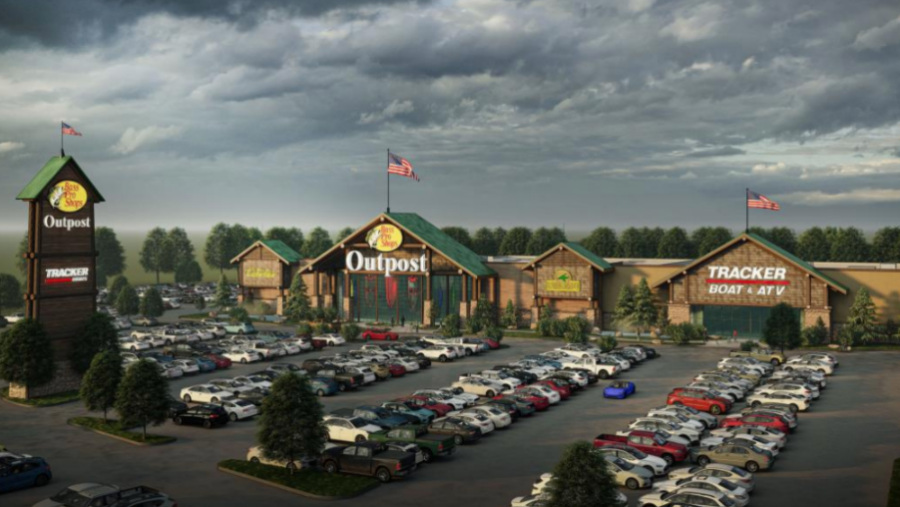 A rendering of the proposed Bass Pro Shops in Sunset Hills.

The city’s Board of Aldermen unanimously voted 7-0 at its March 8 meeting to approve the amended development plan for Bass Pro to open at the Shoppes at Sunset Hills shopping center, 3600 S. Lindbergh Blvd. Ward 4 Alderman Thompson Price was absent.

Bass Pro Shops expects to complete construction by September, with a November opening. The demolition process is already underway.

The shopping center itself was constructed in 1997. It is composed of two parts: the 92,074-square-foot building housing the former Toys “R” Us and Ross Dress for Less as well as The Tile Shop — which will remain — and a 5,500 square-foot outparcel occupied by a LongHorn Steakhouse. Bass Pro is expected occupy 75,000-square-feet of this center, with plans to hire over 100 employees.

The developer plans to also develop Watson Road access to and from the center. Traffic concerns have been a major focus of discussion surrounding the project. This includes the ability to handle increased traffic volumes at the existing shopping center entrance, as well as the “weaving condition” on Lindbergh Boulevard from eastbound Watson Road to the center.

Grant Mechlin with the Sansone Group had previously stated to the board that the Missouri Department of Transportation had conceptually approved a right-in entry from eastbound Watson Road in order to alleviate some of the traffic concerns.

“We’ve given ourselves nine months to complete the construction for the Watson Road access. … Our hope is in a perfect world is that the Bass Pro will be open in November before Thanksgiving and that we will have Watson Road access completed by late first quarter to early second quarter 2023,” Mechlin said.

The store will open with the help of incentives — last September, aldermen approved a 40-year, 1-percent community improvement district for the Bass Pro.