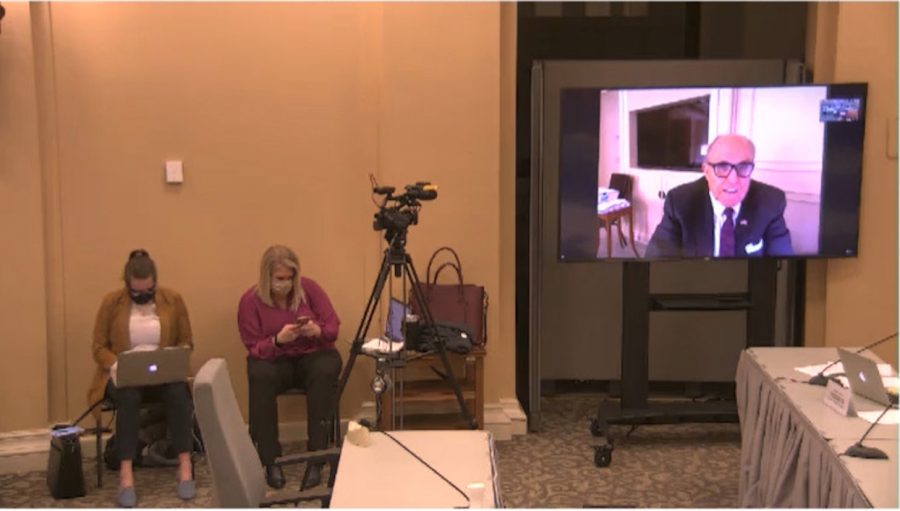 A Democratic state representative from Missouri accused Trump attorney Rudy Giuliani of lying to overturn the presidential election in a hearing held by a state committee Dec. 14. The former New York City mayor responded by calling the lawmaker dangerous to democracy.

The exchange came during a House Special Committee on Government Oversight hearing on a resolution asking Congress to reject the electoral votes of six states won by President-elect Joe Biden if claims of fraud are not investigated.

After ticking off the Republican officials and judges who have rejected claims of fraud and other election shenanigans, state Rep. Peter Merideth, D-St. Louis, asked Giuliani: “Are all these Republicans lying? Are they complicit? Are they incompetent?”

In response, Giuliani said: “Instead of getting so upset and angry I would ask you to calm down and look at the videotape from Fulton County…”

“I won’t be calm with people trying to overthrow the results of an election and seeking to ignore the votes of six states of Americans,” he said. “I think we are right to be upset.”

“I have no interest in more and more lies,” Merideth said.

“You are very dangerous because you are covering up a massive election fraud,” Giuliani retorted.

The heated exchange came about 90 minutes into the hearing on legislation sponsored by state Rep. Justin Hill, R-Lake St. Louis. When the testimony was over, the committee voted 6-3 on party lines to approve the nonbinding resolution which states that the Missouri House has “no faith” in the vote tallies of six battleground states.

But it is unlikely the full 163-member House will get a chance to debate or vote on the resolution. House Rules-Legislative Oversight Committee Chairman Rocky Miller, R-Lake Ozark, issued a statement that night saying he will not convene the second hearing required to send the bill to the full House.

Miller noted that the resolution is the type the House uses to make its views known on a variety of subjects and has no force of law.

Introduction of the resolution delayed the conclusion of a special legislative session called by Gov. Mike Parson. The Senate had already adjourned.

“We are in the midst of a health and financial crisis and we should be extra diligent in our decisions,” Miller said. “I fully believe that the additional publicity that would be gained beyond the filing and committee hearing is outweighed by the cost, both directly and indirectly and health risk.”

After House Democratic Leader Crystal Quade of Springfield noted that she had seen social media reports of Miller’s decision, Hill addressed it at the end of the hearing.

“I am pretty disappointed in something I heard tonight,” Hill said. “I’ve heard a lot of voter suppression claims in the past, but never before have I heard such a voter suppression statement than that this bill is dead because the chairman of the upper committee said so, so as to affect the votes in this committee. How low.”

The hearing started about three hours after Missouri’s 10 presidential electors cast ballots, as did the rest of the nation’s electors, ratifying the popular vote by giving Biden a majority of 306-232 for President Donald Trump.

The resolution shows some Missouri Republicans want to keep fighting to prevent Biden from being sworn in Jan. 20.

The remedy Hill is seeking would be unprecedented.

The electoral votes of every state have been accepted as presented, almost without objection, in every election since 1876.

Trump’s last-gasp effort to win the presidential election in court ended Dec. 11. That is when the Supreme Court rejected a lawsuit brought by Texas and joined by Missouri and 17 other Republican-led states to overturn the election in  Michigan, Georgia, Wisconsin and Pennsylvania.

“Texas has not demonstrated a judicially cognizable interest in the manner in which another State conducts its elections,” the court ruled in the unsigned decision.

As he presented the resolution, Hill said if the claims of fraud in the election are not taken seriously, and if the election is not reversed, then it harms the people of Missouri.

“I know we have heard from people across the country that there has been no evidence of widespread fraud,” Hill said. “However, there is a lot of evidence  of small amounts of fraud.”

In his testimony, given via video link, Giuliani repeated claims made in other venues that observers were prevented from watching ballot validation, that large numbers of ballots were surreptitiously added to the count in Georgia and several other claims.

“I said the courts have held no hearings,” Giuliani said. “They have dismissed the cases that have been brought on procedural grounds, like standing.”

During the vote, most members made a statement about why they were voting as they were and of the six Republicans, five made strong statements in favor of Hill’s resolution.

“It seems as though it is only right that we should look at any and every claim as it relates to the safety and security of our elections,” said Rep. Dirk Deaton, R-Noel.

“It is time to investigate these claims of voter fraud across the nation,” he said.

Only one Republican, state Rep. Rudy Veit, R-Wardsville, said he would vote against it on the House floor if it reached that point.

Democrats decried the time spent on the hearing, both because of the subject and because there there was little chance of final action.

State Rep. Wiley Price, D-St. Louis, said it was a waste of time.

“Dog and pony is all I really have today,” he said. “This bill isn’t going anywhere. It is a disappointment we were called in here. It feels like spilled milk.”