After spending a year in Afghanistan, construction engineer glad to be home 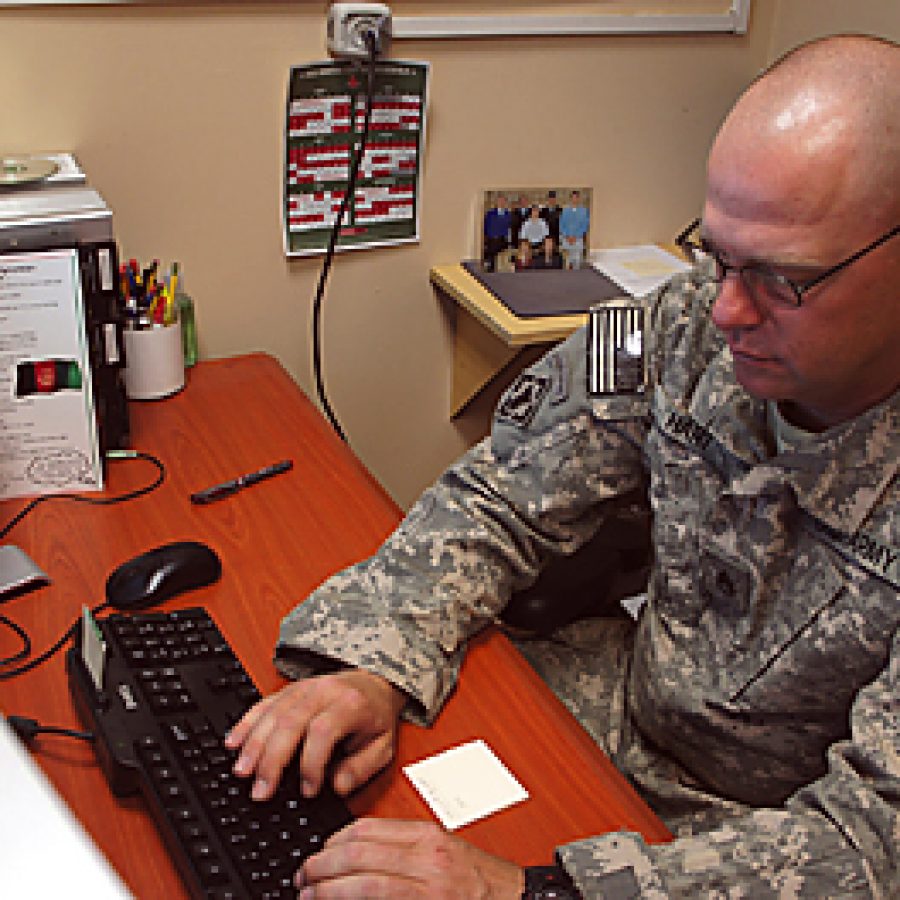 Army Reserve Staff Sgt. Jeffrey Hart used his drafting skills in a behind-the-scenes role as more than 130,000 U.S. and other coalition troops work toward transferring security authority to Afghan forces.

After spending months mapping out Afghan roads for fellow soldiers, Army Reserve Staff Sgt. Jeffrey Hart recently charted out a course for himself — back to St. Louis.

Family and friends welcomed Hart home last month after he completed a nearly yearlong deployment to Afghanistan. He’d been stationed near the capital, Kabul, since last June.

“It was a good homecoming,” Hart said last week, adding that he paid a visit to his son, A.J., at school in St. Peters, and to his nieces in the Mehlville School District. “We kind of took it easy.”

Hart spoke with the Call in late April from Afghanistan while still on active duty as a construction engineer with the 420th Engineering Brigade of the 416th Theater Engineer Command.

Using his drafting skills, Hart and his fellow soldiers played a behind-the-scenes role as more than 130,000 U.S. and other coalition troops work toward transferring security authority to Afghan forces.

He was responsible for drawing up floor plans, electrical layouts and other blueprints for various construction projects.

Among them: the biogas digester, a renewable energy source that converts animal waste, kitchen waste and other organic material into methane that can be used for cooking and heating.

“We use the infrastructure for this and we plot out alternate routes,” he said. “In Afghanistan there’s really no street signs per se, so what we do is we look at their infrastructure and create a map based on that to help our troops get to where they need to be, the safest way to go and all that.”

Hart said the work of the 420th resonated with the Afghan people, who, living in a nation embroiled in a nearly 10-year war, initially were leery of foreign troops.

“At first they were kind of standoffish,” he said. “But being engineers, when we started bringing engineer facets in — such as the biogas digester — once we started working on stuff like that for them, they became more open and willing to coexist with us while we were there.”

Hart, on his first deployment to Afghanistan and second overall, said violence around Kabul has been minimal in the past year.

“Since I’ve been here there’s been a lot more commerce on the street, more people out and about,” he said. “For the most part it seems to be improving.”

Hart and his comrades spent their evenings playing video games, watching movies and following sports, including baseball and their own fantasy football league. Hart would check in with his son and girlfriend, Kim, back home twice a week despite a 10-and-a-half-hour time difference.

“There were a few bumpy roads during the holidays when I couldn’t be home, but overall they’ve held up great,” he said of his family.

Hart had just begun a more than 7,000-mile journey back to St. Louis when he received a parting gift, of sorts.

“We actually left Bagram Airfield the day Osama bin Laden was shot,” he said, referring to the al-Qaida leader who was killed by U.S. Navy SEALs during a raid on his compound in Pakistan. “I was getting on a plane to Kuwait that day. They called everybody into the PAX (passenger) terminal to watch the breaking news. So there was like 300, 400 people inside a small room watching the news.”

The reaction, Hart recalled, was one of both relief and “wondering what was going to happen next.”

While President Barack Obama has said he will begin pulling troops out of Afghanistan next month, he and lawmakers are at odds over when a full withdrawal of U.S. forces should take place, especially given bin Laden’s death.

Hart, 40, is the son of Joyce and the late James Hart of Oakville. He was born in Colorado, raised in Arizona and moved to south county before starting high school.

Shortly thereafter he followed in his father’s footsteps and joined the military, completing basic and advanced training at Fort Leonard Wood.

He went on active duty for five years as a carpentry masonry specialist.

Hart’s first deployment was for Operation Desert Storm, where as a member of the 52nd Engineer Battalion he performed route clearance for the 3rd Armored Calvary Regiment.

After getting off active duty in 1994, Hart moved to Austin, Texas, where he studied and took an interest in computer-aided drafting and design.

“I got a drafting degree, so I started with AutoCAD (software) doing some drafting work and picked up the geospatial portion of that and learning how to do maps,” Hart said. “It’s just been an ongoing process learning and picking up new things.”

He returned a couple of years later to St. Louis, where he’s been an Army reservist ever since. Hart lives in Arnold but said he spends much of his time in Oakville.

Before his latest deployment, Hart was laid off from Martson, a mining consulting firm in St. Louis, because of the economic recession.

Now that he’s home again, he hopes to go back to school and continue his drafting career.

“People can’t go without drafting,” Hart said. “Anything and everything that’s out there in the world has to be drawn first before it can be made. It has to be a picture first. And that’s just something that I really enjoy doing.”