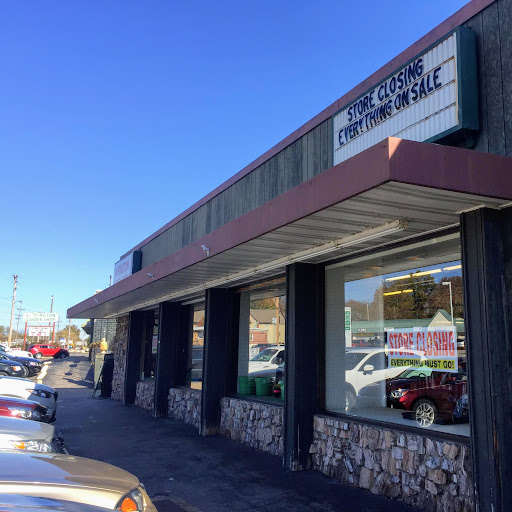 The Sappington Garden Shop advertises its store closing sale on Saturday, Nov. 10, 2018. The store closed in November and the property will be used for the new Affton Southwest Precinct. Photo by Gloria Lloyd.

The Sappington Garden Shop closes this week after 50 years, and the new Affton Southwest Precinct proposed for the site is moving forward even as the St. Louis County County Council focuses on a shakeup of the county board that is governing the deal.

The county is under contract to buy land for the new Proposition P-funded precinct at the site of the garden shop and across from Lindbergh Schools’ new Central Office.

The garden shop, which has been operated by the Heimos family at the site for more than 50 years, is slated to close this week after holding a liquidation sale of its annual Christmas shop.

Manager Annie Stanley, one of the nine children of original owners Norwin and the late Shirley Heimos, said she expects the store will likely close its doors for good by Saturday, Nov. 17.

But she said she’s not involved with the sale to the county. The precinct is currently being designed, and county officials said they expect ground to be broken for the complex “sometime in 2019.”

In May, police Chief Jon Belmar told the council that the St. Louis County Port Authority had already contracted to buy the 7-acre Sappington Garden site and planned to use four acres for the new precinct and sell the rest.

As one of Belmar’s promises with how to spend Prop P, a one-eighth of a cent countywide sales tax, he promised a new Affton precinct.

The aging Affton facility would be replaced with a more modern precinct similar to the new South County Precinct on Sappington Barracks Road.

The new site, on 4.1 acres and five parcels at 11448 through 11530 Gravois Road, is 2.6 miles and a five-minute drive down Gravois from the original location.

After Belmar’s May announcement, County Counselor Peter Krane suggested the council go into closed session with, among others, the head of the St. Louis Economic Development Partnership, Sheila Sweeney. The economic organization has close ties with the Port Authority and with County Executive Steve Stenger.

Soon after, 6th District Councilman Ernie Trakas, R-Oakville, and council Chairman Sam Page, D-Creve Coeur, said they had questions about the land deal and whether the Port Authority was authorized to approve it rather than the council.

They delayed but ultimately voted for a bill approving the design contract after ensuring that the county got an appraisal for the land — which hadn’t initially been done. The deal should move forward, Trakas said last week.

“The police chief has provided us with an appraisal, and we are simply waiting on legislation,” Trakas said this fall. “I believe that the ultimate legislation has to come through the council. The Port Authority could arguably say they could buy or sell, but at the end of the day the building of the precinct has to be approved by the council. And I’m not conceding that the Port Authority has unfettered authority to do anything.”

Stenger was re-elected to a second term last week.

“It’s not about the precinct, it’s about slowing down the precinct so that we don’t have a groundbreaking or a ribbon cutting before the election — which is shameful, but it’s what it is,” Stenger said. “They may push back on something like the precinct, but Ernie Trakas knows that he can’t turn that precinct down because there will be an outcry like never before from the people in his district. They were promised a police precinct, and they deserve a precinct. And he’s going to vote for it because his people require it.”

Trakas and Page spearheaded a bill passed by the council that essentially fired all the current Port Authority members, who were serving on expired terms.

The council approved a contract for design of the precinct to move forward, but no county official seemed certain about the precinct’s timeline last week in the wake of the shakeup of the Port Authority.

In the latest chapter of the ongoing feud between Stenger and the council last week, the council appointed its own members to the Port Authority. Stenger said the move to oust current board members was illegal, and he appointed his own competing members to add to the panel.

Stenger’s appointees met with the Port Authority in closed session for an hour and a half last week at the Economic Development Partnership’s office in Clayton to discuss legal issues, attorney Kim Diamond said.

She said she was unsure whether the legal makeup of the board was Stenger’s appointees or the council’s, but she believes it to be Stenger’s.

Stanley called her family’s many decades operating the Sappington Garden Shop the “ride of our lives.”

She hasn’t announced her next step yet, but doesn’t plan on retiring. But she will most miss the customers. Gardeners make the best customers, she said.

The Heimos family’s business started as a Christmas tree lot and, with the slogan “The Key to Outdoor Living,” grew into a staple of south county and a “lifetime of love, family and work” for more than 50 years.

“It is time for this chapter in our lives to close,” Stanley said. “It is truly bittersweet.”

The Heimoses bought the land from the Wagner family in 1951. They first operated Sappington Fruit and Produce at 11530 Gravois, then built a new market at 11520 Gravois and operated out of that building for years.

The family, then with seven children, also lived in the market building. When the family grew to nine children, they moved to a larger home in Oakville.

Business in those days was another world entirely, Stanley said. “Blue laws” prohibited sales on Sunday, but Sappington Fruit and Produce could still stay open because it was a produce outlet for truck farmers.

“People from all over south county would come and buy produce and get their fireworks in one location,” she said.

As a hobby on the side, Norwin Heimos started growing vegetables and flowers.

Of that decision, Stanley said, “This was the key to our today.”

The Sappington Garden Shop opened in 1967, and at that time a standalone garden shop was a novel concept. Today, the family has greenhouses on land along Eddie and Park Road and in several locations in Illinois. Those sell plants to wholesale vendors and will stay open after the garden shop closes.

“It has been a great honor and joy to be part of the St. Louis garden community for the past 50 years,” Stanley said. “We hope to see our wonderful customers shopping other independent garden shops in St. Louis. Remember a true gardener ‘plants dreams and grows love.’”