The hunt for a COVID-19 vaccine in St. Louis: A trip across the state that shouldn’t have happened 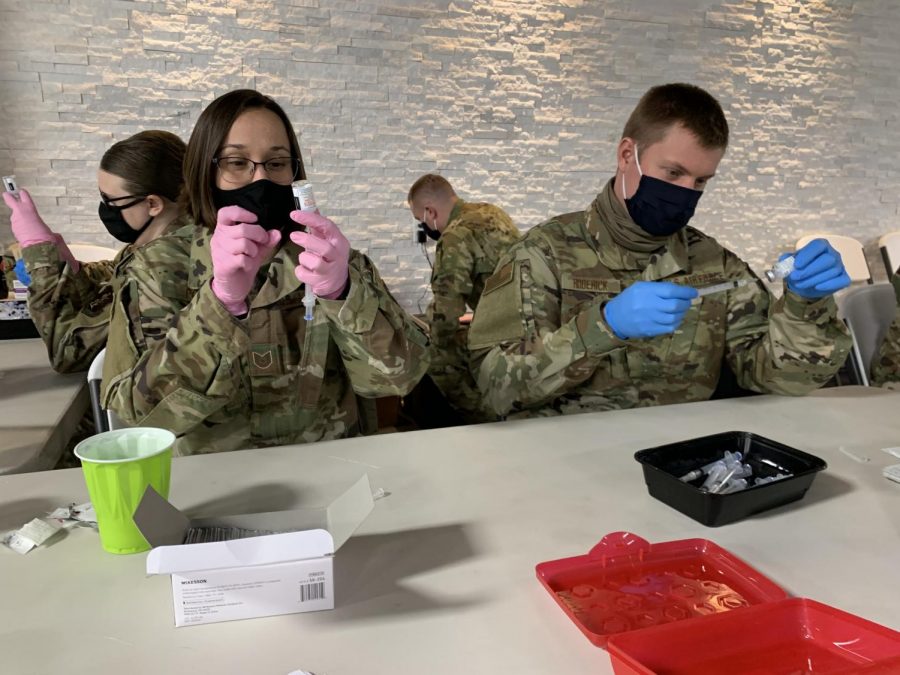 Members of the Missouri National Guard prepare doses of COVID-19 vaccine at a state-run mass vaccination site Feb. 23 in Canton, near the Iowa border.

Why Cape Girardeau? Why Poplar Bluff? Why Canton? Why Richfield? WHY? Like many of you, the hunt for a COVID-19 vaccine has taken my husband, Bill Milligan, and me to far-flung areas of the state.

Even that plan was delayed, after the February snow canceled an entire week’s appointments. Happily, the state invited us to drive 2 hours and 40 minutes to Canton, near the Iowa border, a week later, Feb. 23.

Nearly a month into being eligible, the only folks I talked with who had been successful in getting the vaccine had to travel outside their neighborhoods or even across the state because no openings were available to serve the needs of this state’s people in the cities. Leaving St. Louis seemed to be the only way anyone was receiving the vaccine, so off we went, almost to Iowa. We go back for the second dose next week.

Although we wish we could have found the vaccine in St. Louis instead, we were impressed with the tremendous effort put on by the Canton community: The Lewis County Health Department, Air and Army National Guard, Missouri State Highway Patrol, medical and administrative personnel and the local Missouri Baptist Relief volunteers worked together to move on from this pandemic. Later data showed that 370 of a total 1,620 doses went unused at the event, but they will be used later.

The vaccines are our long-awaited hope to fight the coronavirus and get out of this pandemic. That Missouri is wasting time and money while trying to accomplish a goal to protect its citizens is truly unforgivable.

The economy has a long way to full recovery, if we even know what that will be. But by placing the state’s most at-risk population at greater risk, asking them to drive hours across the state and not be able to get a vaccine anywhere near their home, the state is prolonging this pandemic.

Who except Gov. Mike Parson and other Missouri officials could ever think that holding a mass vaccine event in Leopold, population 65, was a good idea while St. Louis is ignored? It took hundreds of doses being wasted at that event and others for the governor to finally announce he will focus more on St. Louis, but even that won’t happen for weeks.

Wasted time, money and doses have been hallmarks of Parson’s vaccine rollout. A network of small rural communities hours away can’t be the best plan to vaccinate St. Louis.

We are grateful for our positive experience in Canton. But it didn’t have to happen that way.