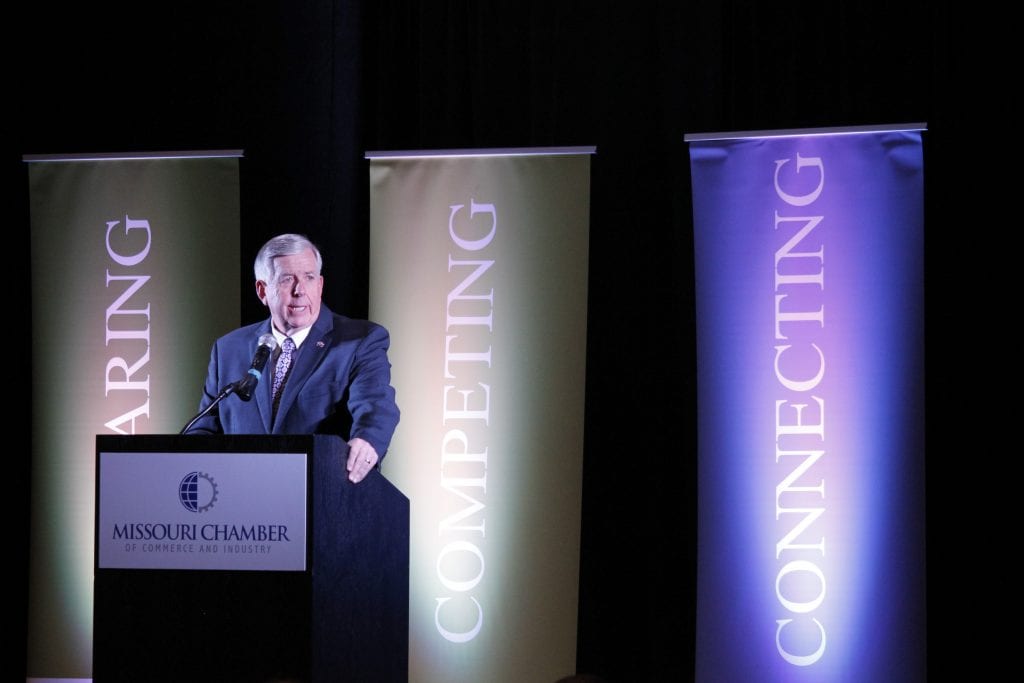 Gov. Mike Parson speaks with the Missouri Chamber of Commerce at the Renaissance St. Louis Airport Hotel to kick-off "Infrastructure Week" on Tuesday, Oct. 16, 2018. Parson, along with other bipartisan members of Missouri Legislature, are encouraging voters to vote yes on Proposition D, which would raise the fuel tax to provide revenue to repair roads and bridges. Photo by Erin Achenbach.

A gas tax on the ballot next week may be confusing at first glance, but a bipartisan coalition of lawmakers, including Gov. Mike Parson, are saying it’s the best chance to fix Missouri roads for decades to come.

Proposition D would increase Missouri’s gas tax by 10 cents over four years, with a gradual phase-in of 2.5 cents a year. If voters approve it, it would be the first hike to the state’s gas tax since 1992. At that time, a four-year phase-in went into effect, reaching the current 17 cents in 1996.

That 17 cents has lost 60 percent of its purchasing power to inflation, bringing it essentially down by a dime at the same time costs for materials like steel have doubled or tripled in price, said Scott Charton, spokesman for the committee behind the measure, SaferMO.com.

Missouri currently has the second-lowest gas tax in the country, but the seventh-highest number of both state roads and state bridges.

Once the 10 cents is fully phased in, Missouri will rank in the 30s among the 50 states on gas taxes, still lower than most of its neighboring states. A third of the gas tax would be paid by out-of-state drivers.

Parson said he recently visited a bridge in Kansas City that had to be closed because you could see chunks missing from the road.

“You look down and see the river, that’s a problem,” Parson said.

The ballot language earmarks money for local cities and counties for roads but, confusingly, also designates $280 million a year for the Missouri State Highway Patrol.

The explanation of that seeming contradiction is fairly straightforward, however, Charton said.

The Constitution already designates that money for the MSHP’s highway enforcement has to come from the Missouri Department of Transportation and the state road fund. So every year, the MSHP siphons away about $260 million to pay for its patrol officers.

With a new dedicated revenue stream from Proposition D, the MSHP would no longer have to take any of its budget from the road fund, which would free up that dedicated $260 million to actually spend on roads.

Voters overwhelmingly rejected the last attempt at money for MoDOT in 2014, but that was a general sales tax rather than a gas tax and was opposed by business interests because of the effect it could have on sales. This time around, both the trucking industry and the Missouri Chamber of Commerce and Industry are on board.

“We’ve got labor and we’ve got the Chamber of Commerce, and they don’t normally agree on anything,” Charton said.

Unusually for Missouri, Republican Parson is the biggest promoter of the gas tax, saying it’s necessary to keep up the state’s infrastructure. He appeared alongside union groups at a rally in St. Louis County Oct. 19 as part of a 15-city promotional tour.

Pointing to young apprentices at the rally, Parson said voters should approve the tax for the future generations of the state.

In forums last week, nearly all the candidates for the Legislature in south county from both sides of the aisle said they support the gas tax.

Rep. Doug Beck, D-Affton, said he voted for the amendment “reluctantly” because of the Highway Patrol pass-through.

Once the gas tax is fully phased in, the amendment will also direct $123 million annually to local cities and counties for their own roads and bridges. St. Louis County and its cities will take $16 million, while St. Louis city — and its own county — will get another $6 million.

Individual cities like Crestwood and Sunset Hills will get in on the action with new road funds that could either add to or replace their current spending on roads.

Language in the amendment creates a line item in the budget for a “Bottleneck Fund” to address the worst chokepoints of congestion for freight trucks in the state, but doesn’t provide any specific funding for that initiative.

The state already has its list of problem areas and projects to fix them, and the Legislature can place money into that fund on an ongoing basis until the fund builds up enough funds to tackle those $50 million projects.

The ballot language also includes another oddity — a clause that any medals won in the Olympics or prize money from the Special Olympics or Paralympics will not be taxed.

The reason for that is because of how the proposed amendment came about, Charton said.

“This came out of the Legislature, so hold on to your hat,” he said.

Lawmakers did not come to a bipartisan consensus on the gas tax until past the deadline to file a new bill. So they attached it to an Olympic bill that involved state revenue.

“Here’s what they were faced with: You can kick the can down the road another year, but there are going to be new lawmakers coming in November and they may not be for this proposal, and we have an agreement now, we’re for this,” Charton said. “They decided let’s not let the perfect be the enemy of the good.”

Still, as with any tax, the gas tax does have some opponents.

Missourians are just taxed too much, he said.

“We’re bringing in more money to Jefferson City than we ever have before,” he said. “I couldn’t stand with good conscience in front of you and actually ask for more money.”

One of the statistics that Prop D supporters use to make their case – that Missouri has the seventh-largest network of both roads and bridges in the country, but only the second-lowest gas tax to take care of them – as a reason to vote against a higher gas tax.

The state shouldn’t be taking care of those rural lettered roads, just as other states don’t, he said. He believes the law will ring up its cash in St. Louis County and spread the wealth to the rural roads in the state that no one drives on.

The money would be better spent on Interstate 70 or 270 instead, he said.