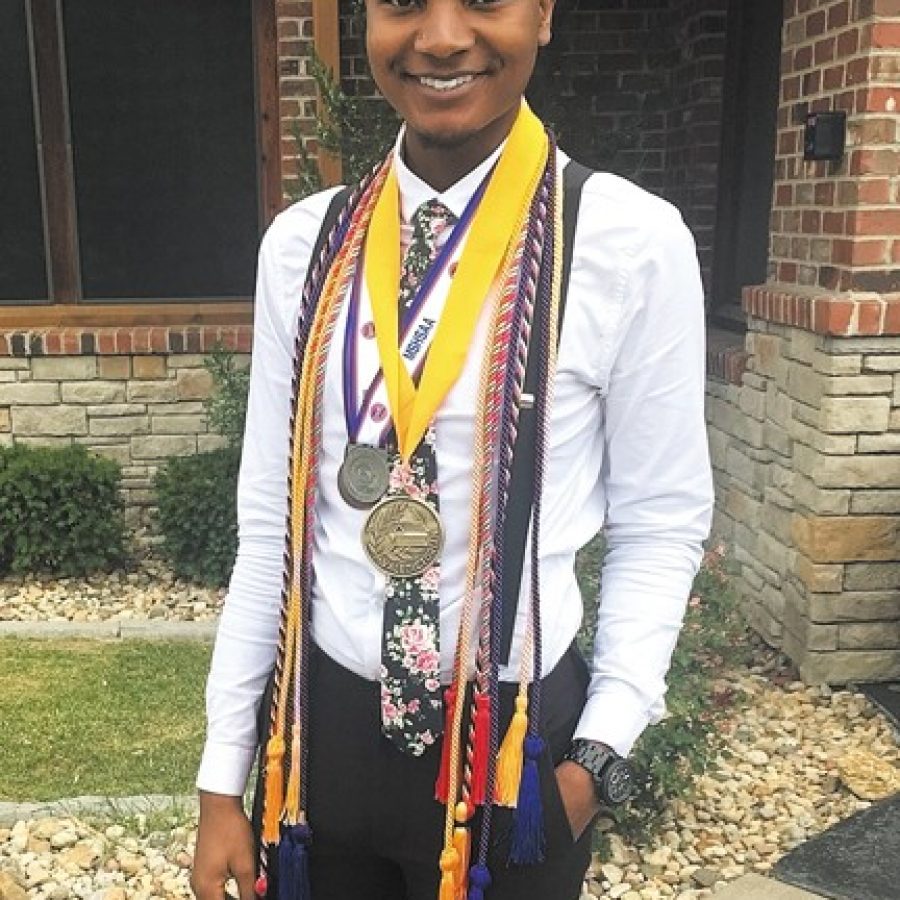 Graduates from south county schools are headed to colleges near and far this week, but even among thousands of accomplished students, one stands out: Oakville High School valedictorian Shaun Lamar is headed to Yale University with a full-ride scholarship.

Shaun, 17, earned a series of accolades in his years in the Mehlville School District, including national honors for four years on the Oakville High speech and debate team, National Merit Commended Student and Missouri 100 Scholar.

But his most impressive accomplishment might be the Ivy League. He heads to New Haven, Conn., this week to start school at Yale, one of the oldest and most selective universities in the country.

The Oakville senior beat the odds to gain admission with the help of the nonprofit organization QuestBridge, which links low-income students to highly selective universities.

Yale announced in December that it accepted 48 students through QuestBridge.

Getting into Yale is a daunting task in and of itself, but paying for it can be another challenge. Tuition and fees at the school top $47,600 a year without financial aid, or $66,445 including room and board.

But students who apply through QuestBridge are awarded full-ride scholarships.

Calculated over four years, Shaun’s award is worth $265,780 at current tuition rates.

The OHS graduate plans to major in molecular biophysics on the pre-med track, with the hope of becoming a neurosurgeon.

“I’ve always been intrigued by the brain,” Shaun told the Call. “I feel like it’s the last organ of the body we don’t know as much about as we do about other organs like the kidneys or the heart. So I’ve always wanted to figure that kind of stuff out.”

Superintendent Chris Gaines said he attended an event where a group of this year’s graduates was listing off their majors and scholarships, and Shaun stood out.

“We had all these top kids there talking about where everybody was going and what they were going to major in, and he was going to major in something where it’s like, ‘Really?'” Gaines recalled. “It was something-physics. And you’re like, ‘That’s a thing?’ It sounds like he’s a whole other level of intelligence, and you look at what his plans are.

“What a cool and amazing opportunity for a kid.”

To apply to an elite university through QuestBridge, students first have to apply through the organization and be selected as a finalist.

The organization works with finalists to apply to their top colleges. Shaun had never visited Yale or any of the universities he applied to through QuestBridge, none of which are in St. Louis.

He ranked Yale first, but also was accepted by Stanford University in Stanford, Calif., and Princeton in Princeton, N.J.

One of his essays focused on his experience as a Voluntary Interdistrict Choice Corp., or VICC, transfer student to Oakville, and the challenges and opportunities that living in one place and going to school in another brought to his life.

“I talked about how different my high-school experience was from everyone else at Oakville because I didn’t live in Oakville,” he said.

The son of Danielle and Shaun Lamar, who live in south city, Shaun began attending Mehlville schools as a first-grader at Blades Elementary, then Bernard Middle School and finally Oakville High.

The bus ride only took about 20 minutes, and was one of his favorite parts of the day in elementary school because he could talk with his friends.

But the commute became more of a challenge when he started high school and began participating in speech and debate and other clubs while taking the most rigorous course schedule possible.

“My experience wasn’t very negative, I would say that it was OK,” he said.

But he overcame obstacles that anyone torn between two worlds can relate to.

“That’s what I talked about in the essay — establishing my own racial identity was difficult in the age range that that typically happens in, I guess,” he said. “The people I talked to in elementary school were white because that’s the racial makeup of the school I went to.

“But I felt like going to school, I had to be a different version of myself than when I went home, and if those two versions of myself intersected, then I would have to choose. It took a long time to figure out who I am independent of what kind of environment I’m put in. It took a long time.”

Shaun’s older brother JT, 23, graduated from Oakville in 2012 and is now serving in the Peace Corps in Ecuador.

Although former board member Lori Trakas made a motion in recent years to end the VICC program because she contended that Mehlville’s test scores weren’t much higher than city schools, Shaun said he’s grateful for the opportunity he received from the VICC program and doesn’t believe he would have necessarily received a Yale-caliber education if he had stayed in SLPS.

At Oakville, he set out to achieve the most he could in high school and intentionally took Advanced Placement, or AP, and college-level classes, including some from the district’s Project Lead the Way project-based learning curriculum. He refocused on academics after a few rough patches in middle school.

“I resolved freshman year to fix that and push myself to do as much as I could,” Shaun said. “I took all honors courses, AP courses and just decided that I wasn’t going to settle anymore for less than what I knew that I could do.”

He never stopped pushing himself, taking all AP courses his senior year. He was ranked second in his class when he applied to colleges, but moved up to the top spot later in the year.

Much of his success can be traced back to his competition in Lincoln-Douglas debate and other aspects of the OHS speech and debate team, which was started several years ago on a shoestring budget compared to other schools but has earned national recognition.

City schools do not have debate teams, or if they do, they don’t participate in the National Speech & Debate Association, the primary organization overseeing high-school speech teams.

Speech and debate also requires students to hone their writing and argument skills, which translates well to the college essays needed to get into top universities, Shaun said.

Along his path to Yale, he was helped by teachers, counselors and other students who served as editors and sounding boards for his essays.

“This isn’t something that I did alone,” Shaun said. “I want everyone who has helped me to know that I needed their help sincerely, and I’m very appreciative of it.”